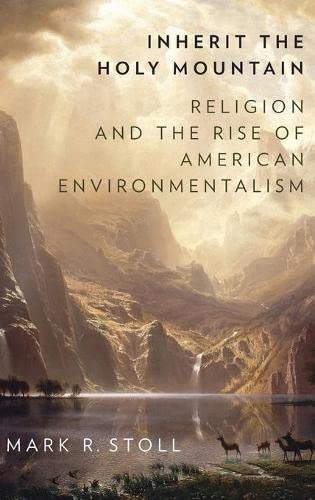 Inherit the Holy Mountain: Religion and the Rise of American Environmentalism

Since the 1960s there has been a significant ongoing debate over the relationship between Christianity and the environment. Some argue Christianity promotes degradation of nature while others see biblical faith as an encouragement to love God’s creation. Mark Stoll’s recent book, Inherit the Holy Mountain: Religion and the Rise of American Environmentalism, tends to support the argument that Christianity has the theological foundation to encourage beneficent treatment of the created order. His thesis is that there is a close relationship between the religious heritage of many activists and environmentalism in the United States.

The book is divided into eight chapters bookended by an introduction and conclusion. In Chapter 1, Stoll argues that Calvinism provides the theological foundation for environmentalism. Nature is valuable because God created it and it points toward his goodness. This led the Puritans to practice an ethic of conservation as an act of worship toward God. This theme is developed further in the next two chapters. In the second chapter, Stoll highlights the impact the Calvinist theology of creation led to the conservation movement. The Puritans planned their land distribution and usage to improve it, set aside space to provide opportunity for future generations, and gain economic benefit without wanton destruction. There was a sense that creation had utility, but it was to be respected and used wisely. The roots of the later conservation movement can be traced to these ideals. In Chapter 3, Stoll further expands on this notion by exploring the moral influence of later colonial and post-colonial Calvinists on the eventual founding of the National Park system in the United States. Gifford Pinchot, the staunch conservationist whose position was contrasted to John Muir’s wilderness preservationism, came from the Calvinistic tradition which led to his view of wise usage of natural environments. Throughout these chapters, Stoll carefully weaves together theological insights with a historical narrative.

Chapter 4 brings the history well into the Twentieth Century discussing the work of Ansel Adams in celebrating the beauty of American national parks. Adams and others were participants in what Stoll calls an “Emersonian Modernism” that sought for transcendental experience through the observation of landscape. Though not Christian, there was a distinct religious bent to this part of the American environmental movement. The fifth chapter details the work of progressive Presbyterians in conservation. Stoll appears to define progressive here as those interested in social action as much as or more than theological conformity. His main claim in this chapter is that many Presbyterians were instrumental in the conservation movement in the late Nineteenth and early Twentieth centuries. Stoll demonstrates that their interest, like the earlier Puritans, was built upon their Calvinistic worldview. For example, until the middle of the Twentieth Century, most of the men serving as Secretary of the Interior were Presbyterian or Congregationalist. According to Stoll, their religious worldview enhanced their interest in creation care rather than diminishing it.

In the sixth chapter, Stoll shows how Southern Presbyterianism drifted into a pursuit of good stewardship of personal property instead of concern for collective action. The decline of Presbyterianism as a percentage of the population also led to the decline in its role in environmentalism. Yet, according to Stoll, there is much that the Calvinistic framework of Presbyterianism gave to the environmental movement. Chapter Seven gives an overview of the contributions of many non-Calvinists—Baptists, Transcendentalists, and Quakers—to environmentalism. Because of the very non-conformist roots of these religious movements, they tended to encourage independent action rather than seeking government policies to improve the environment. Still, they had from their religious foundations a firm interest in seeing creation treated well. In the eight chapter, Stoll outlines more recent contributions of African-Americans, Catholics, and Jews to contemporary environmentalism. These theologically diverse social and religious movements have taken greater interest in structural evil and sought changes in society instead of merely improving individual attitudes toward the environment.

Stoll covers a wide swath of American religious history and exposes the tender roots of modern environmentalism in theological movements that did not address the issue in contemporary categories. He does this with care and theological accuracy uncommon in environmental histories. The result is a masterful portrait of America’s religious traditions that illuminates already existing themes instead of imposing them. Stoll’s book is a treasure to the Christian theologian and the environmentalist. It helps explain some of the quasi-religious language of the environmental movement as it developed within a culturally Christian American context. The breadth of the history tends to enhance Stoll’s endeavor more than a project focusing narrowly on a few handpicked figures might have; the reader is presented with witness of both the substance and trajectory of the major theological movements across American history.

The weakness of this volume, such as it is, rests in Stoll’s treatment of conservative Evangelicals who have resisted aspects of the contemporary environmental movement. He traces the history of their skepticism, but fails to note that the resistance is tied into the ethical implications of some proposals from environmentalists, which sometimes include the advocacy for population control measures like abortion. In one specific example, Stoll argues for the novelty of recent Southern Baptist interest in environmentalism while failing to note the five previous resolutions passed by the Southern Baptist Convention that encourage faithful stewardship of the environment. These gaps, however, represent minor defects in an otherwise outstanding theological and historical treatment.

This book fills a need in the study of the relationship between Christianity and environmentalism. Stoll’s approach is responsibly critical. His insights advance the conversation. As such, faithful Christians seeking to understand the historic ties between their faith and the green movement will find this text invaluable.