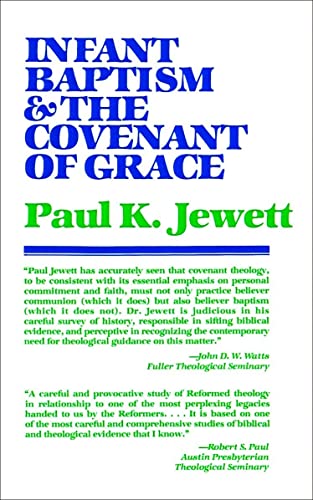 Infant Baptism and the Covenant of Grace

Paul King Jewett, Professor of Systematic Theology at Fuller Theological Seminary, has produced a very well-written, well-argued treatise on infant baptism. In opposing the practice current in many large branches of Christendom, Professor Jewett has remained generally irenic in tone, but firm in logic. Before entering into the arena of argument the author draws up several important positions which anchor his approach as well as give direction to the attack (p. 4ff). He rejects the ‘causative-sacramental’ understanding of baptism and takes a firm biblical stand explaining the outward rite as a ‘cognitive-symbolic one’ (p. 4). This limits the discussion primarily to the Reformed and Calvinistic tradition, rather than the sacramental approach held by Roman Catholics, the Eastern Orthodox, etc.

Jewett divides his work into three major divisions; ‘A Consideration of the Historical Question,’ ‘A Consideration of the Theological Question,’ and ‘Believer Baptism Defended and Expounded in Terms of Covenant Theology’. In discussing each of these areas Professor Jewett has judiciously appraised the major arguments of those favouring infant baptism, giving special attention to the works of such modern scholars as Karl Barth, Joachim Jeremias, Kurt Aland, Oscar Cullmann, John Murray, G. W. Bromiley, and others.

Without robbing the reader of the pleasure of an exciting first hand encounter with this stimulating work, a few of the major arguments should be mentioned in order to ‘whet one’s appetite’. Jewett points out, for example, that there is practically no apostolic example of infant baptism. The historical examples are prominent around ad 400 and become less and less frequent as one moves towards the source of Christianity. Another point stressed over and again by Jewett is that it is inconsistent to baptise infants who are incapable of faith and then withhold communion from them because of lack of spiritual discernment (see e g., the chapter ‘Infant Baptism and Believer Communion’, pp. 193–207). In this connection it is pointed out that the Bible always requires faith and repentance as a prerequisite for baptism, but it is obvious that an infant cannot meet this requirement. Jewett aptly points out the logical weakness of the mental and logical gymnastics of those who try to steer around this formidable obstacle by such things as ‘infant faith’ or ‘vicarious faith’. (See especially pp. 160–85.) With the same astute exactness the matter of ‘household baptism’ is adequately handled (pp. 47ff), and shown to have no biblical foundation. Jewett also scores telling blows in pointing out that a favourite text of the paedo-baptist (Mark 10:13–16) has nothing to do with either water or baptism (pp. 55ff)!

In tackling the problem of equating Old Testament circumcision with New Testament baptism, the Covenant Theology position of Jewett shines through the clearest, but seems to this reviewer to be the dimmest and weakest of the whole book. It only leads to fuzzy and confused theological thinking to try to equate the theologically engendered Covenant of Grace with such biblical covenants as God’s Covenant with Abraham, God’s Covenant with Israel through Moses, God’s Covenant with David and the New Covenant. The underlying covenant concept of the Old Testament in the lives of the people and the messages of the prophets was based on these biblical covenants. The attempt to answer the paedobaptist equation of Old Testament circumcision with New Testament baptism by appealing to a unifying revelation of redemptive history in which the Old Testament is viewed as essentially materialistic in nature and the New Testament as essentially spiritual, seems extremely questionable. It would appear that Beasley-Murray’s arguments on this point are much more convincing. This work of Jewett’s is highly recommended on the subject of infant baptism as being a fair, thorough and factual answer to the paedobaptist position: however, the Covenant of Grace elements of the Reformed position seem somewhat weak.

by Carl Armerding
VIEW ALL VIEW ALL

Paul: An Outline of His Theology

The search for salvation

The Christology of Hegel

Reviewed by Eckhard J. Schnabel
Philosophy
VIEW ALL VIEW ALL