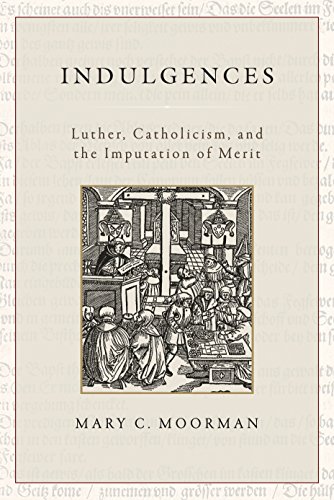 Indulgences. Luther, Catholicism, and the Imputation of Merit

This work addresses the concept of indulgences in what seems to be an attempt to question Luther’s rejection of papal authority in connection with the indulgence question. It argues that Luther wrongly “absolutized” the logic of Roman Catholic teaching on indulgences (p. 312), failing to recognize the doctrine and practice of indulgences as a logical outcome of biblical teaching on the covenantal relation of God with his people and on the church’s being Christ’s bride. Moorman also provides a detailed interpretation of the theology of indulgences in the thinking of Thomas Aquinas. However, in all of this, Moorman fails to engage adequately with what Luther actually thought and wrote. Additionally, this study overlooks significant recent scholarship, and some key terms are insufficiently defined or not at all spelled out.

Among these terms is “the Church.” It is clear that by “the Church,” Moorman means the hierarchy under the papacy as the priestly office, which mediates Christ’s work to the faithful and empowers their satisfaction of God’s expectations for human performance in response to his grace. Such a definition of the “Church” is vital for Moorman’s argument since, in the end, she concludes that “Luther’s objections simply amount to an objection to the Church’s claim to act as the sort of agent who can exercise authority over the merits of Christ for her members” (p. 312). This is partially correct. However, it misses the profound issues that Luther raised regarding indulgences and their theological framework. The context for that observation lies in a fundamental historical development ignored in this study, namely the Wittenberg reformer’s understanding of reality, or in Moorman’s terms, his relationship ontology—a view of reality that ultimately and immediately rests on God’s creative and re-creative Word.

Luther’s objection to indulgences arose from two sources. First, his activity as an Augustinian friar took him into the confessional in churches around Wittenberg. There, he encountered claims of immunity to the Church’s ministry due to Johann Tetzel’s offer. Second, his redefinition of what it means to be Christian reoriented his entire thinking about reality. He grew up in a world that retained the pre-Christian structures of religion that placed human approaches to God primarily through ritual actions directed by the hierarchy at the heart of Christian belief and practice. He found his approaches to God always inadequate to the demands of his conscience. But his biblical study convinced him that God comes to sinners, initiating and maintaining a relationship with them grounded in fundamental trust in the promise of new life through Christ’s death and resurrection.

This led him to another view of reality: that the Word of the Creator, in all its forms, determines what is real. Absolution, God’s promised reality, as mediated by any believer, is a re-creating Word. By fashioning trust in Christ, it transforms sinners into God’s children. The Word in oral, written, and sacramental form reconstitutes believers’ identity in Christ, and trust in Christ constitutes their righteousness. This passively received righteousness issues into the active righteousness of the godly life when the faithful believe what God says about them.

The Aristotelian world of Thomas, as Moorman clearly shows, is a world of an ontology of human performance and merit. Luther asserted that reality flows from God’s speaking. God relates to human creatures as creatures on the basis of their trust in him—a fundamentally different definition of faith and its role in being human. Thus, Luther’s views did not follow the logic of Roman Catholic theologies of indulgences; they broke the paradigm. Because Moorman has not grasped Luther’s way of thinking but rather tries to force him into Thomas’s, her study fails to facilitate a fair discussion of how these two worlds meet. This ecumenical exchange is sorely needed in a world where all kinds of Constantinian institutions no longer serve.

Systematic theologians are part of an ongoing conversation and use the voices of the past, mediated with contemporary scholarship. Significant elements of contemporary scholarship, beginning with work on Luther himself by Reinhard Schwarz, Oswald Bayer, Hans-Martin Barth, and others, are ignored. Critique of the “new interpretation of Paul” by John Barclay and others (such as Tom Holland, whose work may have appeared too late for Moorman to see), as well as the movement of scholars beyond this discussion go unmentioned. One brief reference to Dietrich Bonhoeffer interprets him against the grain of his commitment to Luther’s teaching, as shown by Michael de Jonge. Particularly curious is the absence of reference to Bernd Hamm’s studies of medieval “theologies of piety,” especially his careful analysis of the development of indulgence doctrine and practice in fifteenth-century German-speaking lands, the heart of Moorman’s “region of the Holy Roman Empire, the Netherlands, and southern France” in which indulgence practice provided a foil for Luther’s critique (p. 220).

Moorman initiates a much-needed discussion in the household of faith. Still, it cannot be conducted without a recognition of the two different ontologies that are represented in Luther’s “evangelical breakthrough”—a maturation over a decade—and the medieval scholastic structures which were reasserted in certain ways by some Protestant theologians in the seventeenth century, alongside their continued use in Post-Tridentine thinking.