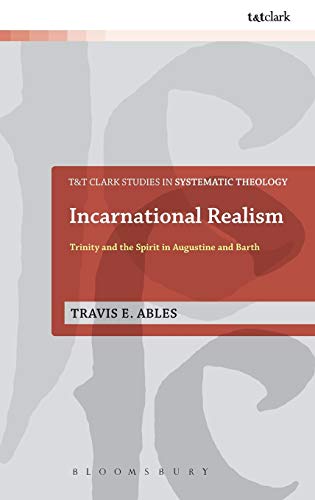 Incarnational Realism: Trinity and the Spirit in Augustine and Barth

Travis E. Ables’s Incarnational Realism is the published edition of his 2010 dissertation at Vanderbilt University: “A Pneumatology of Christian Knowledge: The Holy Spirit and the Performance of the Mystery of God in Augustine and Barth.” As his published subtitle suggests, the text is a sustained reflection upon Augustine’s and Barth’s doctrines of the Trinity and their enduring influence on contemporary Trinitarian theology. The project, however, is not simply historical. Ables’s discussion culminates in a robust development of the Spirit’s activity in Christians attaining knowledge of God.

Ables’s dense discussion begins with a brief consideration of the revival of Trinitarianism in the twentieth century, a revival complicated by its perceived neglect of the Holy Spirit. His discussion features a correction to the common misconception that Augustine’s psychological analogy for the trinity is the primary offender of pneumatological negligence. Thus, Ables spends two chapters offering a re-reading of Augustine’s psychological analogy in De Trinitate. His reading suggests that the psychological analogy is not really an analogy at all. Memory, knowledge and will are not analogous to the persons of the Trinity in themselves. Rather, the correspondence of the mind’s memory, understanding and willing (or loving) to the movements of the persons of the Trinity is really about how the Father, Son and Holy Spirit involve humanity in God’s knowledge of himself (p. 39). For example, in willing, knowledge becomes action. When such action—willing or loving—is oriented toward God, it is the action of the Spirit working in us.

In turning to Barth’s Trinitarian theology in the Church Dogmatics, Ables is again particularly concerned with articulating Barth’s pneumatology. The concern with Barth is that he does not grant the Spirit the same “density of personhood” as the Father and the Son. The reduction of the Spirit to the Augustinian “bond of love” between the Father and Son amounts to “an erasure of the Spirit as a subject of divine action” (p. 105). In refutation of this criticism, Ables argues that in actuality the work of the Spirit is the crux of Barth’s dialectic of revelation.

Ables’s final chapter draws the project to a close by zeroing in on the Spirit’s contribution to human participation in Christ. This construction of a pneumatology that is at the same time robustly christological is the greatest contribution of his text. This is accomplished by his title phrase, incarnational realism. If human knowledge of God is made objectively possible by the incarnation, its successful communication is accomplished—realized—by the Spirit’s performance of conforming our lives, and not simply our minds, to that knowledge. In this sense, knowledge of God, like pneumatology, is not a body of ideas and information—i.e., a doctrine—it is action.

As noted, the strengths of Ables’s text are his mastery of the Augustinian and Barthian sources relevant to his task. He penetrates the accepted scholarly consensus both on Augustine and Barth in ways only possible to those who truly understand the fabric of their thought. He demonstrates this in the corrective he offers to reading Augustine’s psychological analogy and in articulating the complexities of Barth’s theological ontology.

Though the argument for re-reading the psychological analogy is compelling, I did not find his dismissal of the “bond of love” pneumatology in Augustine as convincing. He concedes Augustine’s use of the language but argues that Augustine’s doctrine of simplicity precludes the understanding it has maintained in traditional readings of Augustine. Some may wonder whether Ables’s coordination of Augustine’s “bond of love” pneumatology and divine simplicity is the only possible reading (pp. 94–101).

In any case, such concerns do not deter me from enthusiastically recommending this book to those interested in Trinitarian theology and the Spirit, especially those interested in Augustine and Barth. Indeed, it will be a significant book for future conversations on these topics.