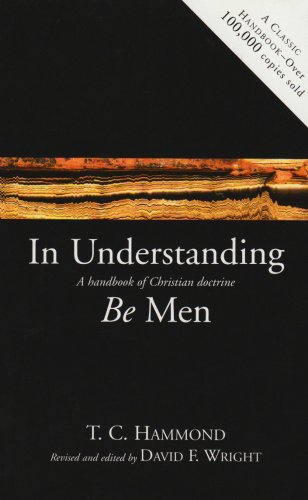 In Understanding Be Men

I still have on my shelves the copy of In Understanding Be Men bought nearly forty years ago. for the princely sum of seven shillings and sixpence, in my first term at university. It was already into its fifth edition (1954), having originally been published in 1936. Now IVP has issued the sixteenth reprint (1999) of the sixth edition (1968), which David F. Wright of New College, Edinburgh, revised over thirty years ago. His changes were mainly concerned with the study questions, arrangement of some of the material and some ‘updating’, particularly the bibliographies that accompany each chapter. All of this bears testimony to the fact that T.C. Hammond’s ‘handbook of Christian doctrine’ is a classic of twentieth century evangelicalism, which not surprisingly has sold over 100,000 copies.

Beginning with an introductory section on the importance of Christian doctrine, some lucid theological definitions, and a brief survey of church history from a theological perspective, the handbook proper launches straight into the doctrine of Scripture, entitled ‘Final Authority in Matters of Faith’. It proceeds, in classic style, from the doctrine of God, through man and sin, to the person and work of Christ and the doctrine of the atonement. Hammond then turns to the person and work of the Holy Spirit, concludes with sections on the Christian in the Church and the last things. The style is always clear and explanatory, thoroughly supported from Scripture, and sets out both to warm the heart and energise the will, as well as informing and clarifying the mind.

The methodology in each section is standard, though its order and pattern change from subject to subject. First, there is a clear statement of the evangelical view, supported by a wide range of Biblical texts and quotations, with special attention given to technical terms and specialist vocabulary. Here the intention is to define as clearly as possible what the Bibles does and does not say. Alternative views are then considered both from an historical and a contemporary (1936) standpoint. For example, in the section on the ‘Divinity and Humanity in the one Person of our Lord’, there are useful summaries of the ‘problems’ involved, such as the hypostatic union, the ‘communion of the properties’ and kenosis theory. Each is expressed in non-technical terminology and the reasons for the particular difficulty elucidated. The historical survey has brief summaries of Docetism. Arianism and Nestorianism, concluding with the Chalcedonian formulation. Each section then ends with a list of Scriptures to be studied and a set of questions, answers to which the student is recommended to write out ‘without reference to this book’! A bibliography concludes the section.

Obviously, the handbook was compiled with the general student in view, not the specialist in theology or religious studies. It is perhaps a measure of the shift over sixty years that it is much more likely to appeal today to the student of theology, and to be regarded by the non-specialist as too complex and demanding. Certainly, it provides a useful summary of many issues which any course in Biblical studies or theology must address. But what a great thing it would be to find today’s CU members wanting to take it up and study it in the way that T.C. Hammond originally envisaged. Much of today’s weakness and superficiality in the churches derives from a prevailing attitude that does not want to be bothered.

It might be justly argued that Bruce Milne’s Know The Truth has largely replaced Hammond, and that is probably why IVP has not initiated a seventh edition. Certainly the bibliographies and the wording of some of the questions begin to look very dated. Yet this title remains a ‘classic’ and one that will still repay the study and application it deserves.