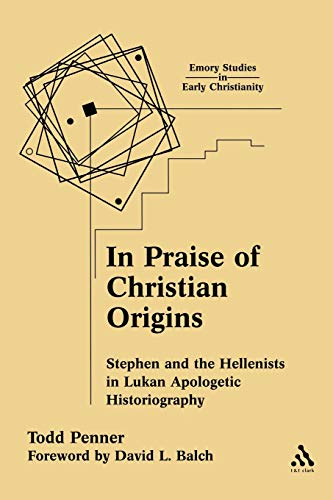 IN PRAISE OF CHRISTIAN ORIGINS: STEPHEN AND THE HELLENISTS IN LUKAN APOLOGETIC HISTORIOGRAPHY. EMORY STUDIES IN EARLY CHRISTIANITY, VOL. 10

This monograph is a revised version of Penner’s doctoral dissertation completed at Emory University. The work is a rhetorical study of the controversial Hellenists narrative found in Acts 6:1–8:3. Penner begins by providing a review of previous literature. He complains that the bifurcation between Luke the historian and the theologian has not helped in understanding the Hellenists’ narrative. Martin Hengel—believing that there was a core of historical factuality behind the account—opined that it was possible to discover a link between the teachings of Jesus and those of Paul. Dibelius, on the other hand, observed the speech of Stephen in Acts 7 and concluded that it was either heavily redacted or created ex nihilo by Luke the theologian: hence the split between the historical and theological dimensions of Luke. Penner suggests that it may be more fruitful to join the two and conclude that Luke was an ‘hagiographical historian’ (58). But is there warrant in ancient historiography for such an ideologically loaded work? Penner answers this question affirmatively in the third chapter. In this inquiry into the nature of ancient history. Penner examines a range of historians from Thucydides to Lucian. He draws the following conclusion: first, ancient history had greater rhetorical (persuasive) aims that we often allow for. Second, ‘truth’ in ancient historiography was socially constructed: what counted as ‘truth’ was not necessarily what actually had happened but what the polis expected to have happened. This conception of ‘truth’ is therefore ‘fundamentally different’ from ours (178, n. 78). Lastly, Penner posits that for ancient readers the value of an historical work was not found in its adherence to factual events but on its pedagogical value.

Ancient historia, however, was a very broad field, and therefore Penner attempts to specify the precise category of Luke’s history: in chapter four he suggests that it fits well in the camp of Jewish apologetic historiography. Two features of this literature are its retelling of the Exodus tradition and its preference for an ‘epideictic’ form of argument rather than ‘forensic’. This type of historiography, moreover, was aimed at ‘insiders’ and was meant to amplify the legitimacy of the Jewish religion. It is suggested that this apologetic history serves as background to Luke’s historiography.

Penner draws all the threads together in chapter five and reaches the conclusion that Acts 6:1–8:3 is an epideictic narrative (including the speech) which seeks to ‘demonstrate the superiority of the nascent Christian movement’ (330). Luke’s aim is to ‘affirm the readers in their knowledge that the Christian movement represents the true line of development from Abraham-Joseph-Moses-David to the time of the apostles and Paul’ (ibid).

Penner’s work is to be commended. His criticisms of the exaggerated optimism of the historical-critical method is persuasive. Further, his proposal to view Acts as indebted to Jewish apologetic historiography should be applied further in light of Luke’s Jewish philosophy of history. Ultimately, however, Penner’s provocative work is unconvincing in its two most stimulating suggestions: the nature of ancient historiography and the rhetorical category of the Hellenists’ account. His proposal that ancient historiography is fundamentally different from its modern counterpart is exaggerated: a history is not rendered inaccurate because it has rhetorical aims (and is there any history, ancient or modern, which does not have rhetorical aims?). Lastly, Penner’s proposal that the narrative of the Hellenists is exclusively epideictic is reductionist. To be sure, there are epideictic elements in the speech. However, there are also unavoidable forensic features: plaintiffs, defendants, judges, and an audience. It may be better to state that the speech contains both epideictic and forensic elements, something which is not unusual in ancient speeches.