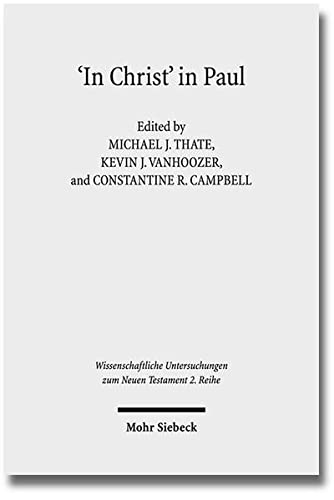 “In Christ” in Paul: Explorations in Paul’s Theology of Union and Participation

The preface to “In Christ” in Paul (ICIP) billboards the editors’ hope that this volume will brook fresh avenues of research in the study of “union/participation” in Paul’s letters (p. v). Kevin Vanhoozer’s introductory essay—“From ‘Blessed in Christ’ to ‘Being in Christ’” (pp. 3–33)—helpfully orients the reader to the compilation by articulating both its organizational strategy and telos. Organizationally, ICIP consists of three parts, building chronologically from “Pauline Theology and Exegesis” to “Some Highlights from Reception History” and concluding with “Theological Reflection.” Teleologically, the volume seeks to deepen current discussions and to midwife new ones through detailed exegetical, historical, and theological investigations.

Part 1 hosts essays on “Participation and Faith in Paul” (D. Campbell), “Metaphor, Reality, and Union with Christ” (C. Campbell), “Incarnational Ontology and the Theology of Participation in Paul” (G. Macaskill), “Oneself in Another: Participation and the Spirit in Romans 8” (S. Eastman), “‘Real Participation’: The Body of Christ & the Body of Sin in Evolutionary Perspective” (M. Croasmun), “Baptism and Union with Christ” (I. Morales), “Paul’s Corporate, Cruciform, Missional Theosis in 2 Corinthians” (M. Gorman), “Paul and the Anxieties of (Imperial?) Succession: Galatians and the Politics of Neglect” (M. Thate), “Sharing the Heavenly Rule of Christ the King: Paul’s Royal Participatory Language in Ephesians” (J. Jipp), and “Paul, Φρόνησις, and Participation: The Shape of Space and the Reconfiguration of Place in Paul’s Letter to the Philippians” (M. Thate). Not only is this section the lengthiest of the three, but it also contains the most avant-garde arguments and thus produces the most grist for further dialogue. Douglas Campbell, for instance, once again antagonizes the status quo in Pauline Studies by disavowing the legitimacy of rendering “faith” in Paul as a confessional designation. We need rather, he argues, to interpret it within a participatory frame, for only in so doing can we account for the “confessional, emotional, and ethical” nuances which it recurrently carries (p. 58).

Part 2 treats “Two Early Perspectives on Participation in Paul: Irenaeus and Clement of Alexandria” (B. Blackwell), “Augustine and Participation: Some Reflections on His Exegesis of Romans” (D. Sarisky), “Apocalyptic Union: Martin Luther’s Account of Faith in Christ” (S. Chester), “The Fatherhood of God & Union with Christ in Calvin” (J. Canlis), “‘One with Him in Spirit’: Mystical Union and the Humanity of Christ in the Theology of John Owen” (T. Baylor), and “Karl Barth’s Reading of Paul’s Union with Christ” (K. Johnson). Though this section pays (shockingly!) disproportionate homage to the history of Protestant interpretation, the articles are well executed, by and large. The pieces by Blackwell and Canlis headline the bunch. Blackwell, extending his sterling research into the patristic characterizations of “participation,” lends credence to Richard Hays’s recently proposed “four models of participation” through careful examination of two figures: Irenaeus and Clement of Alexandria. Canlis challenges the spate of publications highlighting Calvin’s conception of “union with Christ” by suggesting that this current absorption (and the in-fighting which it has generated) shrouds Calvin’s grander concern with adoption by the Father.

Part 3, lastly, takes what Vanhoozer describes as a “pastoral” turn (“From ‘Blessed in Christ,’” p. 12) with its analyses of “Fitting Participation: From the Holy Trinity to Christian Virtue” (A. Varma), “Participating in the Body of Christ: Christian Κοινωνία and the Lord’s Supper” (M. Patton), and “Until We Are One? Biopolitics and the United Body” (D. Singh). Singh’s piece is especially noteworthy. Building upon the limpid averral that “union in Christ is a lived reality, a reality hazarded” (p. 529), he attentively examines “the discourse of the body and its links with concerns about contamination, tracing Paul’s language and the legacy it may have conveyed to modernity” (p. 539).

For all of its virtues, ICIP merits critique on several accounts. First, the book is undoubtedly cost-prohibitive. Several of the pieces in particular warrant wide circulation, but the expense will problematize the dissemination process and may hamper the book’s general impact. Second—and at the risk of pedantry—I found an unusually high number of typographical (e.g., “laubensverständnis” for “Glaubensverständnis,” “concerend” rather than “concerned,” “Theiselton” instead of “Thiselton” etc.) and formatting (e.g., missing italicizations, differing font types and sizes, straight rather than curly quotation marks, etc.) mistakes in the book. Not only is this distracting for the reader, but it will also prove provoking for those who fork over the small fortune necessary to acquire the volume. Third, it is surprising to consider the luminaries in the field who are not included in the collection (e.g., James Dunn, Morna Hooker, Stephen Fowl, or even more recently M. David Litwa). While I applaud the editors’ decision to create space for up-and-coming scholars, I nonetheless regretted not hearing from key figures who have had their finger on the pulse of the discipline for decades. I cannot help but wonder, moreover, if this might not undercut the editors’ aspiration to provide a “substantial new contribution” (p. v, emphasis added). Fourth, ICIP includes contributors from a narrow stream of scholarship. By my count, nearly half of the contributors have some past or present affiliation with Trinity Evangelical Divinity School, almost all were either raised or currently reside in the United States, and (perhaps most staggeringly) only one non-Protestant was included in the mélange. How might the study of “union/participation” in Paul be enhanced were it open to the critically constructive, constructively critical witness of the Other?

These critiques notwithstanding, ICIP is nevertheless a volume that anyone interested in the discipline will want to get their hands on. The authors’ thoughtful engagement with Paul’s “union/participation” motif from assorted vantages purchases long-term value for the collection. Moreover, several of the more provocative essays in ICIP (e.g., D. Campbell’s, Morales’s, and Singh’s) may well lay foundations upon which conference papers, journal articles, and even dissertations build.