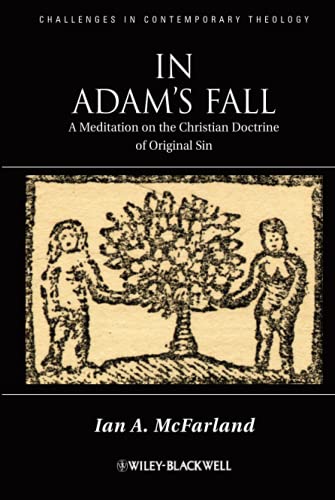 In Adam’s Fall: A Meditation on the Christian Doctrine of Original Sin

Most Christians will not have the time or the money to invest in this new book by Ian McFarland (see his earlier works Difference and Identity [Pilgrim, 2001] and The Divine Image [Fortress, 2005]). Like many academic books, it is dense, nuanced, tough-going in places, and therefore fatefully unsuited for bedtime or casual reading. But don’t be deceived—it is an important book, a fresh and insightful interpretation of Augustine’s doctrine of original sin. McFarland actually likes Augustine’s doctrine and wants to bring it back in style, though he trims away what he considers weaknesses in traditional formulations (p. xi). Since it would take too long to give a full summary of his argument, I will simply highlight five themes that may be of interest to readers of this journal.

The first two chapters clarify why Augustine’s doctrine of original sin beats out all the other competitors (McFarland criticizes in different ways thinkers like Schleiermacher, Kierkegaard, Niebuhr, and C. Plantinga). Augustine’s insight is that we are radically responsible for sin and radically powerless in the face of sin (p. 18). Since we all need salvation through the atonement of Christ, we must all be congenital sinners (pp. 33–35). This theme recurs throughout the book: We all need salvation because of our original sin. Indeed, original sin cannot be separated from the gospel itself, and the flip side of the gospel is the doctrine of “total depravity,” which McFarland therefore defends tooth and nail (p. x).

The second theme appears in Part II (chs. 3–5) and might be the most interesting part of the book. McFarland uses Maximus the Confessor to teach us a different way to think about “sinfulness” and “fallenness.” Here’s how the argument goes: Augustine, at his best, realized that human willing always follows human desire. That is how we are human. We do [i.e., will] what we desire, but we cannot change those desires by our own effort—so we need God’s grace. The insight is anti-Pelagian since our “willing” is not independent and disconnected from our desiring. But Augustine was not always consistent, McFarland claims, which is where the book’s hero, Maximus, comes in (in the sixth century, he defended the orthodox view that Christ had not one but two wills—divine and human). Maximus made a key distinction between nature and hypostasis. My human will is simply part of my human nature. It is what makes me a rational agent. But it is not my identity; it is not the source of who I am, the real me (i.e., my “hypostasis”). The source of my hypostasis is God. This raises a problem, however: Since original sin teaches that the human will is congenitally opposed to God, does this view imply that God created the human nature as evil? Are our human natures sinful? McFarland denies this inference in the strongest terms. His response is crucial: our human natures are fallen but they are not sinful. He draws this insight from his understanding of Christology (following Irving, Barth, and others): Christ was fallen but not sinful. “A nature can be damaged (and thus fallen); but a nature cannot sin, because sin is ascribed to agents, and thus is a matter of the hypostasis” (p. 128). All of us have a fallen nature, which also implies that we have a sinful hypostasis. But this is not true for Jesus because his hypostasis is the Second Person of the Trinity, and so his sinless divine hypostasis “nullifies the fallenness of his (human) will” (p. 129). On this view, Jesus has a fallen nature, but his hypostasis is sinless. Many Christians will find these claims jarring because, traditionally, if you are fallen, you are by definition sinful. Augustinian realism and Reformed federalism are both flawed, McFarland thinks, because they conflate fallenness and sinfulness and thus miss the distinction between nature and hypostasis (p. 130).

This distinction paves the way for the third theme: McFarland rejects the historical fall of Adam and Eve, which he finds scientifically implausible (pp. 143–44). Adam was not the “cause” of our original sin; rather, we all have fallen natures/wills, and therefore our unique hypostases are always sinful. We need not look for a cause somewhere back in Eden because fallenness is a brute fact of our nature and is always enacted sinfully (excepting Christ). We are bound together with other human beings in original sin, and so God turns to all of us in grace. Interestingly, since original sin is now exclusively a function of soteriology, McFarland seems to lean toward universalism (see p. 168n64).

The last two themes that we might highlight appear in chapters 7 and 8. First, many criticize original sin because it makes personal responsibility meaningless; we can no longer distinguish victims and victimizers. Not so, McFarland says. Even though we sin necessarily, we do not all sin in the same way (our sinful hypostases are unique). Second, he addresses the concern that original sin leads to political or ethical quietism. Why stop abusing your spouse since everything you do is sinful? Again, not so. Because of original sin, we need God’s forgiveness, “and in knowing ourselves forgiven, we cannot help but seek to eradicate from our lives the sin that required such great mercy on God’s part” (p. 197). Affirming original sin engenders ethical activism! Many readers will appreciate these last two chapters even when disagreeing with some of the details.

The strength of this book is in showing the deep, abiding pastoral relevance of the doctrine of original sin. In our post-Darwinian age, many will be happy that he presents the doctrine in a way that does not fall afoul of modern science (cf. p. 169n67). And his use of Maximus’ Christology is especially creative, neatly resolving several theological tensions. But some of these strengths imply some fairly serious weaknesses. For instance, I do not think readers of this journal will be convinced by his denial of the historicity of the fall (and in my view, scientific concerns here are not decisive). Adam’s fall as a historical event has massive implications for the doctrine of original sin and Christian theology as a whole. And yes, McFarland is obviously right to relate original sin and God’s grace, but I suspect he overstates or misapplies the significance of soteriology—witness the troubling universalism implicit in his thesis. Finally, the distinction between sinfulness and fallenness made by many modern academics strikes me as problematic. Augustine, Maximus, and indeed the entire pre-nineteenth-century Christian tradition—none would have separated the two ideas, and for that reason it seems unlikely that the church faithful will adopt this conceptual shift anytime soon. No doubt these matters are all contested today, and I have great admiration for this book. But by the end I was left with the impression that McFarland was trying to have his Augustinian cake and eat it too.