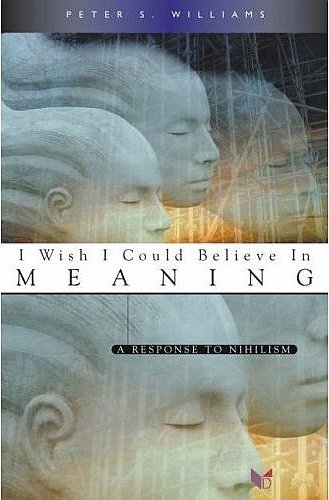 I WISH I COULD BELIEVE IN MEANING—A RESPONSE TO NIHILISM

Peter Williams’ book answers the heart-cry for meaning—a cry that is unanswered and not even allowed in the world of scientific atheism. It is easy to read, fantastically informative, in parts highly entertaining and jam-packed with quotable quotes and references to films, TV and most other aspects of the world with which anyone below 30 will be familiar. But don’t be deceived, this is a serious book!

Williams engages with mainstream philosophy, science and theology in order to make a cogent argument for believing in God and thereby in meaning. He very effectively takes on Richard Dawkins, the main protagonist for a naturalistic mentality, who builds an ultimately nihilistic approach to life based on the non-existence of God. Over against naturalism, Williams constructs a reasoned theism based not simply on the argument from design (which is the focus of the penultimate and perhaps slightly tangential chapter), but on beauty.

In doing so he draws on a rich and long history of theology, long-neglected, though always present, in the west. Along the way he introduces the reader to major key concepts and terms in the vocabulary of ideas, gives a superb thumbnail picture of Thomas Aquinas, alludes pointedly to Miss Piggy and debunks the media’s most idolised modern scientist and atheist. With considerable style, Williams demonstrates the extent to which naturalism is fatally flawed by what Scottish philosopher John Macmurray called ‘self-referential incoherence’. It doesn’t make sense in its own terms. Revel in the swift exposé of Dawkins’ ill-conceived and self-destructive position on, for instance, pages 82ff.

The argument that Williams constructs is timely. Naturalism has recently received blows that seem to be fatal to its dominion in the west and particularly in western academia. (For an accessible account of ‘the rise and fall of disbelief in the modern world’ see Alistair McGrath’s 2004 book, The Twilight of Atheism.) The design argument has gained vigorous momentum from the success of the genome project. We have seen the turn-around from atheism of one of its most celebrated advocates, Anthony Flew, who has been profoundly affected by the Intelligent Design arguments (see the interview between Flew and Gary Habermas at http://www.biola.edu/antonyflew). Williams’ book has arrived during what may well be a paradigm shift within western philosophy and science.

Where Williams’ book scores is that it adds a formidable plank to the theistic argument by probing the way in which scientific atheism reduces all things to their physical properties. The reductionism might well ‘unweave the rainbow’ and eliminate anything transcendent from the world, but it cannot get rid of the rainbow’s beauty, a beauty which serves absolutely no purpose that the science can account for. What do you do with the bits of the universe that are left over when you’ve tried to reduce everything to the subject-matter of physics? Why can’t we get rid of the transcendent bits of life? Do they not in fact point to something beyond the material? The answer, as chapters 7 and 8 argue, is ‘Yes’. The conclusion is that we can both raise and answer that heart-cry. We can have hope: we do have meaning because there is God.

I quoted from the book recently at a Leavers’ Service for the sixth form, their parents and the teachers at a local secondary school. It went down a bomb! But this book to give to any thinking non-Christian who has been awakened to the indestructible questions of meaning and purpose. (In fact, Williams wrote it for just such a person.) Also but it so that you can be better prepared ‘to give a reason for the hope that is in you’—as we are instructed to be in 1 Peter 3:15. It is a model of contemporary apologetics and will inspire and equip you for the apologetic task. Buy the book if you are wont to quote—it’s a treasure trove. And whatever else you do, go to www.damaris.org