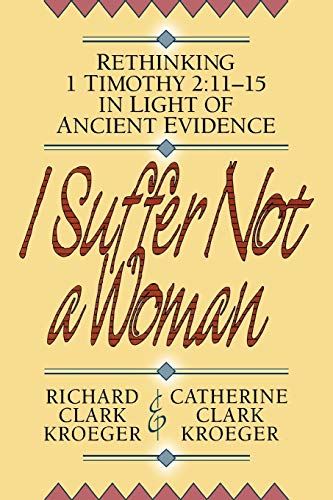 I Suffer Not a Woman: Rethinking 1 Timoty 2:11–15 in Light of Ancient Evidence

The discussion of 1 Timothy 2:11–15 in relationship to the place of women in ministry continues unabated. Richard Kroeger (a retired pastor) and Catherine Kroeger (founder and President of Christians for Biblical Equality) have produced a fascinating and important contribution to that discussion. Their book is a welcome and strong defence of the ‘egalitarian’ position that is committed to both men and women sharing the full range of Christian ministry. The book, summing up and going beyond previous articles the Kroegers have published, is a major attempt to show that 1 Timothy 2:11–15, properly understood, is not a scriptural warrant for any prohibition of women in the true ministry of the Gospel.

The book is divided into three parts. Part I, ‘Approaching the Text in Its Context’, is a helpful introduction to exegetical and hermeneutical method, aimed at the conservative evangelical reader, as well as an introduction to the Pastoral Epistles and the situation and occasion of 1 Timothy in particular. This part, in essence, gives an overview of the entire argument of the book. Authorship of the Pastoral Epistles is given to Paul and at least one other (anonymous) person, suggesting that these letters were completed in the first century, but after Paul’s death. It is argued, correctly I believe, that the purpose of the Pastorals was to oppose heresy, not to establish ecclesiastical norms of governance. It is further argued that 1 Timothy is directed against a gnostic or proto-gnostic heresy that gave to women an inordinate and inappropriate place in religious leadership. This is set in tire context of understanding Ephesus ‘… as a bastion of feminine supremacy in religion’ (p. 54), primarily related to the Ephesian Artemis (Diana) cult.

Part II, ‘The Prohibition (1 Tim. 2:12)’, features a lengthy study of the relatively rare Greek verb authentein. The Kroegers conclude that the fundamental meaning of the term relates to the concept of origination, authorship or source of something. Thus, they would render 1 Timothy 2:12–13 as follows: ‘I do not permit a woman to teach nor to represent herself as originator of man but she is to be in conformity [with the Scriptures].… For Adam was created first, then Eve’ (p. 103). This is understood, then, in the cultural-religious pagan and gnostic contexts of the feminine as originator, against which 1 Timothy argues from the Jewish tradition represented in Genesis.

Part III, ‘The Prohibition’s Rationale (1 Tim. 2:13–15)’, argues that 1 Timothy 2:13–14 is a refutation of the heresy that presented women, and especially Eve in this gnostic or proto-gnostic context, as the originators. 1 Timothy 2:15 is understood as an affirmation of childbearing over against gnostic denials of procreation.

The Kroegers have argued with thoroughness and widespread documentation a consistent and important interpretation of 1 Timothy 2:11–15. They have done this primarily for and with sensitivity to a conservative evangelical audience. Their study also, although dealing with many complex and difficult issues, is presented in a readable, popular style (with many of the technicalities reserved for the appendices). I warmly commend their book for careful study and strongly support their conclusion that 1 Timothy 2:11–15 is not a prohibition of women’s participation in any way in the ministry of the true gospel. The Kroegers are to be heartily commended for their hermeneutical sensitivities and their use of the data of the cultural-religious environments for the interpretation of the NT. I affirm strongly the fundamental position that the Pauline text is an argument against abuse within the church that arises from and is nourished by the heretical teachings which the Pastoral Epistles oppose. They are clearly, in my judgment, correct in understanding 1 Timothy 2:15 as a statement against the heretics and as an affirmation of the legitimacy and appropriateness of childbearing for women within the church in the first-century cultural setting.

There are questions, of course, that can be raised concerning such a wide-ranging and thorough study of a relatively brief text. There is a lack of sufficient engagement with the work of other scholars who have also addressed this text and its issues. For example, the discussion of Dennis R. MacDonald, The Legend and the Apostle, receives only one brief mention. The landmark 1988 study (in New Testament Studies) of Leland Wilshire on authentein is not used at all in the long discussion of that verb.

The construction of the nature of the heresy in Ephesus against which 1–2 Timothy are written is worthy of study and reflection, but it is not convincing. The evidence amassed comes from such a variety of sources, places and times that it is doubtful that the constructs of pagan cults focused on women or that the gnostic/proto-gnostic teachings can be accepted as clearly established patterns of religion in late first-century Ephesus.

I have written in support of the view that the prohibition in 1 Timothy 2:11–15 is directed against women deceived by the heresy opposed in 1–2 Timothy (see especially 1 Tim. 4:3; 5:11–16; 2 Tim. 3:1–9). However, the evidence for identifying the heresy opposed in 1–2 Timothy with the construct of the Kroegers is not actually very clear. It may be presumptive to argue that 1 Timothy 2:13–14 is a refutation against an exalted gnostic/proto-gnostic view of Eve. Other alter natives are not sufficiently considered in the book. Further, although the discussion of authentein is fascinating, the evidence presented by Wilshire that the verb refers to violent action is much more convincing.

In summary, the Kroegers have produced an important contribution to the ongoing study of a difficult text. Their affirmation of the ministry of women is important, and they have shown that it is possible to interpret responsibly 1 Timothy 2:11–15 as other than a prohibition against women’s participation in ministry. All of their data and arguments are intriguing and worthy of consideration; some of the pivotal points of their own construction of the occasion and context and the Pauline response are to be questioned.