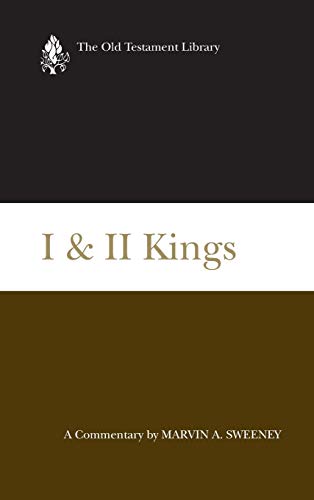 In the latest volume of the Old Testament Library series, Marvin Sweeney, who is undoubtedly one of the leading scholars in prophetic literature today, has written a concise and lucid commentary on Kings that reflects his impressive historical and literary erudition. Though written with the classical historical-critical view in mind, it is innovative and offers insights that will be the subject of scholarly discussion for years to come. Sweeney attempts to bridge the gap between ‘those who defend the Bible’s truth claims … and look for evidence to confirm the veracity of its historical presentation’ and ‘those who question the Bible’s truth claims’ and dwell on the challenges that archaeology, ANE literature, and the Bible itself ostensibly present to discount Kings as a historical source, by presenting a ‘middle way’ (p. 4).

I and II Kings: A Commentary begins with a lengthy, but helpful, introduction that discusses preliminary matters found in most commentaries, such as historicity, literary structure, theology, and textual versions, but the majority of this space is devoted to his understanding of the compositional history for Kings. A cursory reading of the introduction might lead one to summarily categorise Sweeney with the consensus historical-critical view regarding composition and literary structure; however, his understanding of the composition of Kings has distinctive elements that are intriguing, and he diverges from the commonly held view of a tripartite structure of the book. Sweeney advocates a multistage composition of Kings with several editions of the Deuteronomistic History (DtrH), which ultimately results in a final exilic edition in the mid-sixth century B.C.E. The final form of Kings is a highly theological account of the history of the fall of the Davidic monarchy, but underlying the final form are several layers of previous editions that have been incorporated into the final exilic form. Previous editions of the DtrH include the Josianic edition from the late seventh century B.C.E., which presents Josiah as the ideal monarch of the Davidic line. Sweeney points to literary tensions in the final form, which, he argues, are the result of redactional activity of a Josianic edition into the exilic edition (pp. 438–42). For those familiar with Sweeney’s scholarship, the prominence of Josiah in Sweeney’s understanding of the composition of Kings, and for that matter the Hebrew Bible in general, should not be surprising. Much of his views can be traced to his earlier work, King Josiah of Judah: The Lost Messiah of Israel (Oxford University Press, 2001), and to a lesser degree, his recent commentary on Zephaniah (Fortress, 2003), where he argues that Zephaniah is a work during the reign of Josiah. Another edition, according to Sweeney, is the Hezekian edition, which is the basis for the Josianic edition. For him, the abrupt interruption of Hezekiah’s reforms by the Assyrian invasion, placement of Hezekiah’s regnal account immediately following Hoshea’s regnal account, and formulaic patterns in the regnal accounts are evidence of a Hezekian edition. Sweeney’s multistage composition takes him beyond a Hezekian edition to an even earlier stage: the Jehu Dynastic History, produced in the first half of the eighth century and found in 1 Kgs 12–2 Kgs 14 (with the exception of 1 Kgs 13). This is a modified approach to Campell and O’Brien’s Prophetic Record proposal and has implications for the Davidic history in 1 Sam 1–1 Kgs 10. The earliest edition of Kings, according to Sweeney, is the Solomonic History that culminates in 1 Kgs 3–10 and commences in 1 Sam 1 (minus 2 Sam 10–12; 21–24), and dates to the mid-tenth century, a hypothesis at which most historical critics will undoubtedly cringe. Sweeney bases his argument on the positivistic presentation of Solomon’s reign as an unprecedented period of peace, prosperity, power, and stability, and the demise of the house of Saul in 2 Sam 9–20, which is crucial for the rise of David, as a clear indicator of pro-Davidic/Solomonic interest. Consequently, his commentary on 1 Kgs 3–10 is particularly interesting.

With regard to the overall structure of Kings, Sweeney prefers a sequence of thirty-eight ‘regnal accounts’ that evaluate the reigns of the kings (1 Kgs 14:21 to 2 Kgs 25:30), over the majority view, which views 1-2 Kgs in a tripartite structure (1 Kgs 1–11, the ‘united kingdoms’; 1 Kgs 12–2 Kgs 17, the ‘divided kingdoms’; and 2 Kgs 18–25, the ‘remaining kingdoms’). The OTL series format allows for comment on chapter-length units, which Sweeney uses to provide helpful overviews and literary perspectives, as well as smaller units, where he demonstrates his mastery of linguistic, archaeological, and historical details.

In short, I and II Kings: A Commentary is a wonderfully balanced commentary, in terms of its accessibility and excellent scholarship and its ‘middle way’ approach to critical matters. That Sweeney maintains a high view of the text and considers Kings to be a historically verifiable account of the past is also refreshing. This volume promises to be a standard commentary and is a ‘must-have’ for scholars, students, and pastors alike, who wish to further engage with Kings.