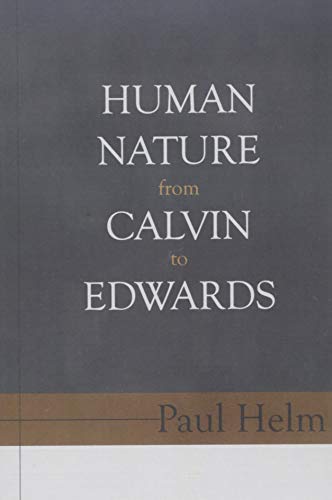 Human Nature from Calvin to Edwards

In Human Nature from Calvin to Edwards, Helm examines the neglected topic of the Reformed perspective on human nature in and of itself (not the well-researched topic of human nature as created, fallen, redeemed, and glorified) by detailing perspectives of the soul according to representative theologians between 1550 and 1750. Though their views were diverse, all of these theologians used faculty psychology to make sense of human beings. Helm does not attempt to provide an apologetic for this framework but does claim that their understanding of the whole person—including concepts like consciousness and conscience—went beyond a one-dimensional perspective of a purely physical existence.

Chapters one and two explain the roots of faculty psychology as found in Augustine and Aquinas, and Reformed anthropology as found in Calvin and Vermigli. Augustine, influenced by Plato, believed that memory influenced understanding and emotions were actions of the will. He prioritized the will over the other faculties, defining it as unfree or turned around because of sin yet still being the power by which one chooses. Aquinas, influenced by Aristotle, prioritized the mind, arguing that if sound reason dictated the passions, it would lead to virtuous behavior. Later theologians were deeply influenced by these two figures. Though Calvin was suspicious of philosophical approaches to the soul, worrying that they underplayed sin, he still believed that reason was active after the fall despite its limitations to receive divine truth. On the other hand, Vermigli willingly used Aquinas’s approach and promoted the compatibilist view of actions as originally caused by outside forces, though people were responsible for their unforced choices.

Chapter three outlines the Reformed orthodox view of the body and soul in general. Many used hylomorphism—the Aristotelian view that “the soul is the form of certain matter” (p. 12)—and taught that the soul and body are connected (though some like Purnell were more dualistic than others like Flavel), the soul animates the body, and the soul is simple, immaterial, and immortal.

Chapters four–six directly address the faculties. Though some of the Reformed orthodox were voluntarists, most were intellectualists who aligned with Aquinas in believing that the intellect is the superior faculty that directs the will in its action. In fact, many of the orthodox believed that the subordination of the will to the intellect was a metaphysical necessity, saying the intellect provided vision to the blind will. Often, debates regarding the freedom of the will led to connections between freedom and being in a state of grace. There were also various views and definitions of moral ability and inability, such as Owen’s emphasis on the loss of intellectual ability in the fall versus Truman’s on the loss of willingness. The affections were sometimes referred to as a third faculty and other times as an aspect of the will, but either way they were not to be discarded to achieve rationality. Rather, affections were meant to be used in godly ways as directed by reason to achieve virtue.

Chapter seven addresses issues and debates related to the interplay of the faculties. For example, various perspectives on the interconnectedness of the faculties’ powers affected in-group debates about faith and assurance. Further, the Reformed orthodox debated with outside groups about issues related to the faculties, such as their disagreement with the Arminian tendency to lessen the negative effects of the fall on the functioning of the will. Lastly, chapter eight addresses Edwards, showing he argued that the soul of a person not the faculty of the will had the power to choose, and he disagreed with the Reformed orthodox view that affections come from the will and are guided by reason when he stated that sensations move the will to act.

In sum, Helm’s book contributes to scholarship on the Reformed view of human nature, makes antiquated and complicated ideas easier to understand, and presents the Reformed tradition in a nuanced way. The reader will quickly see that the concepts Helm interacts with are steeped in old debates and thus difficult to understand today, but Helm’s use of clear and straight-forward language makes them accessible. Further, Helm’s previous work Calvin and the Calvinists, which debunked stereotypes about Calvinism, shines through in his statements related to the Reformed orthodox use of Aristotle (which arise quite frequently in this book), as well as each figure’s uniqueness and connectedness to other figures. Helm does not describe each figure’s perspective of a certain concept in a vacuum but refers to relevant historical and literary information. This is important because many figures used faculty psychology as a method but did not write an anthropology that outlined their method in a systematic way, which means one quote must often be understood in light of other information.

Unfortunately, since several chapters deal with a vast array of figures and topics, it becomes very difficult to synthesize information in order to create a coherent idea of what the Reformed orthodox believed about human nature. This is partly unavoidable given the natural diversity of views even within one theological camp, but perhaps this work could have been helped by adding visual aids like charts or a list of definitions to enable the reader to categorize the many technical terms they will encounter in the context of different figures and debates.