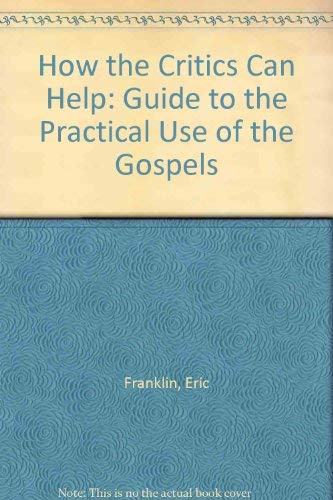 How the Critics Can Help: A Guide to the Practical Use of the Gospels

When I was at theological college and beginning to wrestle with some of the many problems of theology, there was one problem which seemed to vex my contemporaries and myself more than any other. This was the question of how to relate our historically-oriented study of the Bible—the synoptic problem, criteria for the authenticity of Jesus’ sayings, the origins and date of composition of Deuteronomy, etc., etc.—to our use of the Bible in personal devotion and preaching. The constant assurances that our study was helpful did not instantly chime in with our experience. And certain eminent scholars, who were brought in to preach to us with the specific brief of relating academic discovery to homiletic exposition, to a man only provided confirmation for one’s worst fears that the two tasks were basically unrelated. And there was little literature available to help one out of the impasse.

Happily the situation has begun to change in recent years with a growing number of scholars addressing themselves to precisely the question of how to relate modern criticism to the practical and religious use of the Bible. Both the books under consideration here fall into this category. And the inherent importance of the subject as well as the undoubted quality of both books demands our attention.

Franklin offers a lively and lucid exposition of what may be called a ‘critically orthodox’ approach to the gospels. Those who find it difficult simply to understand the nature and purpose of such things as form criticism or redaction criticism will find them clearly and helpfully explained, with also a realization of their limitations and the way in which they can be abused. In general Franklin argues (with considerable zeal) for the thoroughgoing application of historical criticism to the gospels and for coming to terms with the painful fact that the gospels do not contain the sort of clearly historical material which one might have hoped for and expected. One might summarize his position by saying that it is ‘faith not facts’ which the gospels contain. That is, it is essentially the early church’s faith in Jesus to which they bear witness, rather than the historical facts of Jesus as such, which are no longer recoverable. The whole book is written in a vigorous way with the aim of gaining converts to proper critical study of the gospels. Despite many illuminating insights, however, I am unsure how far the book will fulfil its author’s hopes.

First, Franklin is too narrowly historical in approach. He argues that it is only through historical analysis that one can truly understand the gospels. But while historical analysis is right and proper for those interested in such matters, I remain unpersuaded that it is really necessary to foist it upon those who are not interested (despite accusations of docetism, etc.). Franklin makes little reference to the contemporary interest in a more truly literary approach to the gospels; and he dismisses it far too easily on the grounds that it sits too light to the historical nature of the gospels. Consistently with this, although Franklin rightly stresses that the gospels originated and must be understood within the context of the life and beliefs of the early church, he never grapples with the significance of the fact (which he merely notes once or twice en passant) that the evangelists almost never draw attention to their context, but rather direct the reader’s attention entirely to the story of Jesus and his context. Are we reading the evangelists aright if we constantly draw attention to considerations which they sought to exclude? Such important literary issues need much more extended and careful discussion than they receive.

Secondly, Franklin’s basic theological stance is open to question. On the one hand, despite his insistence upon diversity within the New Testament, he tends to impose his own concept of faith upon the material. For Franklin faith involves uncertainty and insecurity and he makes much of the hiddenness of God. So not only does he argue that this was the sort of faith Jesus had as he went to the cross (despite abundant gospel material to the contrary), but also it is the sort of faith that the Christian today should have—given the historical uncertainties surrounding the gospels. But since the predominant witness of the New Testament is to the revealing of God with a stress on knowing him and having confidence in him, Franklin’s stance is, prima facie, somewhat odd. At the very least there is insufficient allowance for the varieties of ways in which God works, sometimes open and sometimes hidden.

On the other hand, although Franklin attempts to justify his view of faith by appealing to a theology of the cross, and argues that modern criticism truly points us to such a theology of the cross, it is simply not the case that the New Testament presents a theology of the cross in the sort of terms that Franklin uses. One is left with the feeling that Franklin’s theology is rather more imposed upon the text than derived from it. And this raises doubts about Franklin’s whole presentation of his case. For the real problem is not so much the existence of the historical problems to which he points, but rather what one is to make of them, for which one’s basic theological presuppositions are of fundamental importance.

Wainwright’s book attempts to break new ground. Wainwright is concerned to move beyond the historical presuppositions of so much scholarly work. He does not deny the legitimacy of such work, but simply doubts its value for the ordinary reader. Rather Wainwright stresses the intrinsic power and authority of much of the Scriptures, especially the gospel presentation of Jesus, and wishes to help the modern reader to hear and respond to this. Such a programme is most appealing.

How then does one avoid the familiar problems of authority and interpretation which arise from the various and diverse materials within Scripture? Wainwright’s solution is simple. He makes Jesus—Jesus as presented in the New Testament, not a modern ‘reconstructed’ Jesus—the norm and authority for the believer. Insofar as Old and New Testaments are in accord with the biblical Jesus then they have authority for the believer; both Old and New Testament must be read in the light of Christ and be judged by his standard. This, in essence, is Wainwright’s Christocentric approach to the Bible.

Much that Wainwright says is valuable. Nonetheless his approach raises a number of difficulties which he does not deal with satisfactorily. First, there is the problem that there are so many issues on which the biblical Jesus is silent. All too often Wainwright has to argue that something is, or is not, ‘consistent with Jesus’ attitude’, without realizing what a potentially slippery and subjective criterion this can be. Despite Wainwright’s insistence that the criterion of the biblical Jesus prevents one from interpreting Scripture according to one’s preconceptions, Wainwright’s practical examples sometimes left me wondering whether the ‘biblical Jesus’ might not yet be a sophisticated rationalization of such preconceptions.

Secondly, one may ask whether Wainwright’s ‘biblical Jesus’ is sufficiently biblical. In particular, those many elements of warning and judgment which feature in the gospel presentations of the words and deeds of Jesus receive scant recognition. Again one is left feeling that other, hidden, interpretative factors are at work.

Thirdly (in illustration of the above two points), there are times when the morality of divine actions in the Old Testament is far too quickly and easily dismissed as incompatible with the standards of love and justice seen in Jesus. As someone impressed by John Wenham’s The Goodness of God, I found certain of Wainwright’s arguments quite unsatisfactory. The whole issue is far too complex and difficult to be resolved as simply as Wainwright proposes. The criterion of ‘the biblical Jesus’ will need considerably more refinement if it is truly to help resolve difficulties.

Having said all this, it must be said in conclusion that the above criticisms have the defect that they do not convey the lively, readable, stimulating and suggestive qualities that both books have. It may be that the books do not have all the answers. But all who are interested in the debate about the use of the Bible will find much that is worth while in them and which will need to be taken into account in future discussions of the subject.