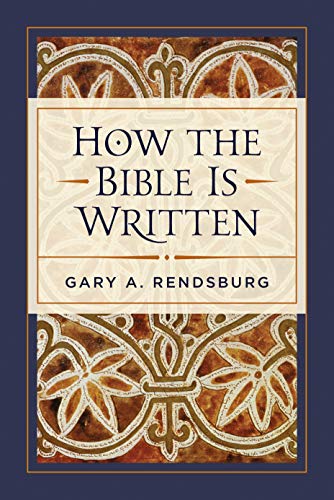 How the Bible Is Written

Reading Robert Alter’s The Art of Biblical Narrative (New York: Basic, 1991) changed the way I read Old Testament stories. Greater appreciation for God’s Word could be had by reading through a literary lens. Gary Rendsburg’s magnum opus has had a similar effect on me, but on a “micro-stylistic” level. His underlying belief is that the ancient Israelite audience had a sophisticated understanding of literature. I say “audience” because Rendsburg holds that the biblical text was primarily heard rather than read silently. He envisions the situation thus: “Gathered around the campfire … or at the piazza … one can imagine groups enjoying the recital of texts, as part of their national heritage, indeed, as entertainment—with all religious overtones and implications set aside for the moment” (p. 27). I mention these two factors at the outset—an informed audience and oral-aural communication—because Rendsburg then proceeds to detail some finely nuanced literary techniques in the Hebrew text, many of which are unfortunately lost to readers of the English Bible.

Eight of the twenty-nine chapters have published elsewhere, but they have been incorporated seamlessly. Alliteration is one of two key stylistic features, with six chapters devoted to it (in the books of Genesis, Exodus, and Micah; in prose narratives; in legal-cultic material; in poetic and prophetic texts). Diverging from general understanding in English, Rendsburg uses “alliteration” for the occurrence of the same or similar consonants (pp. 77–78), and uses “assonance” for the same or similar vowels. One well-recognized example is found in Ruth 2:10, לְהַכִּירֵנִי וְאָּנֹכִי נָכְרִיָּה. The consonants of the root of the first word (n-k-r; Hiphil infinitive) can be heard in the subsequent two words (n-k and n-k-r, respectively) “with supreme auditory effect” (p. 208). Rendsburg also demonstrates that alliteration was heard not just in adjacent words, but also in words separated by a number of verses. He argues, convincingly in my opinion, that alliteration not only adds to the pleasure of reading the Hebrew text, but can also explain hapax legomena and individual word choice.

Repetition with variation is the second key stylistic feature (also featured in six chapters, with examples from a similar range of texts as for alliteration). For instance, in the Plagues Narrative (Exod 7–10), the repeated warnings to Pharaoh could have been phrased in exactly the same way, but the biblical author has deliberately varied them slightly (pp. 42–47). When it comes to describing Pharaoh’s responses, however, some of these are repeated verbatim. Why? Rendsburg suggests that this deviation from repetition with variation is an instance of “form following content” (v. 49). The language does not change because Pharaoh remains stubborn.

Other chapters include topics such as confused language, marking closure, wordplay, the use of וְהִנֵּה (“and behold”), shorter before longer, Israelian Hebrew, style-switching, addressee-switching, form follows content, other oddities, and a final chapter that applies some of the described literary features to Genesis 29. Since I’m conservative when it comes to text-critical issues, I found the chapter on confused language especially helpful because it provides a convincing alternative to amending the MT when faced with difficulties in the Hebrew. One example is Joshua 2:4. Instead of amending וַתִּצְפְּנוֹ (“and she hid him”) to a plural, the singular can be read as Rahab hurriedly hiding just one of the two spies (and the other following or finding his own hiding place; pp. 141–43). The atypical form of the word (the regular form is וַתִּצְפְּנֵהוּ) can similarly be read as “confused language” employed by the biblical author to reflect the excitement of the scene.

Two chapters depart from how the Bible was written to when it was written. In the first of these Rendsburg argues that Torah was composed in the tenth century BC, based on connections he identifies between the book of Genesis and Jerusalem under the reigns of David and Solomon (ch. 21, pp. 443–67). In the second chapter, Rendsburg challenges the Documentary Hypothesis by arguing that the Torah has a literary unity (ch. 22, pp. 468–90). He does this by demonstrating how a literary reading of five texts (Gen 6–8; 12–22; 25–35; Exod 7–12; 32:12–15) reveals that they are literary wholes, as opposed to texts composed of small component parts. Not all Themelios readers will agree with Rendsburg’s conclusions on the dating of the Torah, but his arguments are cogent and worthy of consideration. Many readers will appreciate his challenge to the Documentary Hypothesis.

This book accomplishes what it sets out to do: “to reveal the manner in which language is used to produce exquisite literature” (p. 1). Rendsburg expertly describes the how, but on the whole, eschews further interpretation or discussion of implications based on his close literary readings. Yet I wondered: does appreciation of the literary features of a given text also help us to understand its intended meaning? For example, is alliteration only for enjoyment, or also for emphasis or to draw connections between words in separate verses? To repeat: this further analysis is beyond the stated aim of the book. But for those of us who read the biblical text for more than just enjoyment, these types of questions will arise. So perhaps we can view this book as providing the necessary tools to help us read and appreciate Bible texts from a close literary perspective, and then we need to perform the next step of drawing out the implications of our enriched readings.

Those who can read Hebrew will most appreciate this book, but transliteration throughout means that laypeople can also follow along easily. Rendsburg writes in a clear and accessible style, and his use of examples from Medieval and Modern English literature adds to the enjoyment of reading this book. I highly recommend this book for all—from laypeople to Bible students to scholars.