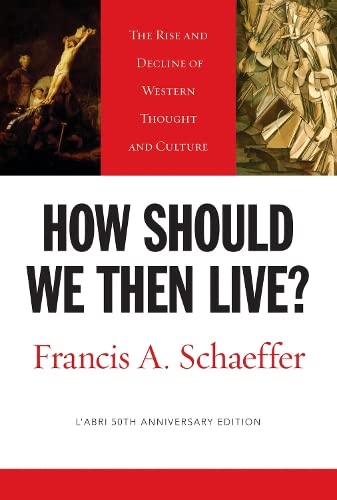 How Should We Then Live? The Rise and Decline of Western Thought and Culture

Written by Francis A. Schaeffer Reviewed By William Dyrness
Mission and Culture

This is, by my count, Dr Schaeffer’s twentieth book, and along with the film series made to go with it, is clearly intended to be a summation of all his efforts in the history of culture. Beginning with Rome, he attempts an ‘analysis of the key moments in history which have formed our present culture’. The line of reasoning will be familiar to readers of his previous books, but the impact of this book is unique.

The flow of history, Schaeffer believes, is determined by the world-view people hold. Roman gods were only amplified humanity so their value system was not strong enough to bear the strains of life. Christian values provided the structure for medieval civilization but alien features—pagan learning and humanistic elements—were also present. In the end humanism won out. By the mid-fifteenth century (just after Masaccio), Schaeffer asserts, the die was cast: nature was no longer seen in its relation to God and man considered himself increasingly self-sufficient. Michelangelo’s statue ‘David’ shows renaissance man as he wished to become: the slayer of tyrants.

Parallel to this rebirth in the south, the Reformation was giving an opposite answer in the north: man could not begin with himself, he must start with the Bible. There man could find ‘true things about God’ and ‘many true things about nature’. It is Schaeffer’s thesis that this base led to a broad Christian consensus which produced the finest fruits of western civilization: the art of Rembrandt and Bach, the political freedoms consequent to the English and American Revolutions, and the rise of modern science. Concerning the latter, Schaeffer notes, while there were other (Greek and Arabic) influences, the Christian factor ‘made the difference’. Of course not all the creative minds were Christians, but they were operating within a general Christian framework which made their work possible.

On the other hand, the breakdown of this Christian consensus has brought western culture to its present crisis. Schaeffer sees the seeds of this decline—sown in the Renaissance—sprouting in the eighteenth century Enlightenment, first in science then in philosophy. The one led to a closed system of cause and effect in which man himself came to be seen as part of the world machine; the other started with Rousseau’s autonomous man (as interpreted by Kant and Kierkegaard) and led modern man to seek ‘meaning’ in the area of non-reason. This division between the scientific/pessimistic/reason and the mystical/ optimistic/non-reason Schaeffer claims is the basis of modern man’s existential methodology. This split works itself out in art, theology, and society in general.

With a sure hand Schaeffer traces this final step: the communication via the media of this ‘monolithic consensus’ of the fragmented concept of the universe and life. This stage Schaeffer believes to be most alarming for it leads to what he calls ‘sociological’ laws, science, and news: taking a stand, drawing a picture, not on the basis of truth but in view of the intended results in society.

But who now will determine which results to aim for? Here is the rub. Schaeffer’s answer is given in the light of economic, political ecological pressures and modern man’s desire for personal peace and affluence. All the signs, he warns, are pointing in the direction of totalitarian rule, either by one man or an elite of savants. Significantly for one living under a martial-law regime, this is the primary thrust of Schaeffer’s conclusion: Will Christians resist such authoritarian government whatever its label or origin, even if their own ‘religious activities, evangelism and lifestyles, are not disturbed’? The question cannot be evaded, for ‘no true authoritarian government can tolerate those who have a real absolute by which to judge its arbitrary absolutes, and who speak out and act upon that absolute’. Hard words, but true.

This is surely Schaeffer’s strongest statement and this is what he does best: probing prophetically the weaknesses in the church and the dangers of modern culture. Will the Christian stand up for what he confesses to believe? Will we confess our racism, our thoughtless accumulation of wealth and our desire for personal peace?

We can be grateful for this warning and still recognize the weakness of Schaeffer as a cultural historian. One can agree in general with his conclusions without overlooking his sometimes arbitrary (I am tempted to say cognitive) approach to culture. What help is there in lists of founders of modern science or of medieval artistic achievements? (The study guide especially reflects this weakness with its endless names, dates and facts.) Must we insist on pinpointing ‘the shift’ to modern times just after Masaccio? Must we see opposite answers, rather than interplay, in the Renaissance and Reformation? Must we insist that the effect on art of the Reformation was mainly positive (what about Zwingli and the Anabaptists?), or the effect of the media today only negative? Perhaps, if history has a flow as Schaeffer believes, one cannot be satisfied to search out ‘antitheses’ or reject ‘syntheses’ at every point.

But we would be ungrateful to leave it here. I am one of thousands who has learned much from Schaeffer both from his books and his Swiss community, L’Abri. Schaeffer’s work has been for many of us a bridge to a broader application of our faith to culture. This book too will contribute much to such a broadened point of view. At the same time perhaps now we honour him best by going beyond him. Writing from Asia, I think of two major areas in which Schaeffer’s approach calls for supplement. First we must broaden our whole discussion of culture to include the perspective of the social sciences. As the middle ages was feudalism as well as scholasticism, so today underdevelopment and urban migration, to take two examples, are as important for the Christian perspective as the media and avant-garde art. Secondly, it follows from this that evangelical thinking about culture should begin to include reflection on non-western traditions. In the orient we might learn to temper Schaeffer’s individualistic view of freedom with a collective, corporate element that would put our discussion, say, of socialism (or even Chinese communism) in a whole new light. But that we are ready to move in new directions may itself be a tribute to Schaeffer’s achievement. Our debt to him in any case is even clearer with this latest book.

Towards a biblical view of universalism

‘Shall you not surely die?’

by Edwin A. Blum
VIEW ALL VIEW ALL

A History of Early Christian Doctrine before the Council of Nicaea

Marx and the Bible

Reviewed by Martin Goldsmith
Philosophy
VIEW ALL VIEW ALL