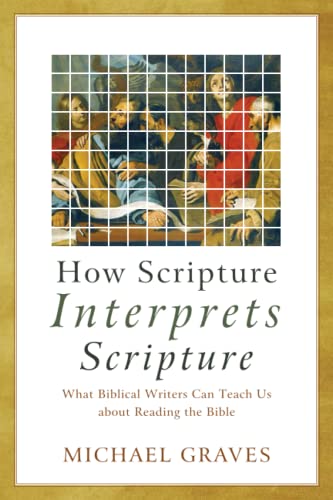 How Scripture Interprets Scripture: What Biblical Writers Can Teach Us about Reading the Bible

Interpreting the Bible is no straightforward task. Interpretation mostly happens unselfconsciously in personal and liturgical reading, but as the continuing hermeneutical conversation suggests, the church is still trying to articulate what how the Bible should best be interpreted.

Michael Graves seeks to shed light on biblical interpretation by examining how the Bible interprets itself. In his words, he sets out to “illustrate and explain what we can learn about biblical interpretation by paying attention to how Scripture interprets Scripture” (p. 1). In one sense, Graves follows previous work done in the more historical vein of biblical scholarship, such as Michael Fishbane’s study of “inner-Biblical interpretation” (Biblical Interpretation in Ancient Israel [Oxford: Oxford University Press, 1985]), which set out how biblical authors interpreted earlier biblical texts. In another sense, Graves seeks to go a step further. To borrow a phrase from Kevin Vanhoozer, he apprentices himself to Scripture by observing the biblical authors and then extending their interpretive practice into his own constructive theological reading.

Each chapter seeks to make sense of a particular issue as it develops across the canon: corporate and individual responsibility; insiders and outsiders; marriage, polygamy, and divorce; sacrificial offerings; and the afterlife. The issues are well-chosen—this is a strength of the book. They are significant topics in the New and Old Testaments, they exhibit a variety of biblical voices, and there is interpretative controversy surrounding each. I found the discussions about marriage and the afterlife especially stimulating. In each chapter, Graves makes a series of interpretive moves. First, he summarizes key texts relating to the topic. Next, he looks in more detail at passages where biblical texts are picked up and reinterpreted by other biblical texts. Finally, in light of the exegetical work, he “pulls it all together” by setting out how the issue is best understood in a contemporary Christian frame of reference.

Another strength of the book is its attention to the biblical text, with a healthy mixture of brevity and depth. Graves maps the biblical landscape by traversing many of the relevant texts, but then homes in on the most significant texts for closer analysis. I also appreciated the way Graves seeks to understand the variety of biblical texts in a coherent way. Rather than simply harmonizing them, Graves locates the different passages in their historical and theological contexts and shows how once they are put into the different contexts they cohere with each other. As one example, in the chapter on marriage and divorce, Graves positions the permissive text of Deuteronomy 24:1–4 in the context of protecting women from existing divorce practices (pp. 91–92). He then understands Jesus’s teaching on divorce not as an overturning of Deuteronomy 24:1–4, but as an interpretation in light of the wider context of the purpose of marriage in Genesis 2 (pp. 104–6). Together, these texts teach that marriage should be for life, divorce should be avoided, and vulnerable women should be protected (p. 112).

I offer two points of critique. The first is that the book seems to be less about inner-biblical interpretation and more about thematic biblical-theological interpretation. By thematic biblical-theological interpretation, I mean that Graves mostly sets out different biblical texts on a topic, understands those texts in their original and salvation-historical contexts, and then constructively reads them together in light of the life and teaching of Jesus Christ. Of course, there is nothing wrong with this. It is simply that the title and the stated purpose are different from what the book mostly does. Graves does explore some cases of inner-biblical interpretation, and the final chapter draws together hermeneutical lessons from these cases. However, I wished that this chapter was far more developed, given the purpose of the book.

The second point of critique is that when Graves pulls things together, his conclusions sometimes leave problematic texts behind with insufficient argument. In his chapter on corporate and individual responsibility, he wrestles with corporate punishment texts such as Exodus 34:6–7. He briefly discusses transgenerational punishment in the killing of firstborn on Exodus 12, and only quickly suggests that this is a case of hyperbole for the purpose of teaching about justice (p. 42). Similarly, in his chapter on sacrifice, he asserts that texts that criticise sacrifice are cases of “rhetorical exaggeration,” and does no more to argue his point (e.g., pp. 128, 130). Given that one of Graves’s stated aims is to illustrate how various biblical texts can be understood coherently, the book would be stronger if he spent more time probing these texts or arguing his case on the basis of genre or literary theory.

Overall, Michael Graves has produced a stimulating book that explores thought-provoking topics from inner-biblical and biblical-theological interpretive perspectives. It both clarifies these controversial topics and contributes to the discussion of interpreting the Scriptures.