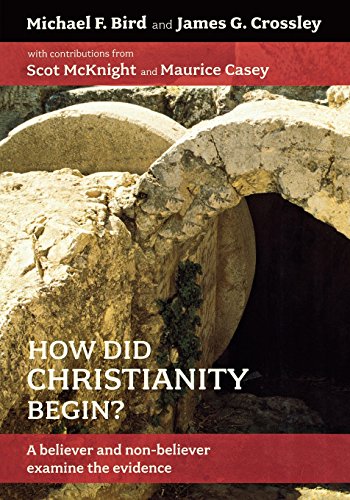 How Did Christianity Begin? A Believer and Non-believer Examine the Evidence

This interesting book sprang from internet dialogue between Michael Bird, lecturer in New Testament at the Highland Theological College in Dingwall, Scotland, and James Crossley, lecturer in New Testament at the University of Sheffield. The former writes out of his evangelical and confessional heritage; the latter writes, not as someone from a liberal branch of Christianity, but as a secularist committed to studying and explaining nascent Christianity without recourse at any point to the supernatural. To some extent, both enjoy being mavericks within their respective traditions—Bird believing, for instance, that he can reconcile traditional Reformed theology and substantive aspects of the new perspective on Paul, and Crossley arguing for an early-forties date for the composition of Mark, a position that would make most self-respecting secularists blanch.

After an introductory four pages in which Bird and Crossley give their respective explanations of their approaches and commitments, five chapters unfold, Crossley beginning the first. Within the chapter, Bird responds and Crossley offers a surrejoinder. In subsequent chapters the two scholars alternate as to which one primarily sets out a position, the other primarily responding, with the first author in each chapter providing the surrejoinder.

These five substantive chapters treat, respectively: (1) The historical Jesus. Crossley argues that there is nothing done or said by the historical Jesus, including his claims and his approach to the law, that was not unparalleled in Judaism, and that the origins of Christianity are perfectly explained by socio-historical factors. Bird responds by briefly affirming Jesus’ virginal conception, his miracles, his peculiar understanding and announcement of the kingdom, and his self-alignment with God—the latter stance openly taken up by his followers in worship. Crossley responds that Bird does not understand “socio-historical methodology” and dissents from some of Bird’s assertions. (2) The resurrection. Here Bird starts off the discussion, but the pattern of exchange is similar. (3) The apostle Paul. (4) The Gospels. (5) Earliest Christianity.

The sixth and final substantive chapter was written by Scot McKnight and Maurice Casey. McKnight, Karl A. Olsson Professor in Religious Studies at North Park University, responds to Crossley; Casey, Emeritus Professor of New Testament at the University of Nottingham, responds to Bird. One of McKnight’s charges is that Crossley devotes too much attention to the social dynamics of Jewish and Christian approaches to law and monotheism, and focuses too little attention on the kingdom, the centrality of Jesus, and “the incredible verbal display and concentration those early ecclesial communities had on the life, death and resurrection of Jesus, along with the gift of the Spirit.” Casey undermines the credibility of the sources and insists that Bird’s “evangelical convictions lead him to believe in the historicity of much secondary material in the canonical Gospels, to read early traditions in the light of later ones, and to view the Christ of evangelical faith as if he were the Jesus of history.”

A two-page seventh chapter, jointly written by Bird and Crossley, offer their joint “final reflections.” After almost two hundred pages of at least interesting debate, these two pages descend to the level of mush. Our two authors agree that they “disagree about a great deal,” that there are different ways of looking at the evidence, that the subject is complicated, that it would be good if we could see ourselves as others see us (complete with the necessary reference to Robert Burns), and jointly support the hope that neither the religious Church nor the secular State will control the other, while jointly affirming the virtue of religious freedom and “the intrinsic goodness of humanity.”

It is hard to figure out for whom the book was written or to whom I would recommend it. Those who have read even moderate amounts of New Testament and related introduction will learn nothing from this book: it is not pitched at them. I suppose undergraduates setting out to become aware of some of the disputes in the field might be given it, but in that case it would have to be supplemented by a cursory introduction to the history of the discipline, including nineteenth-century debates, the various quests of the historical Jesus, the gradations of belief/unbelief in contemporary scholarship, the historical pattern of creating Jesus-figures in our own likeness, and so forth. Treatments of various topics are not only brief, but the mode of approach adopted by Bird is rather different from that of Crossley. Bird is interested in ideas and coherence, but invests relatively little energy in wrestling with history; Crossley rather crossly charges that Bird’s approach is “odd and outdated,” and in some respects that is true. But Crossley’s implicit understanding of “faith” or “belief” does not wrestle with how the word is used in Paul. In any case, it is surely unlikely that anyone reading this book with any prior knowledge of the field would change his or her mind.

Moreover, what is perhaps most disappointing is that the discussion operates on such evidentialist principles that the insight the New Testament writers display regarding the moral dimensions of belief and unbelief are given virtually no thought. Jesus weeps over the city because it would not believe; Paul understands that he came to faith because of revelation; the same apostle insists that the “natural” person does not understand the things of God; several New Testament writers relate human blindness to massive idolatry. Such convictions do not mean that Paul (to go no further) is then unwilling to advance reasons and arguments: on the contrary, he sets out to persuade people, as both Acts and Paul’s own letters make clear. Nevertheless Paul recognizes that if people embrace the truth of the gospel, it is because God has opened their eyes, he has given them his Spirit, he has placarded the cross before them, he has convinced them they were dead in trespasses and sin. In other words, in a wild stretch of imagination I could imagine the apostle Paul entering the publishing lists with a first-century James Crossley, but it is impossible to imagine Paul jointly writing the last two pages with him, comfortably agreeing that opposing interpretations may be called up by the same phenomena, while jointly affirming the virtue of religious freedom and “the intrinsic goodness of humanity.”

D. A. Carson is emeritus professor of New Testament at Trinity Evangelical Divinity School in Deerfield, Illinois, and president of The Gospel Coalition.