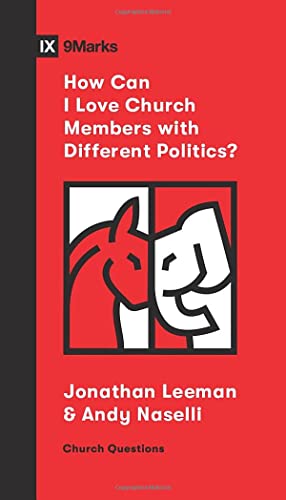 How Can I Love Church Members with Different Politics?

There is a detail hidden in the title of this short book that is key to its wisdom: it is a book about loving church members. It’s not a book about bringing civility back to politics, nor about how Christians should engage in political vocations, even less is it an argument for a set of political doctrines that Christians should embrace. At heart this book applies the theology of church membership associated with 9Marks to a specific threat to church unity. It isn’t a stretch to see it as an appendix to Mark Dever and Jamie Dunlop’s The Compelling Community (Wheaton, IL: Crossway, 2015). The focus is fellowship not political philosophy and this makes for a disarmingly simple and yet very helpful resource for churches.

There is a sense in which this framing of the problem of political disagreement is politically naive: the authors do not engage with questions about why contemporary political disagreement is particularly fraught, nor with the broader range of psychological and social forces that sort us into political tribes and make it hard to change our minds. We need thoughtful discussions of these questions, but what the authors have given us is more important. Political disagreement among fellow Christians is a problem that rests on foundations in theological anthropology: creation, fall, redemption, the human task of discernment, and believers’ obligation to maintain the unity of the Spirit. This theological ballast is often invisible—the bulk of the berg is below the waterline—but it means that anyone who is committed to those truths will find the logic compelling and the solutions not bound to one historical moment. A church member will feel the weight and find wisdom. That’s the book’s genius and limitation.

The bulk of the book is structured around six recommendations. The first two recommendations invite us to correctly frame the relationship between church members and note the implications for political disagreements. We need to adjust our expectation that church members will all think the same about political matters and that any disagreements in this arena fundamentally threaten our unity. Rather, God designed his churches to be “gatherings of his followers from every tribe and tongue and nation. Your church and ours are communities of former enemies learning to love one another. They are communities of political rivals working together” (pp. 27–28).

Recognizing “what a church is” requires us to see that our diversity—whether in ethnicity, gender, age, or even political affiliation—can bear witness to the reconciling power of the gospel.

There’s been nothing like the church in the history of the world. Every other nation has been united either by powerful men with swords or by family relations, including ancient Israel. Yet now a new nation exists, held together by neither sword nor family but only by Word and Spirit. (p. 28)

You show up at the church’s gathering on Sunday knowing your job is to beat those swords into plowshares. (p. 29)

As Christians enact love across boundaries—including those of political affiliation—the church gathering becomes a powerful witness to the peace that Christ has won for us. Love in the midst of this diversity is “gospel-revealing” (to borrow a phrase from Dever). So we lean into the challenge of loving those who might politically offend us because together with them we might become not merely witnesses to our theory of justice but to the Lord. This is the wonderful performance art of the church, the theater of divine glory, in which the manifold wisdom of God is being declared to the cosmos.

It’s possible to overplay the loving-across-diversity theme such that there are no matters on which Christians must share a common judgment. Consequently, the authors correctly maintain that loyalty to Christ and the faith that flows from hearing the gospel results in a definite core of Christian doctrine which must be maintained as the basis of church unity. This requires us to make a distinction between “whole church issues”—“the things that we as a church agree a Christian must believe or practice” (p. 30)—and those which belong to the domain of Christian freedom. The latter half of the book is devoted to the thorny business of helping us distinguish between which issues belong to which category. The primary tool for doing this is the distinction between “straight-line judgments [in which there] is a simple straight line between a theological or ethical principle found in the Bible and a political conviction” (p. 40) and “jagged line judgments” in which a biblical principle will require a number of extra-biblical supporting premises or judgments about states of affairs in the world before it yields a political conviction. There is a helpful discussion of how to keep “calibrating your conscience” (p. 48, emphasis original) in matters of Christian freedom and a stirring reminder to keep focused on what is most important: true justice will come when Jesus brings his kingdom to consummation, so keep making disciples.

It is saddening but self-evident that we need good pastoral wisdom in this area. Even in Australia where I write—which has one of the world’s most blessedly boring polities—divisions within churches over the legitimacy of COVID-19 vaccination requirements and extended social isolation rules have been disastrous. Churches and families have split. This has been especially the case in smaller rural communities which we already struggle to resource with gospel ministers. Pastors who are barely coping with the anxiety of shepherding their people through the change and uncertainty of the pandemic are broken by the vitriol from congregants who oppose a decision they’ve taken about how quickly (or not) to relax mask-wearing or resume in-person gatherings. I can only imagine and pray for those pastoring churches through the febrile heat of American politics.

We need to know how to love church members with different politics. We need to be theologically pastored through these strained relationships. We do, however, also need theological wisdom that moves us to action outside the relationships we have with each other in church. There is a world of difficult issues of justice that Christians must engage with as soon as they leave the church building. As much as the distinction between “straight-line” and “jagged-line” political judgments is true and necessary, it inevitably succumbs to the reality that every specific course of action in the political sphere involves some degree of jagged-line judgment. Therefore, one of the potential dangers of a book like this is that pastors may feel that having said something like this, they have said enough. That will not always be the case. Regardless, beginning with these foundations will be more fruitful than any amount of punditry about the fragmentation of mass media or some other bête noire of contemporary political polarization theorists. For Christians “working for justice, loving the justified” (p. 55) is something which flows out of the new political reality we confess when we pray “your kingdom come” (Matt 6:10) and is nourished as we proclaim and embody these gospel truths to one another.