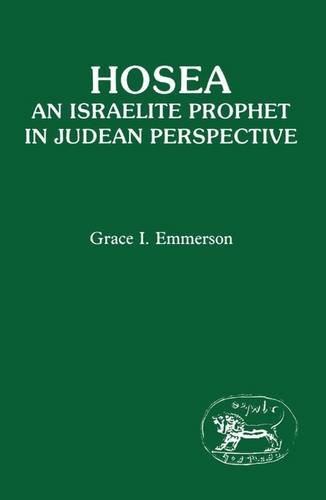 This book is a study of the redactional activities of the Judahite editors of the text of Hosea after its transmission to the kingdom of Judah subsequent to the fall of Samaria in 721 bc. More particularly, it examines expressions of future hope in Hosea, references to the southern kingdom, and polemic against northern cult practice—all three being areas in which theological opinions incompatible with those held by Hosea have often been sought, and found. In the case of the first passages the conclusion is that there is very little secondary (this term is not used in a pejorative sense by the author) material in such texts, which are integral to their present contexts, and that they are also marked by a distinctive theology of repentance which is authentically Hoseanic. Such secondary material as does appear in these contexts is recognized by thematic and grammatical detachment from its surrounding text, and characterized by a different theology of repentance, i.e. one which requires repentance as a pre-condition of salvation, in contrast to Hosea’s own view, which was that repentance is made possible by God’s saving acts and follows them.

Examination of references to Judah and the Davidic dynasty yielded the conclusion that Hosea himself offered criticism of Judah’s hostile stance towards Israel, that there is nonetheless in Hosea a sense of nostalgia for, and confidence in, the Davidic royal house, and that only the criticisms of Judah’s cult and religious life in general reflect the theology of the Judahite editors of the text of Hosea. In the third area covered, that of northern cult practices, it is reported that Hosea had no quarrel with the existence of sanctuaries such as those of Gilgal and Bethel, which were hallowed by ancient tradition, but where attacks are made upon their legitimacy one may again recognize Judahite influence at work.

In all this Hosea is revealed as sharing theological standpoints with Deuteronomy, in which a positive attitude is revealed to the notion of a united nation, a pragmatic acceptance of monarchy as a stabilizing influence supplying continuity is discernible, and where the covenant values of Sinai are, as in Hosea, even by his Judahite editors, cherished and offered as a way to avoid the impending disaster of destruction and exile.

This book is a Newcastle-upon-Tyne PhD thesis, argued with clarity, simplicity, accuracy, erudition, sensitivity to the texts discussed and great respect for God’s activity in preserving and re-shaping the text ‘in the conviction’ (p. 156) ‘that what was addressed to a previous generation’ (i.e. Hosea’s hearers) ‘as a word from God still has relevance for a later time and a new situation’ (in the hands of its Judahite editors). As an attempt to record Scripture ‘as originally given’ and to distinguish it from God’s later activity, it must be rated very highly indeed.

The hope of a new age: the kingdom of God in the New Testament

The date of Deuteronomy: linch-pin of Old Testament criticism (Part 2)

A taproot of radicalism

Genesis, with an Introduction to Narrative Literature

The Poet and the Historian: essays in literary and historical biblical criticism