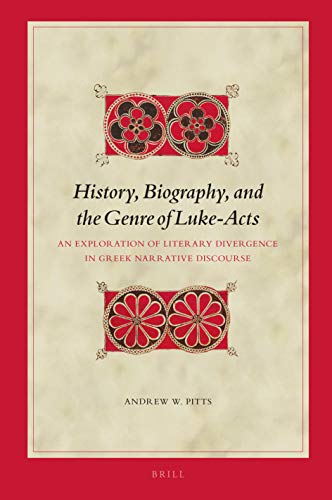 History, Biography, and the Genre of Luke-Acts: An Exploration of Literary Divergence in Greek Narrative Discourse

Andrew Pitts sets out in this book to contribute to debate about the genre of the Gospels and Acts, and specifically Luke-Acts. In particular, he seeks to critique of the mainstream and (these days) consensus position that Luke (in common with the other canonical Gospels) is ancient biography (bios). He argues that Luke-Acts should be considered as historical writing, by contrast with Matthew and Mark, which he considers to be bioi. He is thus aiming to overturn the key work of Richard Burridge, which underpins the recognition of the Gospels as bioi (What are the Gospels?, 3rd ed. [Waco, TX: Baylor University Press, 2018]), as well as Sean Adams’s claim that Acts is collective biography (The Genre of Acts and Collected Biography, SNTMS 156 [Cambridge: CUP, 2013]).

Pitts’s major methodological move is to suggest that previous study of Gospel genre has focused solely on identifying similarities with a particular genre of literature, to the neglect of differences which distinguish genres from each other. Thus, he claims that Burridge’s work, while identifying features which the Gospels have in common with bioi, also “catches” features found in other genres: history, moral philosophy, religious/philosophical teaching, encomium, story/novel, and political polemic. Burridge’s criteria are therefore inadequate to distinguish bioi from these other genres. Given that debate over the genre(s) of Luke and Acts has centred on whether they are bios or history, Pitts seeks to identify areas where those two genres differ in order to assess Luke-Acts against these differing characteristics.

Working with insights from systemic functional linguistics, Pitts argues that genres which are in close proximity, such as bios and Greek history, are best distinguished by gradations of difference (“clines”) along a series of scales which he identifies. He identifies eight areas for the study of history and bios which provide such scales of difference, and the major chapters of the book (chs. 3–6) work through these areas in turn:

This is quite an agenda, and Pitts identifies a set of histories and bioi for comparison with each other and Luke-Acts. There is some overlap with Burridge’s group of bioi, although Pitts notes that the bios genre takes some time to appear. He selects “biographical predecessors,” such as Isocrates’s Evagoras (4th/5th century BC), the collected bioi of Plutarch and Diogenes Laertius (2nd and 3rd centuries AD), and the individual bioi of Lucian’s Demonax and Philostratus’s Apollonius of Tyana (2nd and 3rd centuries AD). His set of histories ranges from Herodotus and Thucydides (5th century BC) to Josephus’s Antiquities and Appian’s Civil Wars (1st/2nd century AD).

On each of Pitts’s criteria, he finds that Luke-Acts falls towards the historical end of each scale rather than the biographical, and he notes in some places that Matthew and Mark fall towards the biographical end. I found myself more persuaded on some points than others. His discussions of genealogies and opening features locate Luke nearer to the histories than the bioi, for instance. However, I found myself wondering how significant these features are in differentiating genres—some are not always present, so cannot be regarded as essential features of a genre. Pitts rejects the idea that Luke and Acts may belong to separate genres (pp. 170–71) and treats them as a unit, which somewhat skews the comparison. At times he uses evidence concerning Acts alone to make claims about Luke-Acts without seeming to recognize that he is doing this (e.g., pp. 142–43), and at other times he claims that evidence from Luke’s Gospel alone supports his case (e.g., p. 171). It would need a considerably longer discussion than this review to assess his arguments fully, for they are very detailed and include quite a bit of technical jargon (much of which is explained, it must be said). I imagine such assessment will be forthcoming in future scholarship on Gospel genre.

Three features of this book disappointed me. First, the proof reading and/or copy editing is inadequate: I found quite a number of errors of spelling, grammar, and word choice that careful checking should have avoided. Secondly, the book simply stops without answering the ‘So what?’ question. Pitts gives us no help in the difference his claimed results make to the way we read Luke-Acts, and particularly how we should read Luke differently from Matthew or Mark. I would have hoped to learn how my exegesis of these texts should change if I accept Pitts’s argument that Luke-Acts is history. Thirdly, I would have liked to know the basis of the calculations of “citation density” (pp. 151, 154, 160, 162). Pitts gives the number of citations in a work, the work’s word count and the “citation density,” but the density is not number of citations divided by word count (I’ve checked some). So how was it calculated?

I’m glad to have read this book, and I am sure that libraries will want to have it. It’s certainly a book which doctoral students and scholars working on Gospel genre will wish to consult—and frequently argue with.