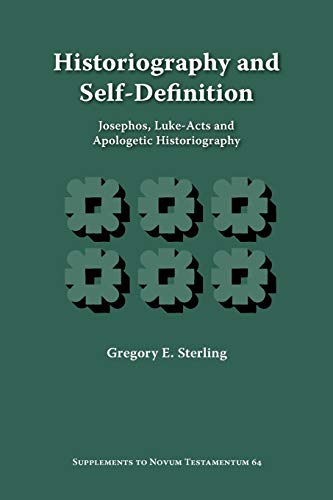 The question of genre has occupied many a Lukan scholar in recent times; the same could be said for the quest of the purpose of Luke-Acts. Gregory E. Sterling, in a slight revision of a Graduate Theological Union dissertation of 1989 (supervised by John R. Donahue, SJ) has offered a provocative and well-researched thesis which argues that Luke-Acts belongs to the ancient genre of apologetic historiography (not that that particular label was used by the ancients) and that its purpose, accordingly, is ‘to establish the identity of the group within the setting of the larger world’ (p. 17). Most of Sterling’s work is devoted to the development of his argument about the existence and nature of the ancient genre of apologetic historiography; of most interest to Themelios readers, however, will be Sterling’s placement of Luke-Acts in that genre and its concomitant implications for the unity, reliability and interpretation of Luke-Acts.

In his opening chapter Sterling traces the scholarly debate about relationship between genre and historiography, especially as it relates to the study of Luke-Acts. He thinks that ‘Luke-Acts is a historical work’ (p. 2) but warns that his own work does not ‘enter the tradition of scholarship within the framework of the debate over reliability, but on the basis of contemporary literary criticism’ (p. 3). He observes that ‘the issue of reliability can only be fully addressed once we understand the historiographical tradition of Luke-Acts and comprehend what the tasks and expectations of that tradition were’ (p. 3). After noting the various ways in which ancient ‘historical’ writings may be classified, he offers a preview of his own conclusions by positing the existence of a previously unrecognized genre: apologetic historiography. Apologetic historiography ‘is the story of a subgroup of people in an extended prose narrative written by a member of the group who follows the group’s own traditions but Hellenizes them in an effort to establish the identity of the group within the setting of the larger world’ (p. 17).

Sterling believes the name ‘Luke’ refers to a third-generation Christian who wrote between 80–90 ce, using Luke (Paul’s companion) as an authority for the latter half of Acts (p. 326). Sterling acknowledges the unity of Luke-Acts and goes on to assert that it was from the outset conceived of as a single work in the mind of Luke (pp. 331–339). He suggests that Luke’s work represents an implied but mild criticism of his predecessors, notable for its restraint (Mark and Q; pp. 342–344). Taken as a whole, the work is the story of a people (i.e., not the story of individuals such as Jesus, Peter and Paul) and is intended to help Christians understand their place in the Empire (p. 385); it is apologetic historiography.

There are many strengths to the book. Those engaged in critical scholarship will appreciate this fresh and serious endeavour to understand Luke-Acts through its placement in a particular ancient genre. Sterling’s work is creative, yet his attention to detail and meticulous argumentation ensure that the work is never simply avant garde. Each chapter contains a wealth of background information. Sterling’s grasp of secondary literature is impressive and his discussions on the current state of scholarship are generally full and lucid. The footnotes provide ample documentation of sources so that the reader does not constantly need to refer to the bibliography, and the summary at the end of each chapter (except 6 and 7) competently pulls together the substance of Sterling’s argument. There are few typographical errors.

However, questions remain. Do Berossus and Manetho and their four Hellenistic Jewish successors whom Sterling cites as clear examples of apologetic historiography really provide enough evidence that apologetic historiography was a distinct and identifiable genre to the ancients? Most of their writing has come down to us in fragments and in fragments preserved in the writings of other ancient authors; if a convincing reconstruction of their work were not difficult enough (and Sterling does go to great lengths to establish this), the fluid nature of ‘apologetic historiography’ (which Sterling admits) makes it difficult to define in more than general terms. For example, for Sterling Berossus and Manetho were notable in that they were natives who offered corrections to the presentation of their people found in the Greek ethnographers; further, ‘the key element in their presentation was their own native records’ (p. 135). Yet this use of native records (via priestly informants) is important for the Hellenistic ethnographers Hecataeus of Abdera and Megasthenes (pp. 69–73, 97). Furthermore, the ordering of material and method of argument differed from writer to writer among the Hellenistic Jewish apologetic historians, so that one is left to wonder whether a distinct and recognizable genre is present. Clearly, as Sterling has argued, they are all interested to promote national interests and dignity among their own people and, perhaps, foreign readers—but does simply having the same goal in mind mean that a common genre is employed? The relationship between apologetic historiography and Luke-Acts is not clear when Sterling admits on the one hand that ‘our findings are too meagre to argue that the author of Luke knew the Hellenistic [Jewish] historians directly’ (p. 365), then concludes, on the other, that apologetic historiography played a ‘decisive role’ in the writing of Luke-Acts (p. 386). The classification of Luke-Acts is clouded when Sterling obliquely refers to it as the ‘creative transformation of apologetic historiography’ (p. 389). Is it a model of the genre or a transitional form of it? If the latter, how might this affect one’s approach to the interpretation of Luke-Acts or the expectations of it (e.g., with respect to the question of reliability) which one might have? In addition, if one were to argue that all historical writings from antiquity were, to a greater or lesser extent, ‘apologetic’ (i.e., they were not dispassionate history in the modern sense of the term), then it could be suggested that the chief difference between Livy and Josephus on this count is that Livy was part of the conquering people while Josephus was not. The difference between them, then, would not be one of literary genre but of political circumstance.

Despite its attractive presentation and clear argumentation, it is doubtful that the work will attract the audience it deserves owing to its length, the author’s penchant for lengthy and untranslated Greek, Latin and German sentences and his occasional lapses into details which are either not important for his argument or assume too much, or too little, expertise on the part of his readers. Moreover, while the book is worth having, its cost will undoubtedly put it beyond the means of most. Having said that, the book is worth reading and libraries may be advised to have at least one copy on hand. Dr Sterling is to be complimented for a worthwhile contribution to NT scholarship.