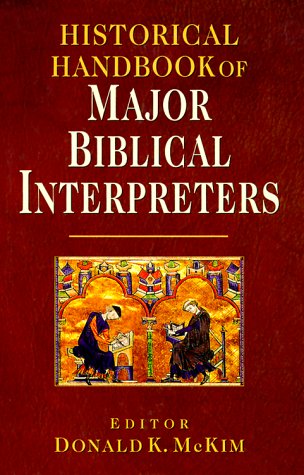 The history of Biblical interpretation is a major growth industry these days and therefore it is a particular pleasure to welcome this handbook, which contains biographies of 104 major interpreters from early times down to the present. The editor has made a real effort to ensure that writers from before 1800 are given adequate representation, with the welcome result that they take up about half the book. Different specialists write the articles and on the whole they are extremely well done. In every case we are given brief biographical details, a list of publications relevant to Biblical interpretation and an analysis of how each individual writer approached the Scriptures. It is this last feature which is especially valuable and which will make the book an essential resource for anyone studying the history of Biblical interpretation. There is also a bibliography of the person’s own writings and a selection of studies to round off each article. In most cases, the compiler of the article has engaged directly with significant recent work on their subjects, which is a great help in deciding which of the bibliographical items to look at first.

The handbook is divided into chronological sections, beginning with the early church and continuing through the middle ages, the reformation and post-reformation period and the eighteenth and nineteenth centuries (combined in one section). The twentieth century is divided into two parts, one devoted to Europe and one to North America. Each section begins with an overview of the period as a whole, which is then followed by the biographies in alphabetical order. This makes it easy to find whoever one is looking for, though F.J.A. Hort is combined with B.F. Westcott under W, and Thomas Aquinas is put at the beginning of the alphabet instead of towards the end, where he more properly belongs. The disadvantage of the alphabetical approach is that it is impossible to follow the development of concepts and ideas, like covenant theology for example, or the documentary hypothesis, unless one is fully aware that a man like Julius Wellhausen, with whom the documentary hypothesis is now usually associated, was actually developing and refining a theory which was already at least two generations old.

Of the chronological divisions, the most interesting is the one devoted to the reformation and its aftermath. Luther and Calvin have so dominated study of this period that others have been pushed to the sidelines, and seventeenth-century thought has frequently been ignored on the ground that it is too dogmatic and ‘pre-critical’ to appeal to a modern audience. This handbook does its best to correct that impression, and both the introductory essay by R.A. Muller and a number of the biographies are outstanding. The medieval period is short-changed by comparison, but at least it is there. More controversial is the division of the twentieth century along geographical lines, something that is almost certainly due to the book’s American origins. Ninety percent of the contributors come from North America, which will also be the book’s main market, so a special interest in American Biblical interpretation is understandable. Yet it is noticeable from the introduction to the final section how dependent Americans have been on European models, even in this century. Some readers (and not only Europeans) will be surprised to discover that since 1980, in the essayist’s judgement, the brightest and best American scholars have stayed home and gone to American graduate schools. Others may not see the fact that the USA is now the great trendsetter in Biblical interpretation in quite as favourable a light as he does. Some American scholarship is extremely good, but a great deal of it is very third rate, and that unfortunately includes most of what might reasonably be called ‘trendsetting’.

Inevitably, in a book like this, readers are bound to wonder what the criteria for selection were, and the editor has tried to anticipate objections to his choices in the introduction. Unfortunately it appears that the main principle of inclusion was his own personal preference, which is not very satisfactory. Personal preference is bound to play an important part in any selection, but it would be reassuring if at least some objective criteria could be mentioned as well. Biblical interpretation tends to be rooted in exegesis, theology and exposition (preaching) and most Biblical interpreters can be appreciated from one or more of these starting points. Some, like Luther and Calvin, shine equally in all of them, but most are remembered for their contributions in only one of these three fields. If the editor had borne that in mind over the book as a whole it might have been easier to justify certain entries and provide a more balanced approach over all.

For example, it is hard to see how Irenaeus, Justin Martyr or Tertullian can be regarded as major Biblical interpreters from an exegetical point of view, though their stature as theologians might justify including them. John Chrysostom and Bernard of Clairvaux are remembered mainly as great preachers, though Chrysostom was also a gifted exegete, as his biographer points out. But there are no great preachers to represent the modern period, not even Spurgeon or Martyn Lloyd-Jones. Has preaching disappeared as an important vehicle of Biblical interpretation? Perhaps it has, but the question is surely worth discussing in a historical study like this one.

Among omissions, the saddest is Ambrosiaster, an exegete on a par with Origen and Chrysostom, who does not even get into the index. Also missing are Bede, Gregory the Great and the German pair Keil and Delitzsch. They really ought to have been included and if space was an issue, people like Miles Coverdale and Richard Hooker could easily have been left out. Neither of them could qualify as a major Biblical interpreter in any of the above categories and the same must be said of Pilgram Marpeck and Kierkegaard. In cases like these it is impossible not to think that clearer guidelines on what type of person should be included would have produced better choices.

Evangelicals will be disappointed to discover that they are not well represented, which is surprising given that the book comes from an evangelical publisher. That may help to make it more credible in the non-evangelical world, but it is a pity that there is so little sign of the evangelical renaissance in Biblical studies which has gone on since 1945. No doubt, part of the reason for this is that with a biographical approach current trends in Biblical studies are not really considered in the way that they should be. Few of the subjects treated are still alive and those that are have made their contribution already. The up and coming generation will have to wait until it enters history for a book of this kind to include its leading representatives and perhaps then we shall see a more substantial evangelical presence.

Any book of this kind will have its gaps, but for what it covers it will be hard to beat. Certainly those who take a serious interest in studying the history of Biblical interpretation will have to obtain it and will want to consult it often.