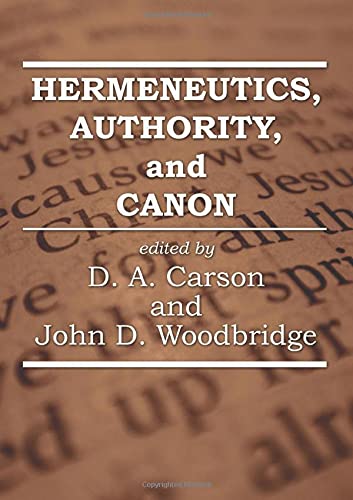 This book is a companion to the earlier volume, Scripture and Truth (IVP, 1983), by the same editors. The same basic thesis is again presented here, i.e. the evangelical view of the phenomenon of Scripture and its implications for the modern critical debate. Most of the contributors belong to a new breed of evangelical scholars and have written many books and articles on several topics. The nine essays are on three specific areas, as the title indicates, though not evenly distributed.

First of all comes an introduction by Carson, the wide scope of which, together with the clarity of expression characteristic of the author, makes it an excellent way into the debate. Kevin Vanhoozer writes on Biblical Semantics. He argues for a concept of propositional revelation that allows for a due appreciation of the varied literary forms in the Bible. Moises Silva addresses the question of Historical Reconstruction. He presents two test cases: first-century Pharisaism and Christianity. Silva pinpoints some well-established prejudices which hamper a better understanding of the NT. He contradicts the idea that the Pharisees were ‘too strict’ in their observance of the Law. Silva demonstrates that their problem was exactly the opposite, viz. ‘the relaxation of God’s standards’ (p. 119). Craig Blomberg deals with the problem of Harmonization. His thesis is that ‘additive’ harmonization (where one account complements the other), in conjunction with Redaction Criticism, can be legitimately employed to explain many discrepancies in the Bible.

Douglas Moo discusses the problem of sensus plenior (‘full sense’). He believes that a better alternative can be found in a ‘canonical approach’ that sees the NT use of the OT within the ‘framework of the canon as witness to salvation-history’ (p. 209). John Frame concentrates on the work of the Spirit in revelation, inspiration and internal testimony. He challenges the Barthian school on its assumption that the orthodox view of biblical authority denies God’s (the Spirit’s) sovereignty. He also states against G. Berkouwer’s distinction between the message and the form of Scripture: ‘Believing Scripture is believing that message [Gospel]’, and ‘believing the message entails believing the book’ (p. 228).

John Woodbridge contradicts the widespread idea that modern evangelical emphasis on inerrancy originated as a reaction to the rationalistic outlook of the Enlightenment. He makes a strong case for the continuity of the doctrine of inerrancy held by the Reformers and modern evangelicals. G. Bromiley surveys Barth’s position regarding biblical authority, especially his view of the Scriptures as being witnesses to but not revelation themselves, and Barth’s dismissal of inerrancy. But Bromiley sees merits too in Barth’s view, particularly in his emphasis that the Bible derives its authority from God himself.

D. Dunbar contributes the only (but lengthy) essay dealing with the canon of the Scriptures. In the discussion of the canon of the NT he agrees with Ridderbos’ approach to canon history, viewing it on the basis of Salvation-History as the matrix for the church’s recognition of the NT books.

The reading is not always easy. Vanhoozer’s essay, for instance, has a lot of linguistics jargon. Also, one cannot fail to notice that some of the proposals here are too tentative, needing further elaboration and testing. This is clearly the case with Moo’s very interesting view of the canonical approach to the complex problem of the NT usage of the OT, and Blomberg’s additive harmonization. Nevertheless, much new ground has been explored. Woodbridge’s essay on the Enlightenment is an important contribution in the light of modern controversies about the doctrine of inerrancy. Dunbar’s study of the biblical canon, if not revolutionary, is no doubt an exciting and refreshing review of an issue that has been brought to the fore in recent scholarship (e.g. J. Barr, B. Childs).

On the whole, an impressive collection of essays, on relevant issues related to Scripture, by scholars who are able to combine solid scholarship with a strong commitment to the authority of the Word of God. A combination not always easy to find these days.