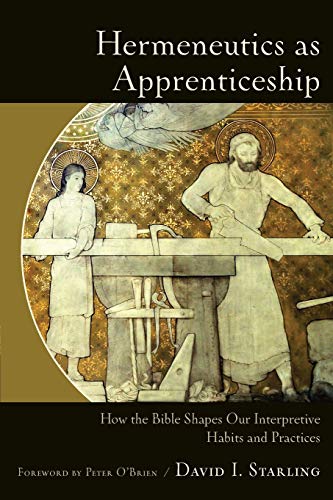 Hermeneutics as Apprenticeship: How the Bible Shapes Our Interpretive Habits and Practices

What if the nature of Scripture is a snowball rolling down the “hill of salvation history,” with each accumulative layer of understanding providing the weight and direction on which the next layer could be read upon? What if learning the art of interpreting Scripture is apprenticeship to the interpretive practices of biblical writers on Scripture? These two interesting metaphors of David Starling (pp. 14, 19), the snowball and apprenticeship, provide the basic thrust of his book––we can better our biblical hermeneutics by being a student to inner-biblical interpretation.

Beyond the introductory chapter, Starling leads us through fifteen books of the Old and New Testaments (Psalms; Deuteronomy; Ruth; 1–2 Chronicles; Proverbs; Job; Zechariah; Matthew; Luke; John; 1 Corinthians; Galatians; Hebrews; 1 Peter and Revelation). In each of the books that Starling discusses, he begins with a focal issue related to modern interpretation. This is followed by an analysis of how the biblical writer(s) interpret or apply Scripture before concluding with some implications for Christian hermeneutics. The exception is the last chapter, on Revelation, which discusses how the epistle encourages the readers by what they read and experience, as they anticipate what is to come (pp. 194–95). A snapshot of Starling’s treatment on the books of Ruth and 1 Corinthians is provided in this review.

The focal issue Starling highlights in the book of Ruth relates to virtue and interpretation. Does virtue affect one’s reading of Scripture? In the book of Ruth, Starling views Boaz as the “paradigmatic virtuous interpreter” (p. 49). He argues that Boaz’s understanding and application of Mosaic laws concerning the redemption of land (Lev 25), levirate, and Moabite marriages (Deut 23, 25) and gleaning practices (Lev 19, 23) did not reflect “letter-righteousness” or “scientific jurisprudence” (p. 54). Rather, they expressed the virtue of “love, courage, generosity and humility” (p. 54). At the peril of losing his social status (Deut 23:3) and wealth (Ruth 4:6), Boaz’s gracious acts toward the widow and foreigner (Deut 10:18; 24:19–22) expressed the spirit of the law and God’s steadfast love. In other words, the author(s) of Ruth has shown us how the Torah was interpreted under a larger rubric of Yhwh’s character and steadfast love (חֶסֶד), shown not just to his chosen people but also to all who take refuge in him. Through the characters, Naomi and Ruth, the book of Ruth also expressed an inclusiveness, which is read by the “rich and poor, men and women, outsiders and insiders, full and empty, as their lives intersect within the community of God’s people and under his sovereign hand” (p. 55).

For Starling, the focal issue in 1 Corinthians is associated with Christian systematic theology. He avers, “if there is anywhere in the New Testament where it is worth seeking a warrant for doing theology and some guidance on how to do it, 1 Corinthians is that place” (p. 131). For instance, with regards to food offered to idols in 1 Corinthians 8–10, Starling argues that Paul’s focus was on the Corinthians’ failure to apply food laws to build others up in love rather than on theological misjudgement (1 Cor 8:1; 9:19–22). In developing his response to the issue, Paul also connected the historical event of the exodus (1 Cor 10) to his readership, and assumed “universal relevance and applicability” (p. 139) in his reading of Scripture. Paul’s reading provides a helpful case study for formulating Christian theology. Starling shows us how Paul dealt with arising socio-theological issues not by simply quoting Scripture but using it with love (p. 144). Paul also interpreted Old Testament texts through a historical-salvific perspective, connecting his readership to the “larger story that includes the story of Israel and its fulfilment in Christ” (p. 144).

Starling’s book is outstanding in at least two ways. First, he has presented the difficult and complex topic of inner-biblical interpretation in a concise way, unhindered by technicalities or jargon, which is helpful to non-specialists. Starling also skilfully integrates whole books’ theology and rhetorical features––a feat not easily achieved! Second, by fronting an interesting focal issue at the beginning of a chapter and raising relevant pertinent questions, Starling engages his reader with an interesting modern hermeneutical concern for reflection. Besides the concerns of virtue and the place for systematic theology in interpretation, another interesting issue is the use of red letters to highlight the words of Jesus in some modern English Bibles and how they can influence interpretations in the Gospel of Matthew.

However, there are three drawbacks of this book. First, I feel that Starling has not addressed satisfactorily the implication of his analysis. Although his observations are important, it is not clear how inner-biblical interpretation methods can be emulated. For instance, Starling notes that although Revelation is filled with images and concepts from the Scripture, it “does not contain a single scriptural quotation that is overtly identified” (p. 194). In other words, it was not always easy to identify how inner-biblical interpretation was at work, let alone emulate it. Hence, it is difficult to fully identify with the metaphor of apprenticeship. To what extent can we follow the interpretive methods of the biblical authors? Second, Starling has certain assumptions and generalizations in his work. For instance, directions of textual dependence are generally assumed without much clarification (e.g., the book of Job depended on Proverbs). At times, Starling’s observations may appear too general (e.g., the author[s] of 1–2 Chronicles interpreted earlier texts “historically” and “intertextually,” p. 65) and applicable to any other book. A brief final point concerns an imbalance in the treatment of the selected Old and New Testament books (by page count, Starling’s treatment of the NT is 1.5 times longer than the OT).

In sum, Starling’s work is to be commended. The overarching idea of his book is important and his observations of inner-biblical interpretations deserve a close reading.