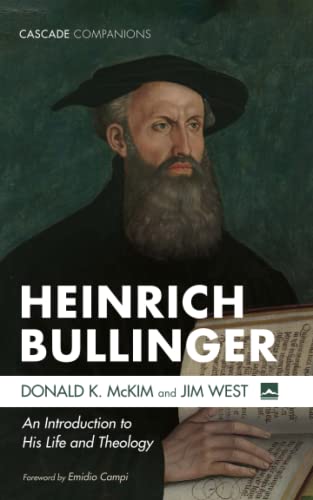 Heinrich Bullinger: An Introduction to His Life and Theology

In late 1531, a twenty-seven-year-old Bible teacher suddenly became a refugee as a Catholic army claimed victory over the Zurich forces. The young man fled in the night while his friend, mentor, and soon-to-be predecessor perished on the battlefield. Two months later, that refugee, Heinrich Bullinger (1504–1575), accepted the post of people’s priest (Leutpriester) at the Grossmünster in Zurich. He assumed that position after the shocking death of its previous occupant, Huldrych Zwingli. From that office, Bullinger led the Zurich Church for the next forty-four years while also helping to shape the budding Reformed tradition. Bullinger’s life and significance have come into view in the last few decades, but there is more work to be done. Donald K. McKim and Jim West’s work, Heinrich Bullinger: An Introduction to His Life and Theology, offers a welcome addition to the historiography.

Neither McKim nor West are strangers to writing on the history of the Reformed tradition, and they enter the genre again to provide a brief sketch of the life and thought of the Zurich reformer. The authors attempt to introduce Bullinger’s “thought as clearly as possible so his views can be understood and considered today as Christians reflect on their faith” (p. 152). While this work provides a welcome introduction to Bullinger’s life, it remains more devotionally and theologically focused and is less concerned about presenting the reformer’s thought in his own context.

The authors aim to situate Bullinger’s importance to the beginning of the Reformed tradition. Because he has been denied attention commensurate with his importance in his own sixteenth century context, McKim and West have done well to broaden the discussion. Through heavy reliance on Bullinger’s own words, the reader gets a better sense of the kind of preacher and writer he was. One hopeful result of this book would be to inspire more focused scholarship on his life and thought.

McKim and West survey Bullinger’s thought through extensive quotes from the reformer’s most well-known works, The Decades and The Second Helvetic Confession, followed by explanations and exhortations for what the reader should consider for their own faith. The theological categories are ordered mostly through the doctrinal loci Bullinger employed in his own works, beginning with Scripture, God, and Christ. The authors acknowledge Bullinger’s embrace of covenant theology (though without mention of his foundational work on the subject) and delve into his own understanding of election and double predestination, as well as his views on the Supper, Baptism, the role of civil authorities, and eschatology—all important categories for the early reformers. In the final chapter, the authors offer a summary of Bullinger’s enduring significance, prescribing to the reader how his theology may encourage and challenge the faith of Christians today.

Admittedly, this short survey is more devotional and theological prescription of belief than historical analysis. Readers should not expect to find strict focus and clarity on Bullinger’s thought alone. Rather one should expect to enter a theological dialogue alongside McKim and West. While the authors aim to give a clear view of Bullinger to the reader, that view is at times unclear when cast as a prescription for contemporary belief. At one point, the authors speak to Bullinger’s understanding of sin and disagree with his conception, suggesting it is outdated. At other times, Bullinger’s faith is held out as a model for the reader to embrace. The authors discuss the reformer’s views of election and work to help the reader who might be questioning whether they are among God’s elect. At times, the authors are explicit that theology is the focus. For example, the chapter titled “God” opens, “In this chapter we will investigate, with Bullinger as our guide, the person and work of God” (p. 32). The subject of investigation is, therefore, a theological category rather than the preacher himself. This blurring of theological and historical lines creates an environment in which Bullinger is treated as a mere Zwinglian or lauded at the unnecessary expense of John Calvin. More nuance would be appropriate. While the book does accomplish the intended goal of providing space for readers to consider their own beliefs, it falls short of offering clarity about Bullinger’s beliefs in his own context.

The Swiss reformer was pivotal to the success of the Reformed tradition in his own day, and he is worthy of our attention today. The English world, in particular, has lagged in consideration of this crucial reformer, and McKim and West do well to prod readers toward a better look at Bullinger. While this work will be a good resource for Christians considering their own views and will surely spark more historical interest in the reformer, it is not strictly a work of history. It will be most beneficial to the reader who is interested in Heinrich Bullinger and wants to consider their own beliefs in conversation with McKim, West, and the Zurich reformer.