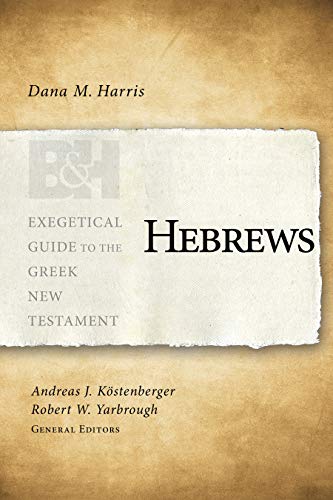 Dana M. Harris is an associate professor of New Testament at Trinity Evangelical Divinity School in Deerfield, Illinois. She received her PhD from TEDS, and her dissertation was on “The Eternal Inheritance in Hebrews: The Appropriation of the Old Testament Inheritance Theme by the Author of Hebrews.” She has been the editor of Trinity Journal since 2010.

This volume on Hebrews is the tenth volume in the EGGNT series. The volume begins with a brief overview of introductory matters related to the epistle. Harris rejects Pauline authorship but believes that the unknown author was close to or known by Paul. She explains that the author was a second-generation Christian, the style and vocabulary used are at variance with Paul, and the theological motifs of Hebrews are different from those of Pauline epistles. Apollos is a possible candidate; however, there is no direct evidence indicating he was the author. Harris posits that the author could be a Hellenistic Jew who was familiar with the Septuagint and cared about his audience. Yet we do not know who wrote the epistle.

The audience could be second-generation Christians who possibly lived in Rome and who persevered in the face of persecution in the past. These believers were about to go through another persecution; hence, the author wrote his “message of exhortation” (13:22) to encourage them to persevere and be faithful. Harris states that the audience is likely to have been Jewish Christians who were tempted to return to Judaism. She also believes that the epistle was composed before the destruction of the temple.

Harris surmises that the exordium (1:1–4) encapsulates what the epistle is all about. Thus, the readers are alerted to the forthcoming themes of the letter. The adjective κρείττων reveals that the Son is superior to the OT revelation, angels, Moses, the Levitical order, the Mosaic Covenant, and the Levitical rituals. Since Jesus is better, believers should persevere and remain faithful to him.

The use of the OT in the epistle abounds. Harris notes that the author employs quotations, allusions, and typology to indicate that the OT adumbrates that Jesus is the fulfiller of the promise. The structure of the epistle lacks scholarly consensus, and Harris finds the bifurcation between exposition and exhortation to be unclear (see George Guthrie, The Structure of Hebrews, NovTSup 73 [Leiden: Brill, 1994]; and recently Jared Compton, Psalm 110 and the Logic of Hebrews, LNTS 537 [London: T&T Clark, 2015], which depends on Guthrie’s work). In concluding the introduction section, Harris recommends six major commentaries, as well as a handful of articles and books, on a general introduction and the theology of Hebrews.

Harris’s outline divides the epistle into eight major headings. Each pericope begins with a structural analysis of the respective passages followed by a diagram of the passage, a verse-by-verse explanation of the Greek text, and a bibliography for further study on some pertinent themes, ending with a homiletical suggestion to enable preachers and teachers to utilize the book in their ministry.

The syntactical analysis of the Greek text is comprised of the parsing of finite verbs, participles, subjunctives, infinitives, and imperatives. Nouns and adjectives are also declined selectively. Harris consults BDAG (mainly), BDF, and Wallace in identifying functions of the Greek terms. The select six commentaries (Attridge, Bruce, Cockerill, Ellingworth, Koester, and Lane) are also consulted for their exegetical and theological insights.

Harris identifies several debated texts throughout this volume and provides proposed interpretive options and notes her preferred option. The age-old controversial passage in Hebrews 2:11, ὅ τε γὰρ ἁγιάζων καὶ οἱ ἁγιαζόμενοι ἐξ ἑνὸς πάντες is one example. What does ἐξ ἑνός (“from one”) refer to? Is the gender of ἑνός neuter or masculine? Harris lists four options put forth by scholars: one humanity, one origin (Adam), one ancestor (Abraham) and one source (God). Harris opts for a masculine gender to refer to God.

Concerning textual criticism, Harris treats at varying length some of the variant readings in Hebrews. Of the main ten variant readings Attridge identifies in his commentary (1:8; 2:9; 4:2; 9:2–3; 10:1; 11:4, 37; 12:7, 11), Harris comments only on 2:9; 4:2; 11:37. Since she uses the UBS5 edition of the Greek New Testament instead of NA28, some notable variant readings are understandably not be in her purview. Nevertheless, she does address other variant readings not identified by Attridge.

Subsequent to each unit’s exegetical discussion, Harris provides a wealth of bibliographic information for further study on select themes. She has 106 topics with a varying number of bibliographic entries under each one. However, the majority of the suggested readings are published in or before 2012. Also, more consistency in using syntactical terms would have been helpful. For instance, Harris uses “constative aorist” and “global aorist” interchangeably throughout this book to describe an action which occurred in the past which is concerned with the action in its entirety (see pp. 16, 28, 55, 56; 30, 47, 48, 49).

Regardless, this volume is an invaluable resource for anyone who wants to study the Greek text of Hebrews. The exegetical insights, the bibliographic information provided under each identified theme, and the homiletical suggestions are ideal for scholarly research as well as sermon preparation. The volume requires intermediate or advanced knowledge of Greek grammar and thus may be inaccessible for beginning Greek grammar students.