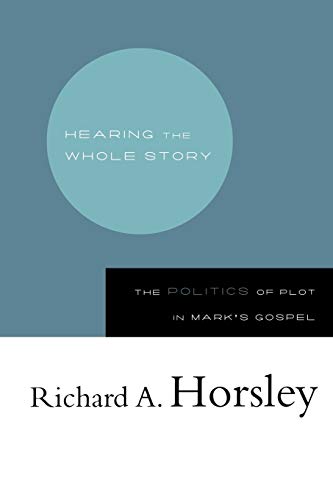 HEARING THE WHOLE STORY: THE POLITICS OF PLOT IN MARK’S GOSPEL

Richard Horsley’s contributions to our knowledge of the socio-political situation of first century Palestine are well-known and valued. In this book he attempts, against this scholarly background, to help us to see Mark’s gospel in a new light. The book abounds in varied challenges to accepted interpretation, but two main theses predominate: (a) that Mark’s gospel represents the distinctive perspective of Galilee (and especially the village Galilee) as opposed to Judaea; (b) that it is a text for oral performance in a basically illiterate world, which must therefore be read as a whole, not studied as separate pericopes. Neither of these insights is new, and in the first chapter I found myself irritated by the implication that the author was opening up a brave new world when the essence of his approach has in fact been the staple diet of Marcan studies for a decade or more. But as the book goes on he certainly develops these basic insights in fuller and potentially more mould-breaking ways. Here are some of his proposals.

Unlike most books which are written by and for the ruling élite, Mark is ‘people’s history’. First-century Palestine is best understood as a ‘third-world’ region comparable to present-day Iran or Afghanistan. Illiteracy was very high—possibly as high as 97% in Roman Palestine. Horsley questions whether a Galilean village would have possessed any OT scrolls (even of the Torah), or anyone who could read them. Appeals to ‘scripture’ are not to written texts but to remembered tradition. Galilee did not have the Torah at all until it was conquered by Judaea in 104 bc and what Jesus represents is not the Torah-based ‘great tradition’ of Jerusalem but the ‘little tradition’ of Galilean villages, based on fundamental Israelite norms rather than Jerusalem Torah.

The Pharisees were a Jerusalem-based group who did not operate in Galilee except as emissaries from the temple authorities. ‘Synagogues’ were not religious buildings like our churches but village assemblies, loudaios (‘Jew’) was not a religious but a regional term for an inhabitant of Judaea, so that Jesus was not a Jew but a Galilean Israelite. By reading the gospels as dealing with two rival religious traditions, ‘Judaism’ and ‘Christianity’. NT scholarship has badly skewed the gospels, which are about the confrontation between subject peoples of village Galilee and the ruling authorities (Roman and Judaean) in Jerusalem. It was Jesus’ mission to restore the Israelite covenant community, a village-by-village renewal of Israel over against the rulers’ (109); Mark’s aim was to expand that ideology to neighbouring village communities outside Galilee Jesus’ exorcisms were political acts (Satan and demons represent Rome); Horsley milks the name ‘Legion’ for all it’s worth, and interprets it by means of a dubious model of French colonisation of Algeria.

I hope this brief anthology of themes gives a fair impression of the boldness of some of Horsley’s proposals. Readers who want to get the gist of his argument would be well advised to read pages 111–19 first which are a useful overview of recent socio-political thinking about first-century Galilee and Judaea. But like all good reformers Horsley overstates his case. He can be selective with his use of NT evidence and sometimes, in C. S. Lewis’ famous words, is so subtle in his reading between the lines that he fails ‘to read [in any sense worth discussing] the lines themselves’. I find it particularly hard to believe that Mark could have been read, or even intended to be read, in so determinedly non-theological a way (Jesus as prophet of social renewal rather than as Messiah and saviour) in a world where the theology of Paul was already widely disseminated.

Anyone concerned to read Mark in the light of its original context cannot fail to gain from this book new perspectives and challenges to inherited assumptions. It is both stimulating and infuriating, as good scholarship should be. But I am not sure that if I had read it before writing my new commentary on Mark I would have gone about the task in a fundamentally different way. I found myself wondering what sort of commentary Horsley would write—but perhaps he would rule out the enterprise of a written commentary as inappropriate to a text written to be performed, not analysed.