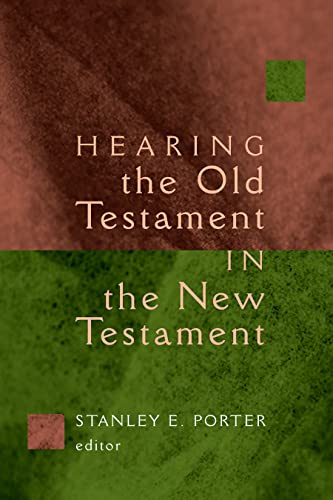 Hearing the Old Testament in the New Testament

This volume of the McMaster New Testament Studies comprises mainly revised papers originally presented at the 2003 H. H. Bingham Colloquium in New Testament at McMaster Divinity College in Hamilton, Ontario, Canada. The only exception is the final essay by A. J. Köstenberger, which acts as a summary and critique of the other papers.

Porter, the editor, introduces the book and summarises each contribution. The next two essays deal with general introductory comments and should be read by all who intend to consider more deeply this particular field. D. L. Stamps (“The Use of the Old Testament in the New Testament as a Rhetorical Device: A Methodological Proposal”) discusses the NT authors’ use of the OT as a rhetorical device for persuasion. Stamps attempts to steer away from the intent of the NT authors in quoting from the OT to consider how such quotations or allusions would be understood by the NT’s audience. Furthermore, Stamps attempts to contextualise this quest against the background of Hellenistic literature, including rhetoric, rather than solely against contemporary Jewish exegetical practice. This particular attempt, while thought-provoking, perhaps falters due to the lack of satisfactory evidence.

Starting with the assertion that there was ‘no sense of a canon during the early church,’ R. T. McLay (“Biblical Texts and the Scriptures for the New Testament Church”) discusses how we know that a NT writer is quoting the OT and what versions the NT writers were using. Using Heb 1:6 and Odes 2:43 as his paradigm, McLay states that the NT writer relied on the LXX rather than the MT or Qumran. This reviewer found Köstenberger’s analysis of McLay’s argument balanced and helpful.

The next eight essays deal with the corpus of the NT and follow the canonical sequence. The papers are certainly stimulating though sometimes they cast greater light on the particular interests of the contributors. On occasion, the idiosyncratic approaches left this reviewer slightly exasperated. Nevertheless, any scholar who wishes to consider the use of the OT in a particular NT book should certainly consult the corresponding essay in this volume. The copious footnotes and excellent indices should also prove a fruitful jumping off point for all who wish to go deeper. Anyone studying the use of the OT in the Pastorals, General Epistles, and Revelation will be grateful to Köstenberger for his twenty-five-page whirlwind tour.

Köstenberger’s final essay reviews and critiques the papers of the other contributors. This critical reflection is a new addition to the series and will help the reader focus his or her thinking and provoke further discussion. Furthermore, even if one disagrees with his conclusions, it is an excellent example of gracious interaction and penetrating analysis.

The natural space limits of the volume combined with the nature of the Colloquium result in a volume that at times feels disjointed. The contributors approach their subjects from a variety of working presuppositions and generally discuss only their allotted part of the canon. Some essays, while still stimulating, feel particularly restricted and are thus less helpful.

This volume remains a valuable contribution and an accessible starting point for those interested in this complex field of study. It is certainly not the final word on the topic as the editor himself acknowledges (p. vii). However, this collection may well stimulate others to reconsider the use of the OT by the NT authors. If it does, then we will all be indebted.