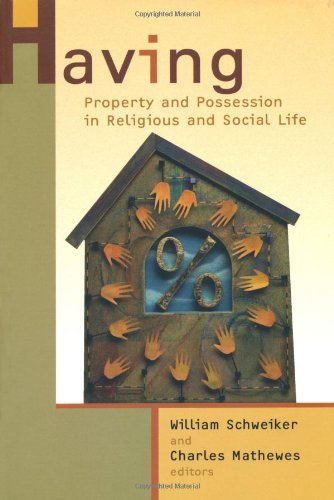 HAVING—PROPERTY AND POSSESSION IN RELIGIOUS AND SOCIAL LIFE

The editors describe the purpose of this very substantial volume of essays as that of providing serious, inter-disciplinary reflection on what the biblical tradition might have to contribute to a critical understanding of the present world situation in which, as they say, a consumerist mentality dominates contemporary culture and ‘spectacle and entertainment have replaced civil discourse’. The sixteen scholars who contribute the essays (who, regrettably, are not introduced to readers by means of the usual brief biographical descriptors) include theologians, biblical scholars, political scientists, ethicists and economists. They approach their task, we are told, in a manner that is ‘audacious and controversial’ in that while they repudiate the limiting terms set for such a debate within academia, they also recognise the difficulty involved in seeking answers to contemporary questions which the biblical narrative. The writers do not assume that the biblical message ‘is unambiguously pure and offers a simple counter-vision to the problems of “the world” ’.

That said, the book contains some rich and enlightening reflection on the Bible, including the opening chapter on ‘Property and Possession in the Light of the Ten Commandments’ which is a brilliant study tracing the ‘continuing trajectory’ of the law of God as it shapes the social and ethical vision of ancient Israel. Patrick Miller shows the dynamic power of the law in relation to the understanding of ownership and property and demonstrates how, rather than simply functioning in a negative manner in relation to disobedience, the commandments creates a culture in which property rights are understood in relation to the needs of neighbours whose well-being is endangered. Such ethical values become ‘a manifestation of one’s conformity to the order that God wills for human life and for the world’.

The first section of the book explores ‘Biblical trajectories and theological meanings’ on the subject of property and possession and includes both exegetical studies, historical perspectives, in particular a stimulating reflection on John Chrysostom’s preaching on wealth and poverty, and a chapter on ‘subjectivist faith’ as a ‘religious trap’. This is a trap into which evangelicals may easily fall and we do well to hear Michael Welker’s warning that purely subjectivist forms of faith undermine ‘content-laden and communicative piety’ and have ‘driven vast parts of the churches into a religious speechlessness and inability to communicate’.

Whatever difficulties one may have with this book, and it should be pointed out that it is far from an easy read, the authors are seeking to communicate, both within and far beyond the boundaries of an acknowledged faith. This becomes evident in the second and third sections which contain a range of profound reflections on the subject of property, and possession and should be required reading from theologians and ethicists concerned to develop a critical and missiological engagement with cultures shaped by unbridled capitalism.

I have a number of quibbles: it is regrettable that although the issue addressed here are global in their reach, there appears to be no non-Western contribution to this dialogue. Again, while the editors were bound to be selective in the topics that are included and the choice of Chrysostom is a valid one, I regret the absence of a study of the Franciscan tradition which might have yielded very valuable material on this subject. Finally, while we are supplied with a very helpful bibliographic essay it is strange that the publishers have not seen fit to include an index in a volume as important as this one. Despite these comments, the book makes a very significant contribution to theology and ethics and offers a welcome foundation for the double task of cultural criticism and the formation of a fresh, alternative socio-cultural vision.