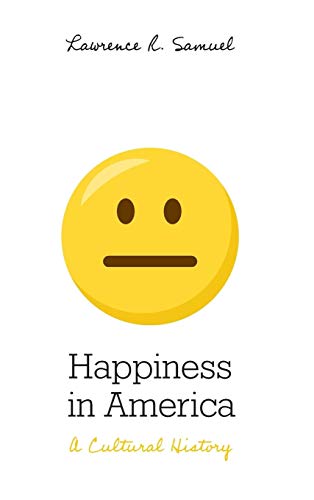 Happiness in America: A Cultural History

What do I need to be happy? Possessions? Relationships? An attitude adjustment? More hobbies? Better hobbies? Wine, women, and song? More serotonin? In Happiness in America: A Cultural History, Lawrence R. Samuel examines the role that “the pursuit of happiness” plays in the American self-concept and in our vision of a life lived well (the “American Dream”). Lawrence Samuel works as a culture consultant, advising corporations and advertising agencies on topics relating to cultural trends in the United States. Having earned a PhD in American studies from the University of Minnesota, he is the author of many books on the subject. He argues in this latest book that our definitions of happiness are ambiguous and incoherent, our methods of pursuing it misguided, and our expectations about it wrongheaded.

Drawing on both popular and scholarly sources, the book is organized chronologically. In the introduction, after presenting his basic message about happiness, Samuel briefly discusses the use of the phrase “pursuit of happiness” in the founding American documents and the general understanding of happiness at that time. He then proceeds to trace American thoughts on happiness through the interwar period (ch. 1), World War Two and the 1950s (ch. 2), the tumultuous 1960s and 1070s (ch. 3), the final two decades of the twentieth century (ch. 4), and the dawn of the twenty-first century (ch. 5). In the final chapter, Samuel presents his description of the current state of the pursuit of happiness, and then gives his concluding thoughts in an epilogue.

Samuel presents a consistent message, arguing that Americans tend to earnestly desire happiness, but we do not quite know what it is or what secret techniques we can employ to obtain it. Despite decades of research in which we see that happiness has no strong connection to material wealth, Americans seem unwilling to abandon the idea that if we just had more money or the newest gadget, we would enter into a state of long-lasting bliss. The search for the method or purchase that will ensure happiness is made more difficult by the proliferation of shallow self-help books (a genre that grew into a substantial body of popular literature in the 1930s) that overshadows the more scientifically-rigorous efforts by various scholars to assess happiness through surveys and laboratory research.

One possible outcome of this confusion is a recurring contrast between Americans’ self-identification as a happy people and the troubling levels of more objective indicators of psychosocial functioning (e.g., substance abuse, mental illness, stress, divorce, etc.). In addition, at every turn, we see counter-pressure being brought to bear by critics of “happyology,” who argue that happiness cannot be an end in itself but must be seen as a pleasant side effect of a life spent in the service of something more meaningful than individual subjective gratification. We also see scholarly disagreement over the degree to which happiness depends on individual effort versus social conditions. Some of us who are involved with the “positive psychology” movement might be surprised to learn that the application of social-scientific methodology toward a description of happiness, and a set of empirically-supported techniques for pursuing happiness, is a project that stretches at least as far back as the 1920s. We might also be surprised to see that the debates currently surrounding the science of happiness are, in fact, perennial.

Speaking of positive psychology, Dr. Samuel does a fair job of sketching out the birth and rise of this field, introducing us to eminent early researchers such as Ed Diener, David Myers, Richard Easterlin, and Mihalyi Csikszentmihalyi. The positive psychology movement officially began in 1998 with Martin Seligman’s tenure as president of the American Psychological Association. We get a glimpse into the research on learned optimism that gave Seligman the inspiration for his call to psychologists to give greater emphasis to a scientific understanding of the things that make life worth living. Samuel presents positive psychology as the latest (and greatest) manifestation of an ongoing project to create a science of happiness that can be fruitfully applied in order to give everyone a chance at living a happy life.

Despite his kind words for positive psychology (he concludes the book with a set of twelve tips drawn from a century of happiness scholarship), Samuel emphasizes the incoherence of the field. He describes the difficulties in defining happiness, measurement problems in the scientific research literature, contradictory theories of happiness, and general failures to produce universally-effective methods for teaching people how to be happy. In this way, Happiness in America joins the ranks of critics of happiness science such as Barbara Ehrenreich (Bright-Sided [New York: Metropolitan, 2009]) and William Davies (The Happiness Industry [New York: Verso, 2015]), cautioning us that the pursuit of happiness is not all that it is cracked up to be.

Those who are interested in a Christian perspective on happiness and/or positive psychology will have to look elsewhere. While this is an informative book about the history of twentieth and twenty-first century attempts to quantify and cultivate happiness, religion receives only a few passing mentions. For a Christian viewpoint, I recommend that readers seek out books such as Christopher Kaczor’s The Gospel of Happiness (New York: Image, 2015) and Mark McMinn’s The Science of Virtue (Grand Rapids: Brazos, 2017).