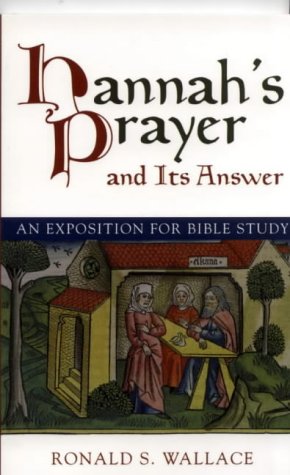 HANNAH’S PRAYER AND ITS ANSWER. AN EXPOSITION FOR BIBLE STUDY

This comparatively brief study of 1 Samuel 1–7 is a devotional rather than a scholarly work, so it is not encumbered with footnotes or explanatory digressions. Nevertheless the book contains a good deal of learning which is worn lightly but effectively, with considerable cross-referencing of themes to other parts of the Bible, especially the NT. As the subtitle indicates, the book is intended for Bible study (either individual or group), with text in hand, and it does an effective job in expounding the flow of the narrative and drawing out its significance for modern believers.

In taking 1 Samuel 1–7 as a discrete narrative unit, Wallace shows how Hannah’s prayer, born out of her troubled personal circumstance and her devout faith in Israel’s God, becomes the divinely used catalyst for transforming the spiritually degraded circumstances of the covenant people. The birth of Samuel is the answer to Hannah’s problem of childlessness, but more importantly it signals a way out of the religious torpor and the Philistine oppression that afflict the people. The comparisons between Hannah’s song (1 Sam. 2:1–11) and the Magnificat (Luke 1:46–55) are rightly brought out, although Wallace does not spell out sufficiently the Davidic-messianic significance of the former (cf. v 11), a point of great importance as well in the other (Davidic) poem that bookends this work (2 Sam. 23:1–7). In the course of this exposition a wide range of themes is touched upon: the character of true prayer and prophecy, worship, and repentance.

The outlook of this study is Reformed and theologically conservative in its doctrine of Scripture and narrative stance. This is no bad thing in itself (contrast Walter Brueggemann’s somewhat uncontrolled musings in his own exposition on Samuel). However, it would be interesting to see a nod in the direction of some social criticism of the world of pre-monarchic Israel. The serious tone of presentation also means that the book tends to be a little humourless, thus muting some of the notes in chapter 5–6, where the author is surely engaging in some mocking at the Philistines’ expense. These points aside, the seven chapters of this book provide a good devotional entrée to the study of 1 Samuel 1–7, and useful material as well for sermons. Since the OT is too much neglected in our churches today, an exposition of this kind is much to be welcomed.