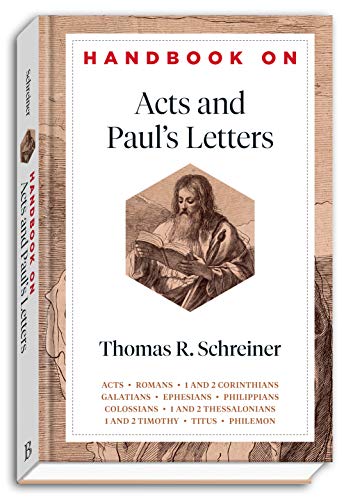 Handbook on Acts and Paul’s Letters

Thomas Schreiner’s Handbook on Acts and Paul’s Letters occupies the space, if space there be, between a typical New Testament introduction and an exegetical commentary. It represents the first installment in a three-volume series covering the entire NT canon. The series editor, Benjamin Gladd, intends each volume to provide “a snapshot of each New Testament passage without getting bogged down in detailed exegesis,” with “special attention to Old Testament allusions and quotations…. Each volume is theologically and pastorally informed” (pp. ix-x).

In fourteen chapters, varying in length from nine to over sixty pages, Schreiner provides us with a book-by-book exegetical overview of Acts and the Paulines. Matters of authorship, origin, destination, recipients, and date are briefly sketched, mainly to orientate the reader to Schreiner’s perspective, with the occasional nod towards alternative viewpoints. Luke wrote Acts in the 60s and the thirteen-letter Pauline canon is unequivocally Paul’s. With few exceptions, Schreiner does not dwell on the structure of the epistles, satisfied to offer concise outlines. Where he does expend his energy is exactly in the places Gladd told us to expect: each chapter is dominated by a running summary of the exegetical conclusions for significant sub-sections of each book. These summaries get at the heart of the message of each pericope and frequently highlight Luke’s and Paul’s use of the OT. There are occasional brief forays into matters of exegesis. From time to time, Schreiner warns the reader that the position he takes on a particular text is not without its detractors, but he generally rests content to direct his readers towards the more detailed commentaries for more information. Each chapter is followed by a fairly extensive list of commentaries, mainly from the 1990s through to the present, and a separate list of select monographs, essays and papers. Some classic works from the Reformation as well as the nineteenth century also appear amongst the commentaries. As one would expect, the book is rounded off with fine indexes of Scripture and ancient writings, as well as the subjects covered.

Given Schreiner’s extensive track-record of works on how to exegete Paul, a number of volumes of first-rate exegetical commentary, a monograph on the law, as well as a Pauline theology, it will be no surprise that he excels in handling the epistles. His approach follows the text closely without getting lost in the exegetical forest. Many will appreciate being able to get a digest of Schreiner’s positions on every passage in Paul, even in letters where he has not yet written a more extensive commentary. It will not come as a surprise that he reads Paul, and for that matter Luke also, in a broadly reformed manner. He stresses both Luke’s and Paul’s consciousness of salvation-history and their typological handling of the OT, without losing an appropriate degree of anthropological focus. I found his handling of the OT texts and allusions in the first half of Acts especially helpful.

However, there is some unevenness to the work. The chapters on Romans and Galatians are generally both more demanding and more incisive than those on, say, Colossians and Titus. This is not entirely surprising given Schreiner’s previous publication history. While matters pertaining to the use of the OT are handled well, the format of the work does not really provide scope to discuss alternative approaches to apostolic hermeneutics by scholars such as Richard Hays, Francis Watson, and Matthew Bates. One of my principal concerns is with the notion of the “passage,” or “section,” or even “paragraph.” Given the centrality of these intermediate units to the design of the series I would have thought that a bit more reflection, and maybe a bit more “showing the working,” might have been in order. Are these sections taken over from the editorial decisions of the critical texts? Or do they reflect ancient practice (cf. The Tyndale House Greek New Testament)? Or are they the result of the author’s top-down analysis of Acts and the epistles? Or a bottom-up synthesis from the cola of the texts and their cohesion? We don’t really get to see, and that I think is a weakness. Moreover, the discussion of the inter-relation of these mid-level units is also somewhat thin.

Nonetheless, Schreiner’s Handbook is a fine distillation of a premier exegete’s handling of the whole Pauline corpus. It provides a ready key to Paul’s letters that many students will find very helpful.