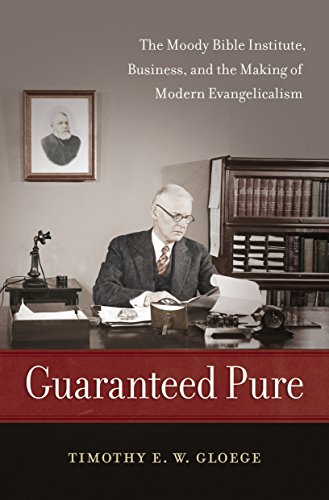 Guaranteed Pure: The Moody Bible Institute, Business, and the Making of Modern Evangelicalism

In this engaging and provocative study, Timothy Gloege seeks to show how two generations of evangelicals at the Moody Bible Institute (hereafter MBI) used new business ideas and techniques to create a modern form of “old-time religion,” smoothing the rise of consumer capitalism and transforming the dynamics of Protestantism in America.

In the first half of his book, Gloege examines post-Civil War evangelicalism under the influence of D. L. Moody and R. A. Torrey. Responding to labor unrest in Chicago, Moody (the shoe-salesman-turned-revivalist) strategized with local business leaders to build an army of “Christian workers” who could convert the middle class and restore social stability. In his efforts to create “Christian workers”—the evangelical version of the idealized industrial worker in the Gilded Age—Moody forged new links between economic identity and religious identity.

But when the masses from the working class were not converted and social order was not restored, Moody’s project was in crisis. His conception of the Christian life—a personal relationship with God, guided by a plain reading of Scripture, leading to practical and quantifiable results—was bringing more disorder than order. Instead of joining the respectable middle class, Moody’s working-class converts were becoming Populists (critiquing capitalism and professionalization) or Pentecostal (speaking in tongues and rejecting medicine). Even Torrey, Moody’s most famous evangelistic associate at MBI, had been led by his “plain reading” of the Bible and his “evangelical realism” to embrace faith healing, a decision that tragically cost his daughter her life when he delayed the administration of medicine while she was ill, bringing about controversy and scandal. The death of Moody—one week before the dawn of the twentieth century—can be seen as the death of respectable evangelical’s hermeneutical innocence. No longer could a plain reading of Scripture be embraced without fear of radically disruptive results.

In the second half of the book, Gloege traces the attempt of MBI to stabilize evangelicalism without depending upon churchly guardrails. This entailed the creation of a modern form of “old-time religion,” much of it owing to MBI board chairman Henry Parsons Crowell (who shifted the operating metaphor from Christian worker to Christian consumer) and dispensational Bible teacher James M. Gray (who popularized an esoteric alternative to Moody’s plain-reading of Scripture).

Just as Crowell’s Quaker Oats business had increased its market share by eliminating wholesalers—who traditionally funneled goods between retailers and consumers—Crowell positioned MBI to reach the end consumer of religion, the respectable middle class, while bypassing the institutional church and her denominations. To do this he used the tools of a consumer culture he had perfected at Quaker Oats: trademark, packaging, and promotion. Quaker Oats won the market through the visage of a smiling Quaker vouching for a “pure” product packaged in a safe and sealed container; so now the moniker of Dwight L. Moody guaranteed the purity of the product MBI was offering to savvy consumers who faced unprecedented choice in the religious market.

In order to carry the day, however, a historical tradition had to be invented that would function as a new standard of orthodoxy—a set of essentials or fundamentals capable of uniting a transdenominational coalition of respectable conservative evangelicals. This was achieved through the publication of The Fundamentals (1910–1915), funded by oil businessman and Biola founder Lyman Stewart and produced under the functional control of MBI.

In the final chapter of the book (before an epilogue that applies the book’s findings to contemporary evangelicalism), Gloege narrates the growing separation between MBI and the World Christian Fundamentals Association. Although they were largely on the same page theologically, key stylistic and political differences emerged between MBI and the militant fundamentalists. The demise of combative fundamentalism among the respectable middle-class was ultimately to the benefit of MBI, whose ministry continues to thrive today, even if it no longer dominates the conservative evangelical market.

Space does not permit a full enumeration of all the virtues in Gloege’s work. Written in lucid prose and told within a compelling narrative arc, this book is a treasure-trove of information for students of late-nineteenth and early twentieth-century fundamentalism and evangelicalism. His original archival work, along with his bringing together disparate fields not often in conversation, challenges the conventional wisdom that fundamentalism was a reaction to modernism, showing instead that the assumptions of modern capitalism helped to shape a new manifestation of Protestant evangelicalism. Gloege’s revisionist work genuinely advances our understanding of this religious movement, and going forward his work will need to be consulted by all scholars of Protestantism in the Gilded Age and the Progressive Era.

My own questions about Gloege’s work are largely bound up with his methodology, which seeks to interrogate the unexamined assumptions of his subjects. This outsider critique, which refuses to privilege (or at least to be content with) self-definition and self-perception, often proves illuminating. But there are times when one can ask whether the paradigm is overwhelming the evidence. Two examples will have to suffice. One walks away from Gloege’s book with the clear idea that evangelicals like Torrey read the Bible as a “contract,” even though he cites no examples of this actual terminology and seems to conflate the concept of contract (a business concept) and covenant (a biblical concept). It’s not always clear when Gloege is inferring and when he is reporting. One would likely also conclude from this work that fundamentalists bypassed denominations altogether on account of their individualistic-consumerist paradigm, but then would be hard-pressed to explain why northern evangelical Protestants frequently compromised in order to operate within their denominations. (See J. Michael Utzinger, Yet Saints Their Watch Are Keeping: Fundamentalists, Modernist, and the Development of Evangelical Ecclesiology, 1887–1937 [Macon, GA: Mercer University Press, 2006]). At the end of the day, readers from a more “evangelical orientation” will surely profit from the provocative conclusions of a scholar who seems to assume a more “churchly orientation,” even as they might be more willing, at certain points, to empathize with the key players and discern a wider swath of motives and more nuance in this complicated story.

These methodological questions aside, Gloege has produced a fascinating work. He represents a growing generation of well-informed scholars who are challenging the prevailing assumptions about the history of evangelicalism in America. His work serves as a reminder that all religions—even those that claim to be “old-time religion”—are shaped by a cultural milieu, often unknowingly, and their assumptions must be studied and interrogated afresh.