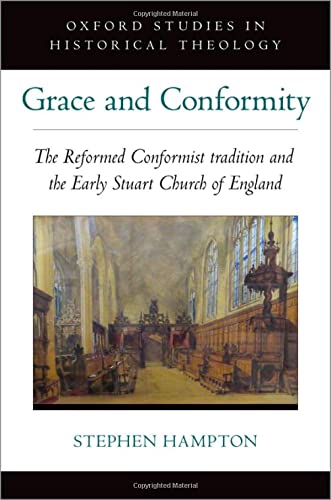 Grace and Conformity: The Reformed Conformist Tradition and the Early Stuart Church of England

Scholarly study of early modern English theological and ecclesiastical identities has progressed enormously in recent decades with new terms such as “moderate puritan” and “avant-garde conformist” becoming part of a growing historical vocabulary that facilitates more nuanced discussions of the complex and overlapping array of positions evident in the period. Hampton’s study represents a significant contribution to this historical conversation by identifying a distinct and significant early-Stuart theological and ecclesiastical identity, namely “Reformed Conformism.” This party was “neither Puritans nor Laudian” (p. 24) in that it held Reformed theological convictions with respect to the doctrines of grace yet combined them with what might be described as “high church” ecclesiology. That is, they not only rejected the Presbyterian (Puritan) critique of established English ecclesiastical polity and liturgy, but they also moved beyond moderate Puritanism’s merely reluctant acceptance of this ecclesiastical status quo, making selective use of late-Elizabethan avant-garde conformist thought (esp. Richard Hooker) to argue that England’s approach to such “things indifferent” (adiaphora) had positive spiritual value. Here was a group of decidedly Reformed clergy who championed episcopal polity, established liturgy, and ceremonial piety (along with a positive disposition toward church aesthetics and sacred space) whilst championing the same account of the doctrines of the grace that historians typically associate with Puritanism. With respect to ecclesiology, whereas Puritans made the church center on preaching and Laudians made it center on liturgical prayer, Reformed Conformists envisaged a church that emphasized both.

Hampton’s study focuses on ten figures representing the Reformed conformist position, namely John Prideaux (1578–1650), Joseph Hall (1574–1656), Daniel Featley (1582–1645), Thomas Morton (1564–1659), Samuel Ward (1572–1643), George Downame (c.1566–1634), John Davenant (1572–1641), George Carleton (1559–1628), John Williams (1582–1650), and Richard Holdsworth (1590–1649). The breadth of Hampton’s selection of representative figures, as well as their evident collaboration, justifies the contention that they represent a broad position that can neither be accommodated to the typical Puritan-Laudian options nor marginalized as idiosyncratic. Indeed, Hampton demonstrates that Reformed Conformists were central players in the key religious disputes of the early-Stuart period.

Chapters 1 to 5 highlight the Reformed Conformist commitment to the Reformed doctrines of grace as well as their prominence in the promulgation and defence of these doctrines. Chapter 1 examines John Prideaux’s Act Lectures at Oxford University (1616–1624) as representative of Reformed conformist thought on grace. There, Prideaux offered nuanced Reformed accounts of the absoluteness of God’s decree of reprobation, effectual grace, conversion, justification, assurance, and perseverance of the saints, whilst emphasizing that the church was where the means of grace were to be found. Chapter 2 focuses on the English delegation to the Synod of Dort (1618–1619) which initially consisted entirely of Reformed Conformists (Carleton, Hall, Davenant, and Ward). This group exhibited some theological diversity of views, for example regarding the extent of the atonement, yet foregrounded that the atonement was intended for the elect. Chapter 3 examines the responses of Prideaux, Featley, Ward, Carleton, and Hall to the notoriously “Arminian” tracts of Richard Montagu which challenged the Reformed doctrines of grace. Here Reformed Conformists took the lead in demonstrating that the Church of England held to Reformed theology. Chapters 4–5 highlight Reformed Conformist teaching on grace in the aftermath of the 1626 Proclamation which sought to end these disputes on grace, but which was also used to silence Reformed views. Hampton highlights the efforts of Ward and Davenant to ensure that the Reformed doctrines of grace and of justification continued to be propounded in Cambridge University and in publications flowing from her printing press.

Chapters 6 to 8 turn to the ecclesiological aspect of Reformed Reformist identity, and particularly its opposition to Laudian innovations. Chapter 6 discusses Reformed Conformist opposition to Laudian eucharistic innovations which sought to rehabilitate language of “altar” and “sacrifice.” Williams and Morton took the lead in demonstrating that these practices represented a decisive departure from the teaching of the English confession. Chapter 7 examines Reformed Conformism’s distinct commitment to episcopacy as the divinely ordained form of church government, arguing that the practice was grounded in Apostolic succession. Here, Reformed Conformists took a critical stance toward other national Reformed churches, asserting that other ecclesiastical polities diverged from God’s ordinance. Finally, chapter 8 describes the Reformed Conformist defense of the English liturgy, including its liturgical calendar of festivals and saint’s days, as giving positive expression and support to decidedly Reformed piety. Much that is distinctive of the Reformed Conformist position is summed up by their representation of the Church of England at the Synod of Dordt, where they not only concurred with the assembly’s condemnation of Arminianism but took the opportunity to argue that episcopacy was God’s ordinance and that all Reformed churches had freedom to institute whatever religious ceremonies they believed would edify their populace.

Hampton’s study will likely establish itself as a standard work in a growing body of literature which recognizes the continuity of a distinctly Reformed Anglican tradition through the seventeenth and eighteenth centuries. (Hampton’s earlier study, Anti-Arminians: The Anglican Reformed Tradition from Charles II to George I [Oxford: Oxford University Press, 2008], ought to be consulted for the later end of this period). It notably makes the argument of a range of Latin language and manuscript sources available to a wider audience. Students of Reformed historical theology cannot afford to ignore this work. It will likewise be of particular interest to modern Anglicans who seek to benefit from the Reformed theological riches of their own tradition, and access to rich historical examples of reflection on how Anglicanism’s distinct churchmanship may stand in positive relation to matters of Reformed theology and piety.

Hampton highlights that his study could be expanded to consider other figures, including James Ussher and Robert Sanderson. It could also be supplemented with respect to the formative influences upon this group of theologians. This reader, for example, detected more of the influence of William Perkins upon the thought of various of these figures than Hampton’s study indicates. It is also regrettable that the present work was released contemporaneously with Michael Lynch’s focused study, John Davenant’s Hypothetical Universalism: A Defense of Catholic and Reformed Orthodoxy (Oxford: Oxford University Press, 2021). Lynch’s work might have enriched and clarified Hampton’s discussion of that theme in Davenant (cf. pp. 99–106). Nevertheless, Hampton’s wide-ranging study convincingly establishes Reformed Conformism as a distinct and highly significant early-Stuart party and offers the reader a compelling entry-point into their thought.