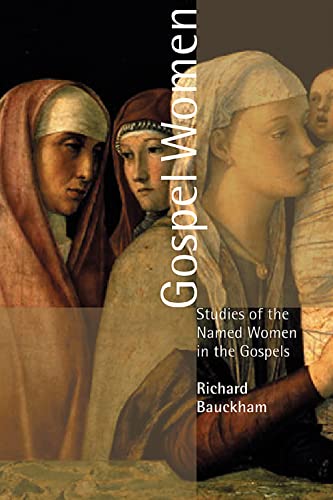 GOSPEL WOMEN: STUDIES OF THE NAMED WOMEN IN THE GOSPELS

The scope of this book is broader than the title suggests in that the first section is about the OT; narrower, in that it does not treat all the named women of the gospels, but only those who have not been fully studied elsewhere, or about whom Bauckham has something fresh to say. A concluding chapter assesses the credibility of the testimony of the various women who witnessed the Resurrection. Bauckham brings to these subjects the perspective of over two decades of feminist study by a whole host of scholars, and his own encyclopedic knowledge of ancient Judaism.

The first chapter is self-Consciously feminist in perspective, and the conclusion (that the book Ruth functions as a gynocentric text that acts as a corrective to the other predominantly androcentric texts of Scripture) is unsurprising. The second chapter is a detailed discussion of the Gentile foremothers of the Messiah. Far more interesting is the third chapter on Elizabeth and Mary, the mother of Jesus, which uses intertextual interpretation to open up Luke 1:5–80 in a fresh way. Bauckham gives an exhaustive list of parallels between Mary and other women significant in the redemption of God’s people. He shows that Mary’s own lowly status mirrored that of the Messiah, and also that of previous deliverers of God’s people, including female deliverers.

Perhaps the most enlightening chapter is that on Anna. Her background is usually skipped over, but Bauckham argues convincingly that her membership of the tribe of Asher was highly significant. He shows that there was probably a close ‘connection between Anna’s membership of a northern Israelite tribe, her temple-centered piety, and her association with those who were looking for the redemption of Jerusalem’ (98).

Most surprising is the chapter on Joanna. Bauckham suggests—plausibly—that Joanna and Junia (of Rom. 16) are one and the same person (the names are sound equivalents in Hebrew and Latin). He builds up a convincing reconstruction of Joanna’s life, which is worthy of careful consideration. Along the way he gives a detailed response to the most recent scholarly arguments against Junia’s apostleship. Bauckham discusses at length the probability of husband and wife teams engaging in missionary work; the possibility of Andronicus and Junia being one of these husband-wife teams, and the likelihood of their being named as apostles in a broad sense of the word (cf. 188). The chapter on Mary of Clopas also discusses evidence from the early church period for husband-wife teams engaged in evangelism (214–17). The arguments are balanced and faithful to the text, as well as to the historical context. Given that many complementarians allow that women and men equally should be engaged in evangelism and mission, Bauckham’s case should at least be given a fair hearing by those on both sides of the gender debate.

Thoroughly researched, carefully argued and at points fascinating, this book will be useful to students of the Gospels, NT Background, and those studying women in the Bible.