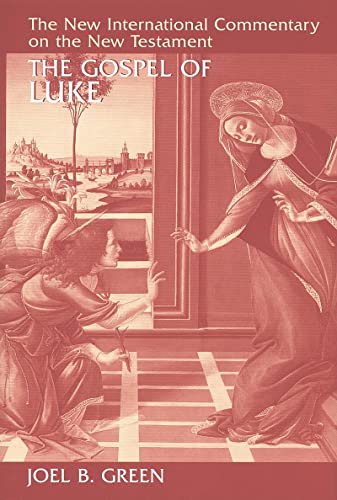 Commentaries on the Gospel of Luke have seen a reversal of fortune in the last quarter century. There was a time in the seventies when one had to go back forty years to find a good commentary. Now we are flooded with a depth of riches. One might think it would be impossible for anything fresh to be said. Yet this commentary by the professor of New Testament at Asbury Theological Seminary is a solid contribution to Lucan study. Green has chosen to examine the gospel from the perspective of a literary reading of the gospel. This choice allows him to highlight the text and stay focused on issues it directly raises. This perspective, along with the sociological insights he brings to the study, is the strength of this commentary.

Green knows Lucan studies and the discussion of Lucan issues. He argues that Luke’s story is ultimately about God’s acts through the ministry of Jesus. He is sensitive to Luke’s close connection to Acts and often notes how the gospel’s story is developed in Luke’s second volume. He is careful about how Luke develops the christological portrait of Jesus, moving carefully from the basic portrait of Jesus as Messiah and prophet to a deeper understanding as the story moves into Acts. For Green, the gospel details how Jesus engaged in a ministry of release in fulfilment of promise and how Jesus is particularly concerned with the plight of the marginal. Jesus’ healing and ministry of exorcism indicated that he was engaged in a great cosmic conflict with the forces of evil. Jesus sought to reverse the cultural expectations in relationships. The culture focused on reciprocity and was concerned to make sure those of status were honoured and those who lacked it were ignored. Jesus sought a new way of relating. Luke also details how Jesus came to be opposed by the leadership of the nation, as well as how Jesus called his disciples to a demanding discipleship. All of these emphases are on the mark.

Green does not merely repeat traditional views. His readings of the parables in particular are fresh, containing many distinct approaches that are fuelled by his literary perspective. Though not all of these details of interpretation were convincing to this reviewer, the readings were often worthy of consideration and often yielded helpful reflection about what was really happening in the passage. There is much of great value in Green’s study.

What are the commentary’s limitations? With the choice to focus exclusively on a literary reading. Green accepted certain limitations. If one wishes to understand how Luke relates to the other synoptic gospels as it tells Jesus’ story, then this study will not be of help. Often Green fails to treat or develop points of intense debate in Lucan exegetical study that surround Luke’s presentation as a historian. Part of the reason for this omission is that the interpretive tension emerges from Luke’s relationship to the other Gospels. Green consistently stays out of these discussions as a point of method. This emphasis is signalled in the introduction when the issue of authorship is handled in one page, failing entirely to raise elements that are a part of this discussion from the church tradition or even options for dating. Such discussions are treated as if they are not very relevant to understanding the Gospel more precisely and are incompatible with a literary reading. This defines ‘literary reading’ in a very narrow and extremely formal manner. Green will introduce issues of sociological observation, however. This may indicate a little inconsistency in his approach.

In justifying a strictly literary reading, Green seems to downplay the significance of historical reality and setting for Luke. Green highlights the evangelist’s emphasis on ‘interpretive persuasion—that is, not with validation of events but their signification’ (pt. 2, 19 and particularly 20). Though he does not dismiss history as entirely as this quote might initially suggest, it is not clear by his handling of the text how he addresses their connection. This kind of play of interpretation or signification against historicity seems ill-advised, arguing for a separation of relationship that more likely should be read as connected, giving Theophilus ‘certainty’ about what he has been taught in the fulfilled events surrounding Jesus (Lk 1:1–4). Granted Luke is not a chronicle of a modern sort (19, n. 62), but neither does that mean that interpreters should ignore this other dimension quite as much as Green does. The decision is acknowledged in the introduction and reflects a consistent direction in Green’s approach. He cannot be failed for not attempting to do something he feels is not required by this approach. Nevertheless, it is appropriate to point out how this decision surfaces significant, inherent limitations in the literary reading approach (just as an exclusive focus on historical questions also introduces interpretive limitations).

Similarly, the commentary stays focused on Green’s reading and his justification for that particular view. Frequently he does not engage the larger interpretative debates or options in any detail. For example, a discussion of the major dispute over kingdom of God in Luke 11:20 is entirely lacking and the dispute over how to render ‘your sons’ in 11:19 is handled in one footnote without a complete discussion of the options. When these disputes are surfaced, Green is often content to let them be noted by bibliographic references in the notes with no detail about how the cited works relate to the debate. Sometimes, even in central texts, the fact that the issue is much debated is not indicated at all (e.g., does Luke really view all Lucan healings as demonic in all cases on the basis of Luke 4:16b–20 (212)? See the counter argument in C. Tuckett, ‘Luke 4, Isaiah, and Q’, in J. Delobel (ed.) LOGIA, Les Paroles de Jesus—The Sayings of Jesus, BETL 59, (Leuven: Leuven University Press and Peeters, 1982), 343–54). On the other hand, the resources Green does cite are up-to-date and among the best available. Unfortunately, only those who pursue these references or who already know the area will appreciate how well Green’s notes supplement his treatment. When occasionally Green does choose to engage in historical detail, the remarks are quite insightful (e.g. 85, n. 14).

Green is also ambiguous on one important point of Lucan theology. He expresses a less than certain position about how Luke regards the future of Israel (e.g. 739). In discussing the ‘times of the Gentiles’, he notes that the term gives an indication of a temporary period and cites Acts 1:6–8 as leaving the question unanswered. Yet a reading of Acts to 3:18–26 shows that the ‘rest of the story’ of Israel’s hope can be found by reading about ‘the establishing of all God spoke by the mouth of his prophets of old’ (21). This suggests that notes of hope for national Israel from the OT are still a key element in Lucan hope.

Other minor observations can be made. Applications have to be sifted out, as there is no conscious effort to point them out. Sometimes the technical literary jargon obscures the clarity of the point being made (e.g. the term ‘co-text’ is used frequently, though it is defined in the introduction). These features will make parts of the study harder going for pastors or serious lay people.

In sum, this is a fine commentary and a unique contribution to Lucan studies for its focus on the literary reading of Luke. For this concern, this commentary has no equal. On the other hand, there are key issues relating to Luke that do not get sufficiently treated as a result of this focus. Those who want discussion on these other, important questions will need to supplement Green’s study with one of the other full studies on Luke.