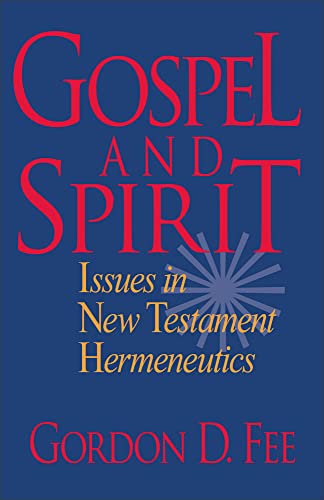 Gordon Fee, Professor of New Testament at Regent College, Vancouver, is a Pentecostal who combines passion and careful scholarship. He has recently become more widely known through his excellent lay introduction to hermeneutics (How to Read the Bible for All Its Worth (with Douglas Stuart, Zondervan, 1982)), and through his well-respected commentary on 1 Corinthians (NICNT), one of the best in the series.

This book consists of eight essays (previously published separately) addressing, on the one side, a strident fundamentalist evangelicalism (e.g. Harold Lindsell, whose particular defence of some biblical ‘problems’ Fee believes to have abandoned the very ‘common sense’ Lindsell pleads for), and, on the other side, a Pentecostalism that Fee believes has often been hermeneutically inconsistent, which has wrongly emphasized baptism in Spirit as a subsequent (second blessing) experience, and which has drifted from its more egalitarian roots to become ‘a denomination of clerics, second only to Roman Catholicism; and, unfortunately, … a denomination of white, male clerics’ (p. xi; issues faced in chapters 4 and 8 especially). Evidently the collection aims to be (and is) robustly stimulating.

The first chapter, ‘Hermeneutics and Common Sense’, is basically the forerunner of his chapters on hermeneutics of the epistles in the volume he co-authored with Stuart. He is thoroughly realistic about how steep and demanding the ridge is that leads from what Paul meant yesterday to what his writings mean for today; and that the walker must constantly avoid the sheer drops of liberalism on the left, and canonization of first-century culture on the right. The criteria for safe passage offered by Fee are entirely sane, and should be read each Friday before writing sermons the next day. And he correctly perceives that most of the agenda behind the debate about inerrancy is less about Scripture, and much more about how it is (or should be) interpreted.

Chapter 2 seeks an evangelical hermeneutics that recognizes that the authority of Scripture is fundamentally extrinsic (in God, not our subjective reading), and yet, because that Word is given through men in history, ‘has locked into it a degree of ambiguity, accommodation, and diversity’, the uncertainties of which tend to push some to the despair of a docetist fundamentalism and others to mute muttering of liberalism. Fee (rightly in our view) opts ‘to hold on to both realities—its eternality and historical particularity—with equal vigor’ (p. 35). If the price is the apparent loss of ‘absolute certainty’ of meaning and application (which we never had), we must not pretend this slips into nihilism; a high level of common understanding is theoretically and practically possible.

Chapter 3 examines the extent to which authorial intent (rediscovered by painstaking exegesis) is normative, and explores it as a safeguard against a rigid evangelicalism that (a) picks and chooses proof-texts from and for its own agenda rather than listening carefully to what the biblical authors wished to convey, and (b) turns NT imperatives into laws of equal weight, unaware of the different weightings the NT writers give, and too often blind to the divine call to love and reconciliation which they are supposed to embody. Chapter 4 probes the particular case of 1 Timothy 2:8–15, and its use (more often misuse, in Fee’s estimation) by those resisting women’s ministries (and, Fee would add, resisting the Spirit who gifted them!). Some searching points are made here, but it is not the last word on the passage.

Chapter 5 takes up the question, already often touched on, to what extent our ‘exegesis’ is controlled by our ‘tradition’, and in what senses this is good, and in what senses harmful. He is aware that where it is the latter, it is easier to see the log in someone else’s eye, but he also provides paths to freedom for those who think ‘tradition’ is a dirty word.

Chapter 6 examines the use of historical precedent in interpretation, especially the use of Acts as the foundation for Pentecostalism’s claim that post-conversional baptism in Spirit (with tongues as initial evidence) is normative. Without falling into the naïvities of opponents of Pentecostalism (who argue that (e.g.) Luke-Acts is historical, not didactic (NT scholars believe they can write a theology of Luke), and that historical pattern and precedent are not normative (these could be if they could be proved to be part of the Lucan intent)). Fee nevertheless argues that there is insufficient evidence to suggest Luke-Acts makes normative a ‘baptism in Spirit’ separate from and subsequent to conversion. And he deals with the issue more thoroughly in Chapter 7, arguing nonetheless (also rightly in the reviewer’s view) that the experience of power and charismata of the Spirit as described in Acts and 1 Corinthians lies near the centre of the NT message of salvation, and isnormative, even if second-generation Christianity watered this down.

This is not a book of ‘original research’ designed to change scholarship—indeed, Fee’s teasing (but appropriate) challenge is that NT scholarship is often already there—it is the non-Pentecostal/non-charismatic churches that have not really caught up. A stimulating book for church leaders and theological students.