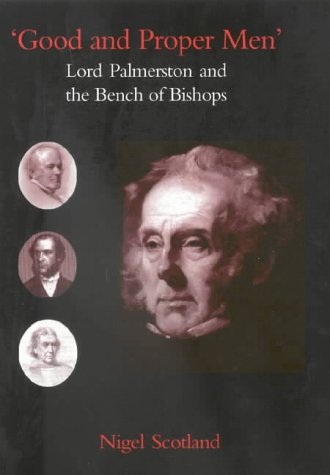 ‘Good and Proper Men’: Lord Palmerston and the Bench of Bishops

There have been two evangelical upsurges in the history of the Church of England; one has been during the second half of the twentieth century; the other was during the last years of the eighteenth century and the first half of the nineteenth. This book by Nigel Scotland, the Field Chair of the School of Theology and Religious Studies at the Cheltenham and Gloucester College of Higher Education, takes as its subject the culmination of the first period, when the Episcopal bench was for the first time crowded with evangelical bishops. In 1860, according to Scotland ten out of the twenty-three English sees were occupied by men of that school. The figure should in fact be eleven, for the author omits one evangelical appointment from 1848, John Graham, bishop of Chester. So nearly half the members of the bench were of that persuasion and several others were in close sympathy with it. This study does not, however, confine itself to the evangelicals. Rather, it takes the groups of fourteen bishops selected or advanced by Lord Palmerston, the Prime Minister from 1857 (with a gap) to 1865 for analysis. The evangelical predominance among them, Scotland confirms, was a result of the influence over the Prime Minister of his stepson-in-law Lord Shaftesbury, the lay leader of the party. They are usually supposed to have been a lightweight set of men, weak in character and administrative ability. But this book reveals that judgement, based as it was upon prejudiced contemporary opinion, to have been wide of the mark. They were, as was to have been expected, orthodox in their teaching and consequently hostile to Essays and Reviews, the manifesto of advanced Broad Churchmen issued in 1860; and they were also notably attached to Protestant principles, the memory of the Reformation and the harassment of ritualists. But equally they were men of scholarly talents, six of them having achieved a first at university. Palmerston may have been averse to appointing theologians (‘The knowledge of mankind’, he once remarked, is ‘not acquired in musty libraries and easy chairs.’), but he was quite willing to choose able classicists. They were, furthermore, men of a new breed. They were not remote aristocratic figures but men of pastoral temperament. Thirteen of the fourteen had parochial experience, they made themselves available to their clergy and they took a keen interest in the people of their dioceses as builders of churches and schools, relievers of the poor and promoters of parish lay workers. They were activists, holding mass confirmations, running missions and trying to raise clerical incomes. They also urged more frequent communion—that is monthly celebrations. Few of them had time for frequent contributions to debate in the House of Lords. The process of ecclesiastical reinvigoration was already well under way, as Scotland rightly recognises by referring to the work of Arthur Burns, but the Palmerston bishops set the style for their successors. In developing this case, the author adopts a wise strategy by dealing with the salient qualities of his subjects as a group. He does not bring out the extent of the erastianism or put Palmerston’s ecclesiastical policies in the wider context provided by David Steele’s Palmerston and Liberalism. Nor does he avoid a few slips and repetitions. But he does establish his case. In the future it will not be possible to criticise this group of bishops, with their evangelical majority, as lacklustre or insignificant.