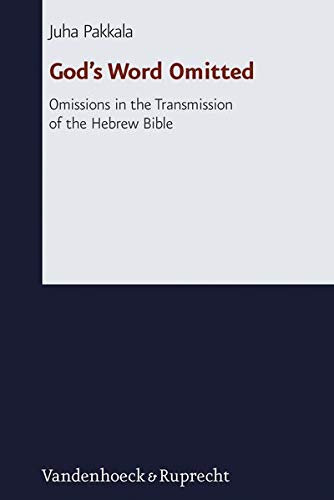 God’s Word Omitted: Omissions in the Transmission of the Hebrew Bible

In order to appreciate and evaluate the monograph by Juha Pakkala, provocatively titled God’s Word Omitted, the development of his methodology and the influences upon his thinking are important to note. Pakkala acknowledges mentors mainly in Munich (R. Müller, C. Levin), Helsinki (A. Aejmelaeus, J. Jokiranta, T. Kauhanen, M. Marttila, M. Nissinen, M. Pajunen and H. von Weissenberg), and Tartu (U. Nõmmik). Consequently, Pakkala is well-schooled in the Literarkritik method which is common among scholars in OT as a result of the Enlightenment. He seeks to combine literary criticism and textual criticism as is now in vogue, in order to respond to the older view that editors of the biblical text only expanded earlier versions of the text. Pakkala’s thesis is that copyists and redactors of the biblical text omitted as well as expanded the text in the process of textual transmission.

The first of eleven chapters discusses ‘several axioms in literary- and redaction-critical investigations’ (p. 89): 1) one can distinguish compositional from redactional stages in the development of texts; 2) texts become holy and normative after being written; 3) the holiness of the text is connected directly to its changeability; 4) every scribe in the transmission had the same conception of the changeability of the text; and 5) the development of the texts was always linear, that is, becoming more conservative. Each of these is challenged based on conclusions from analyses given later in the work.

Nine different case studies sustain the thesis. The first deals with the Samaritan Pentateuch (SP). After commenting on expansions in SP, Pakkala notes a few minor omissions that have major significance. Here a central flaw is that Pakkala does not place SP within a larger metanarrative, where in relation to the proto-MT, the Samaritan Text represents a popularised and updated text before changes related to Samaritan theology were made—whether by addition or omission. Naturally, SP does preserve significant variants in the history of Hebrew textual transmission, but the contribution to Pakkala’s thesis is negligible.

Second, Pakkala devotes just fourteen pages to ‘editorial processes’ in the book of Jeremiah. Comparing MT and LXX, he focuses on additions to the MT in Jeremiah 25:1–14 and an omission in 32:5 (39:5 LXX). The history of the textual transmission of Jeremiah is complicated, however, and no consensus has been reached. The particular cases chosen for examination by Pakkala are disputable rather than being clear, simple, and persuasive.

Third, Pakkala discusses the development of the laws in the Pentateuch. For Pakkala, comparison between the Covenant Code (Exod 21–23) and Deuteronomy as well as the Holiness Code (Lev 17–26) with Deuteronomy raises major questions about the freedom of redactors in the origin of Deuteronomy vis-à-vis similar material in Exodus and Leviticus. Since texts in Deuteronomy are difficult to match up to parallels in Exodus and Leviticus, Pakkala views this as a case where author(s) or redactor(s) exercised extensive freedom to add or omit and reshape earlier laws. Pakkala is so tied to the Literarkritik approach of the nineteenth century that he fails to consider a clear alternative: the same author (i.e. Moses), expanded and reshaped the covenant himself for a new generation of Israel for its life in Canaan. By contrast to this sort of literary criticism which arises from the Enlightenment, a superior approach is to test the claims of the biblical text against contemporary documents from the ancient Near East. Kenneth Kitchen and Paul J. N. Lawrence’s exhaustive analysis of over 1600 pages contains all known covenants, legal treatises, and international treaties from the ancient Near East, from 3000–100 BCE, in both original texts and translations (Treaty, Law, and Covenant in the Ancient Near East [Weisbaden: Harrassowitz Verlag, 2012]). Extensive analysis of these data clearly shows that the literary form of treaties changes over the centuries just like the china we eat from changes fashions over the decades. And the book of Deuteronomy fits perfectly the treaties from the thirteenth century BCE—not those before nor those after.

Fourth, Pakkala turns to a completely different situation, the book of Jubilees. As far as Jubilees is concerned, he correctly notes that ‘the basic underlying reason behind all of the new versions of the law codes and new versions of the pentateuchal texts is the need to update the older texts’ (p. 156). In the case of the Pentateuch, Moses himself needed to update the covenant due to a changed context from Sinai (Exodus) to Canaan’s doorstep (Deuteronomy). He rightly concludes that the author of Jubilees felt the need to update the Pentateuch due to the changed circumstances of Hellenistic Judaism in the second century BCE (p. 166). When he asserts, however, that Jubilees imitates the historical fiction of the Pentateuch, he is imposing his Enlightenment epistemology on the ancient Near Eastern past.

Fifth, a similar situation to Jubilees is that of the Temple Scroll (T). Here Pakkala believes he has found further support for his thesis that authority in texts is not just ‘on or off’, but that there were various levels of authority in regards to earlier texts or to the one a person may himself be writing. Again, this imposes a rationalistic view on the author of T. He does not seem to see that the author of T is re-signifying ancient texts for his contemporary audience and circumstances. In fact, his discussion shows that for the author of T, the Torah was considered authoritative (pp. 177, 180).

Sixth, Pakkala devotes a chapter to selected problems in the history of the transmission of the Hebrew text (e.g., Exod 24:9–11; Deut 13:10; 32:8–9, 43; Josh 24:1, 25, 26; 1 Sam 1–2; 2 Sam 5:21, 24; 6:6–7; 15:9; 2 Kgs 10:23; 12:10; 18:34). Some of the issues are dealt with by topic, as in the chapter ‘Can God Be Seen?’ which examines a number of passages scattered through the Old Testament. Much of Pakkala’s treatment is problematic here, as the following examples will demonstrate. For example, even if we accept his argument for בני אלוהים or בני אל as the original reading in Deut 32:7–8, why must the text imply that YHWH is a different god from El Elyon (pp. 186–187)? Pakkala’s conclusion appears to be a non sequitur imposed on the text by modernistic thinking which does not fit the pattern of literature that we see in the ancient Near East. In Ugaritic literature, for example, the same deity is called by different names in the same text. Why discuss this problem when it does not entail an omission, but rather a variant reading? Again, in Pakkala’s discussion of ‘Can God Be Seen?’ no mention is made of the magnum opus by Carmel McCarthy on the scribal corrections known as Tiqqune Sopherim (The Tiqqune Sopherim and Other Theological Corrections in the Masoretic Text of the Old Testament, OBO 36 (Freiburg: Universitätsverlag, 1981). And these are corrections, not normally omissions. It is well-known, moreover, that the text of Samuel is preserved poorly in the Masoretic tradition. The fact that there could be omissions in the MT is not new to any scholar in textual criticism. Furthermore, since we have no critical edition of the Septuagint, the history of the transmission of the Greek text has not been established scientifically so that claims made about it at this point are speculative. The purpose of Pakkala’s discussions, then, is unclear, for the observation that some omissions have been made for ideological or theological reasons is hardly surprising. Also astonishing is that Pakkala never mentions the major work by Dominique Barthélemy, et. al. (Critique Textuelle de l’ancien Testament, 4 vols. (Fribourg: Vandenhoeck & Ruprecht, 1982–2005]), the most serious treatment by six major scholars of textual criticism, especially when his discussion does not advance beyond theirs.

Seventh, Pakkala analyses Chronicles as a witness to editorial processes. The major problem in treating this text is that he does not consider sufficiently the possibility that the authors of both Kings and of Chronicles drew on identical or similar sources, but presented these events as they wished according to different narrative purposes and plot structures. Thus this case study does not prove anything about editorial practices in the handling or transmission of Scripture.

In the last two case studies, Pakkala treats the problems in 1 Esdras and Esther, respectively. Pakkala is not the first to discuss the relationship of 1 Esdras to 2 Esdras, and both of these to MT, or the relation of the A-Text to the B-Text of Esther, and the relation of these A- and B-Texts to MT. Entire monographs have been devoted to these problems. As I have attempted to demonstrate elsewhere, one of the issues in the second century BCE is whether to transmit a text according to the principle of repetition or resignification (“The Text of the Old Testament,” JETS 52 [2009]: 19–45). Resignification could occur in copying a Hebrew text, in translating a Hebrew text, or in transmitting a Greek translation. So although the problems of Ezra-Nehemiah or Esther in Greek dress are complicated, they do not necessarily support Pakkala’s theory of heavy editorial work on the Hebrew text in Second Temple Judaism.

Pakkala’s final chapter presents his conclusion, namely, that there is a dichotomy in the evidence (i.e. some transmission is linear and straightforward, while some transmission entails radical reshaping of the parent text). He argues that textual development occurs within paradigms and paradigm shifts and wonders whether the evolution is gradual or punctual. He does not consider that the processes of textual transmission categorised on a continuous spectrum from repetition to resignification can deal adequately with the problems. He also sneaks comments on Daniel and Ben Sira into his conclusions when these texts were not discussed earlier.

So what is the contribution of Pakkala’s work? In summary, his claims about radical editorial processes uncovered by literary criticism are unconvincing. Rather, his work inadvertently demonstrates how problematic it is to combine literary criticism and textual criticism. On my part, I have personally examined hundreds of manuscripts as a Septuagint scholar, in addition to manuscripts of the Hebrew Bible. Every manuscript I have seen has additions, omissions, transpositions, and substitutions. Many of these are unintentional, while some are intentional. To focus only on omissions would constitute a flawed methodology, since one does not get a full-orbed picture of the character of a textual witness. In addition, the cases examined by Pakkala are like comparing apples and oranges. What does the rewriting of the Pentateuch in Jubilees have in common with a textual problem in the transmission history of Samuel? Moreover, attempting to treat nine cruces criticorum in one monograph instead of focussing on just one of these is unhelpful in advancing the frontiers of knowledge. And finally, the idea of omissions in scribal transmission is well-known to textual critics. It seems that Pakkala made a false start at the outset of the investigation.

One positive aspect of this work, however, is the recognition of a dichotomy in the cases studied. The fact of omissions may not prove Pakkala’s thesis that authoritative texts are changed by being shortened over time; rather, it illustrates the more demonstrable probability that texts were both repeated and resignified during the Second Temple period.