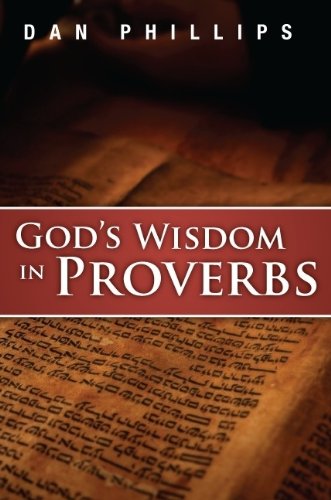 Dan Phillips is pastor of Copperfield Bible Church in Houston, Texas, and he writes regularly with Phil Johnson and Frank Turk at the Pyromaniacs blog. In addition to the volume under review here, Phillips has written The World-Tilting Gospel. Both books come at readers with a deadly seriousness about the gospel and sound doctrine tossed in a breezy light-hearted writing style. The jocular sternness is a jolting combination: Phillips brings a grin to the face then grabs for the throat. He takes the biblical languages seriously too, so while this book does not have an academic feel, it consistently engages the Hebrew text of Proverbs.

God’s Wisdom in Proverbs comes in eight chapters with an epilogue and four appendices. Chapter one presents the essentials for understanding Proverbs: Phillips holds firmly to Solomonic authorship, an issue given twenty pages in appendix one. He interprets Proverbs in harmony with the rest of the Hebrew Bible, and he discusses the book’s structure (relying mainly on the headings), poetry, and parallelism as he orients the reader to the interpretation of the book.

Chapter two is a thirty-page discussion of Prov 1:2–6, and chapter three explores the fear of Yahweh. Chapter four focuses mainly on Prov 2:1–6 on the topic of “how to wise up.” Chapter five exposits the teaching of Proverbs on trusting and knowing God. Chapters six and seven synthesize the teaching of Proverbs on godly relationships and marriage, respectively, and chapter 8 rounds out the body of the book with over sixty pages on the teaching of Proverbs on child-training. In the epilogue Phillips addresses the reader who might feel condemned by the high standards set forth in the book of Proverbs: he urges faith in Christ for justification, explaining how the transforming power of the Spirit to regenerate enables people to live according to the wisdom set forth in Proverbs.

Appendix one deals with Solomonic authorship of Proverbs. Appendix two looks at “words related to teaching in Proverbs”; appendix three is given to the meaning of Prov 22:6, “Train up a child in the way he should go; even when he is old he will not depart from it” (ESV); and appendix four deals with “preaching and teaching the book of Proverbs.”

Appendix three takes the position that Prov 22:6 is a warning, which Phillips translates, “Start out a youth according to his own way—even should he grow old, he will not turn from it.” Phillips shows how the bare Hebrew “his way” is typically translated such that the “way” referenced is the “right” way, but he contends, with Douglas Stuart and others, that this is an unwarranted addition. The defense Phillips provides for his interpretation of this verse, taking it to state that children will be confirmed in and stay in the way they are trained to go, whether that way is good or bad, is clear and compelling.

The teaching of Proverbs is desperately needed today. As our society descends into decadence, this book of the Bible will give us a backbone and help us to stand, and this applies to everything from fearing God to relating appropriately to others and cultivating marriage and training children, to say nothing of sound economic policy. We need no more “explanations” of Proverbs that nullify its teaching or assume it has no connection to its OT context. Rather, we need balanced, studied, serious, joyful, and wise explanation and application of Proverbs. Enter Dan Phillips. This would be a great book for men’s discipleship groups, for a pastor planning to preach through Proverbs, for the recent graduate, and for much else. We can thank Phillips especially for his balanced and courageous presentation of how parents should use the rod for reproof.

Our day is also a day in which some are calling for “crazy” or “radical” expressions of Christianity. These presentations are seldom seasoned with the whole counsel of God: do they take OT wisdom literature into account? Wouldn’t the OT wisdom literature help us to follow Jesus, who taught people to count the cost of doing so? Often the calls to sell all or leave all appeal to younger people, typically college students who have few responsibilities and are unmarried and without children—the very kinds of people for whom Solomon wrote Proverbs. All Christians today need the message of Proverbs, but it was expressly written to make wise the simple. Proverbs remains God’s word for God’s people. As we seek to follow Christ today, we will be wholly committed to Jesus only when we live by the Spirit-inspired wisdom that Solomon writes in Proverbs. Dan Phillips has given us a study that would be a great place to start down the path of acquiring wisdom.