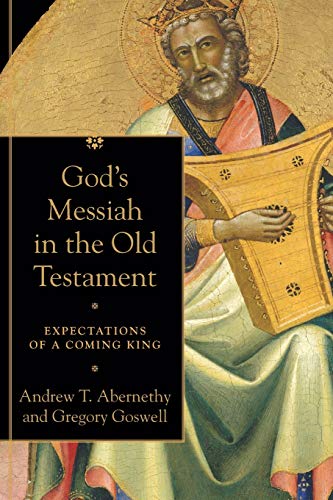 God’s Messiah in the Old Testament

Two accomplished Old Testament scholars, one younger (Abernethy) and one older (Goswell), have teamed up to produce this important book on the Messiah in the OT. This subject “is fundamental to a proper understanding of the faith we profess” (p. 1). Its primary audience is “pastors and students,” without excluding scholars (p. vii). The book is well written and is accessible to a broad audience, with some interaction with biblical languages and modern scholarship, but not so much as to be overwhelming. It is well edited, with only a few mistakes or style issues (e.g., misspellings: “Othneil” on p. 29 and “Evil-Merodoch” on pp. 80, 83; outdated use of “oriental” on p. 5; repetition between pp. 125–26 and pp. 137–38).

After a brief introduction (pp. 1–9), the bulk of the book’s structure (ch. 1–15) adheres to a Hebrew tripartite division of the canon (Law, Prophets, Writings) with the exception of Ruth (see pp. vii–viii), followed by one chapter that discusses “Jesus as the Christ” in the NT (ch. 16). Chapters 1–15 each end with brief “canonical reflections.” The book’s conclusion uses the metaphor of an abstract mosaic to creatively illustrate the authors’ approach. Proportionally, the book’s contents are weighted towards the Prophets (ch. 2–12, pp. 28–181), compared to the Law (only ch. 1, pp. 10–27) and the Writings (ch. 13–15, pp. 182–223). There are several chapters with varying amounts of content based on previously published material, whether Abernethy’s (ch. 6) or Goswell’s (chs. 3, 8–14).

Abernethy and Goswell understand “Messiah” and “messianism” in terms of “the hope of the coming of a royal agent who will serve God’s kingdom purposes, an expectation that Christians believe finds fulfillment in Jesus Christ” (p. 1). As such, their approach sees the kingship of God as “central” (p. 5) with human messianic kingship in a subordinate role (pp. 33, 50–51, 156, 183, 193, 239). Relatedly, “a messianic passage or book … is one in which this royal figure is prefigured, anticipated, predicted, or described” (p. 1). Based on these definitions, the authors’ discussion of these texts does not necessarily involve eschatology or an individual Messiah specifically (pp. 23, 52, 110–13; though see pp. 134, 184).

A large proportion of the book involves either measured treatments of classic messianic passages or constructive exegesis of other relevant texts. Regarding the former, the authors interpret the seed of the woman in Genesis 3:15 collectively as humanity (p. 13), the promise to Judah in Genesis 49:8–12 as either about an individual or a dynasty (p. 19), the star of Jacob in Numbers 24:17 as either an individual or an ideal (p. 23) and 2 Samuel 7:14 as concerning a metaphorical father-son relationship between God and David’s offspring rather than a prophecy about Jesus (p. 62). Regarding the latter, Deuteronomy 17:14–20 presents “an ideal through which future kings would be assessed” (p. 25), Judges “advocates for a kingship” that lives up to this ideal (p. 34), Ruth has important Davidic connections (p. 37), David’s triumphs in Samuel provide a “messianic picture” (p. 56) of an “ideal king” (p. 63), and Kings also brings out “the ideal of kingship” (p. 67).

For brevity’s sake, I must conclude my summary in hope that the preceding fairly represents the book. As a former student of John Sailhamer, I am grateful that Abernethy and Goswell chose to interact with his view of the Messiah in the OT (pp. 20–21), which is both significant in itself and still influential in some evangelical circles (e.g., Michael Rydelnik and Edwin Blum, eds., The Moody Handbook of Messianic Prophecy [Chicago: Moody, 2019]). At the same time, I wish that the critical interaction showed a deeper understanding of and engagement with Sailhamer’s proposal involving the eschatological-messianic message of the Pentateuch’s major poems (Gen 49; Num 24; Deut 32–33). Their critique relies on agreement with other scholars and posing questions that reflect personal skepticism, which are secondary to the primary methodological and exegetical issues themselves. Some of these primary issues logically precede the interpretation of the disputed Deuteronomy 33:7. Neither is there sufficient acknowledgment of the textual evidence Sailhamer provides for relating these major poems together, first for the macrostructure of the Pentateuch and then intertextually.