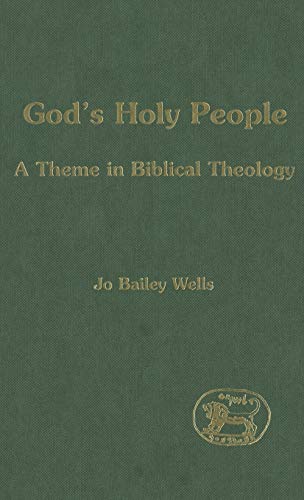 ‘This book addresses two questions. The first and major question is: What does “holiness” mean, according to its presentation in various parts of Scripture? The second, subsidiary question is: What do the varying dynamics in the presentation of holiness say about a Christian reading of Scripture, and vice versa?’ (13). These opening questions overarch this study, a published version of a thesis supervised by Walter Moberly in Durham. Since these issues are of vital importance to Christians, and Moberly is attempting to break new ground in Biblical Theology, the book’s content and methodology are of wider interest than many a published thesis.

The starting-point is the call to Israel at Sinai in Exodus 19:6 to be YHWH’s treasured possession, a priestly kingdom and a holy nation. Chapter 1 examines this foundational text, while Chapters 2 and 3 probe the concepts of holiness and priesthood in the Torah more deeply. Chapters 4 and 5 take the reader into the prophets who deal most explicitly with holiness, i.e. Isaiah and Ezekiel. Chapter 6 steps back to Genesis to examine Abram as the prototype of Israel. Chapter 7 then considers the way in which 1 Peter 2 re-interprets election, priesthood and holiness in the light of Christ. And a slim concluding chapter 8 re-examines holiness in general and Exodus 19:6 in particular.

What is attempted is neither a systematic theology of holiness nor a biblical survey of the historical development of holiness. This sets out its stall to be a Biblical Theology. The starting-point methodologically is the lexical occurrence of the Hebrew word for holiness, qodesh, in the Scriptures. The rival etymologies often touted for this word-group, ‘separateness’ or ‘brightness’, are ignored in favour of study of their usage in context. In light of James Barr’s strictures against the older Biblical Theology movement, this is to be commended. The other shaping influence in operation here is the canonical approach associated with Brevard Childs. This entails a couple of significant elements. Firstly, particular attention is paid to the final form of the canonical text. Secondly, the history of the tradition of interpretation within the faith-community is important, because it gives a depth dimension to the final form. The specific challenge of Biblical Theology is to listen to the OT ‘as a discrete Jewish voice’ (22), to listen to the NT with particular attention to its dependence on the Septuagint, and then ‘to re-read the parts in the light of the whole’ (22). The challenge of holding together different voices in an integrated canon is expressed thus: ‘The differing parts of the canon have to be heard together, and to be held in creative tension’ (23). Childs has sometimes been criticised for failing to deliver the exegetical goods to match up to his theories. Wells sets out less to defend the theories than to test them exegetically in search of a Biblical Theology of holiness. How well does she succeed?

Each chapter contains careful exegesis which takes account of context, grammar, genre, poetics and such like. Sometimes a personal opinion is ventured which bucks the main trends of critical scholarship. Thus, for example, in Exodus 19 an interpretation is offered which depends on punctuating v. 5 differently from the Massoretic Text. Helpfully, each chapter ends with a summary of the theological gains won by the exegesis. The theological first fruits of Exodus 19:6 are presented simply and clearly in support of statements such as ‘Israel is unique’, ‘Israel belongs to God’, Israel must live for God’, and ‘Israel must live for others’.

I was interested and somewhat surprised to see a consistent pattern emerge throughout the OT exegesis, which, perhaps counter-intuitively, minimises the missionary thrust of Israel’s calling to be a priestly kingdom and holy nation. This is confirmed retrospectively by the reflexive interpretation of Genesis 12:3b, that the nations will wish themselves to be as blessed as Abraham was, rather than that they will all be blessed through him. 1 Peter 2 is then portrayed as taking up the concepts of election, priesthood and holiness and imbuing them with a fresh new missionary purpose. The concluding step in the whole enterprise permits one to go back to the more exclusivistic OT texts and discover that because of the openness within their language and imagery they are in fact amenable to a Christian re-reading. This is no abuse of OT texts, because ‘the new meaning is evident within the old meaning’ (245).

If I have any reservations, they are as follows:

One, many narrative approaches build on Childs’ preference for the final form of the biblical text by elaborating ways in which texts and stories create an imaginative world and draw the reader into it. Not so here. The persistent reminders throughout this book of the history of the tradition of interpretation place a series of redactors between the text and the world it evokes. My ideal Biblical Theology would probably require a slight reining in of the analytical faculty in order to facilitate a little more imagination, creativity and spiritual application than finds expression here.

Two, the choice to make holiness-vocabulary a determining factor in selection of texts revealed a disconcerting consequence. It virtually excluded consideration of the gospels, since, as was freely admitted, such vocabulary hardly exists in the gospels. But surely a methodology which marginalises the gospels and thereby the primary witness to Jesus Christ is open to serious question. I should have thought that for both hermeneutics and Biblical Theology Christ is the ultimate touchstone for revealed truth.

Three, I am not sure that at the end of such painstaking labour the contemporary church has anything new to get its teeth into with respect to the call to holiness.

While in certain respects this is not how I personally approach the task of Biblical Theology, I commend it to others for serious consideration. And I wholly endorse the sentiments expressed in the preface about holiness being both God’s gift and God’s challenge to a community and about the Church’s need for both.