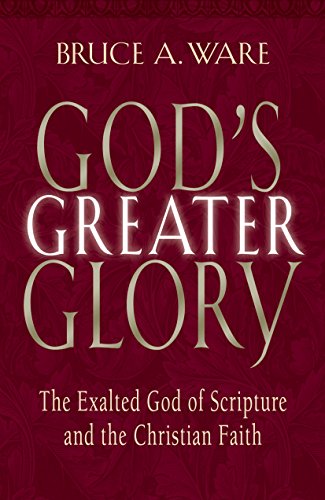 GOD’S GREATER GLORY: THE EXALTED GOD OF SCRIPTURE AND THE CHRISTIAN FAITH

This book is a follow-on from Bruce Ware’s previous book ‘God’s Lesser Glory: A Critique of Open Theism’. As the titles indicate the previous book critiqued open theism, whereas the current book looks at the same ground but from a positive point of view. It attempts firstly to give a defence of the traditional reformed position on God’s sovereignty in providence and secondly to present the implications for the Christian life.

The first section presents a helpful and clear overview of the reformed position of providence. Ware argues for an approach that takes into account both divine transcendence and imminence. Many errors in formulating God’s relationship with his creatures have focused on one of these to the exclusion of the other. Ware tries to hold both together and allow God to describe the resulting relationship. He acknowledges that on occasion in classical theism positions on these topics have not taken into account the full sweep of Biblical data on the issue and he presents a more carefully nuanced account.

In discussing human freedom he overviews the usual positions of freedom of indifference and freedom of spontaneity, arguing for the latter. He moves to describe the nature of providence and opts for a reformed version of middle knowledge. While this is plausible it runs the risk of going against Ware’s stated approach. That is, it inevitably drifts far from the explicit statements of Scripture and at times could be accused of elevating one strand of the Biblical data over another.

Within the book there are interactions with both Arminian and open theist positions, but the focus is on a positive presentation rather than critique. There is an appendix providing a critique of open theism in particular (which is a previously published paper).

Overall this is a very helpful and well written presentation of the reformed position on providence and the Christian life. Its breadth means it does not break much new ground for those who are familiar with the area, but it is far more than a brief introduction.

Graham Beynon is pastor of Grace Church in Cambridge, UK and director of independent ministry training at Oak Hill Theological College in London.