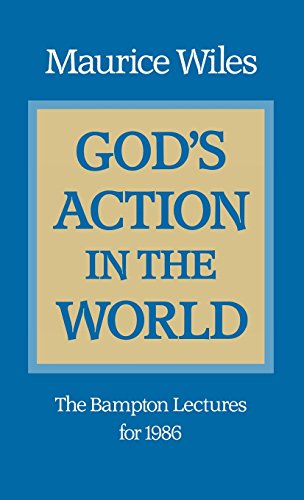 God’s Action in the World

In 1974 Professor Wiles’s Remaking of Christian Doctrine set out a theology closely resembling 18th-century deism, though less agressively confident: God creates the world, but does not intervene in it. This is a follow-up, restating Wiles’s position. To some extent it is a defence against other views (not only traditional orthodoxy; he has process theologians in mind too), but for most of the book Wiles takes his position for granted and is amplifying rather than defending.

Generally speaking, he holds that where Christians have spoken of divine action in particular events, they have either been mistaken (as with most miracle-stories) or, more often, should ideally have spoken of these events as specially fulfilling God’s purpose. We see, after the event, that the life of Jesus or the conversion of Paul were of immense significance in this fulfilment; and we describe them as divine acts of incarnation or of calling, though really they are but part of the one inclusive act of creation.

The book adds little to what Wiles has already said, and it is not always easy to follow his reasoning. He tends to raise a point, digress into related matters, and then return to the original point, a method probably more suited to lecturing (the book is the text of the Bampton Lectures for 1986) than to reading.

He is probably on his strongest ground in ch. 6, ‘Providence and Personal Life’. Elsewhere his only real arguments for his position are that the world seems orderly and that it is hard to identify the places of God’s activity. But here he has another—the apparent arbitrariness of God’s dealings with mankind. Why do many die in infancy, or without hearing the gospel, if God is acting freely in human lives? This is a strong point, though Wiles (perhaps because he is amplifying rather than defending, perhaps because of the constraints of the lecture form) hardly deals at all with the efforts Christian theologians have made to meet the point, which is not of course new.

God, according to Wiles (and to many who are more orthodox), respects human freedom. But Wiles seems unable to imagine any position in between complete refusal to intervene in our world and the destruction of freedom. God cannot, for instance, suggest the restoration of Israel to Cyrus without becoming ‘the all-controlling God who does not respect the freedom of the world he has created’ (p. 62). Surely, one feels, this is exaggeration? Even the freedom of this one act need not have been compromised (cf. Est. 4:14); and supposing it was, Cyrus’ normal liberty was unaffected—and other people’s too. Indeed, one might feel tempted to stand Wiles’s argument on its head. If God has purposes for the world (as Wiles agrees he has), is it possible for him to fulfil them without intervening, except by a total predetermination of the entire process, a predetermination which Wiles rejects for both theological and scientific reasons?

There are a number of places where defects in Wiles’s deism seem particularly obvious, yet not to him. For instance, on p. 35 he considers two models for God’s relationship to the world: that which sees God as the potter and the world as the clay, and that which sees God as the soul and the world as his body. Both, he suggests, point to his own position: the potter simply endows the clay with distinctive properties, and the soul is not continually maintaining the pumping of the heart. Yet Jeremiah uses the ‘clay’ model precisely to say that God does intervene (Je. 18:1–11), and our souls are hardly passive spectators of most of our lives in the way they are of the heartbeat.

More serious perhaps, because symptomatic of the really fatal weakness in Wiles’s whole position, is his handling of the resurrection (pp. 90–92). He is right to say that Jesus could conquer death without needing the empty tomb or the resurrection appearances. But if these never took place, or had natural explanations, we have no reason to believe that Jesus did conquer death. A ‘resurrection’ might be possible, but not the only resurrection we have evidence for. And this problem over evidence applies to the whole of Wiles’s new deism. What reason have we to believe that God has any purposes for us, and what evidence for what they are? The old deists believed in natural theology: reason could prove that God existed, and was good. But Wiles lacks this confidence. His belief in God’s purposes, and his identification of them, are simply watered down from the biblical view of God which he rejects. Christians believe God has revealed his purposes to us. Wiles does not. Nor does he appeal to natural theology. Why then does he believe even what he retains?

A model for theological students?

‘Who is the prophet talking about?’ Some reflections on the New Testament’s use of the Old

The priority of Jesus: a look at the place of Jesus’ teaching and example in Christian ethics

Conversion: a comparison of Calvin and Spener

Towards an analysis of cult

The World of the Bible

God and His People, Covenant and Theology in the Old Testament

Ancient Judaism—Biblical Criticism from Max Weber to the Present

Paul, Judaism and the Gentiles. A Sociological Approach

Reviewed by John Barclay
New Testament
VIEW ALL VIEW ALL