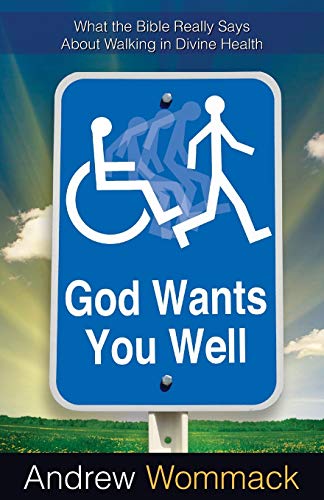 God Wants You Well: What the Bible Really Says about Walking in Divine Health

Andrew Wommack’s new book God Wants You Well is a deeply flawed and pastorally dangerous book. Unfortunately, the brand of theology it represents is hugely popular and influential. Pastors should be aware of this theology and able to offer informed biblical responses to it. The title of Wommack’s book conveys his basic thesis: God’s will is that no Christian suffer physical illness or poverty. It is always God’s will for Christians to be well. Wommack never clearly explains what he means when he says that God ‘wants’ believers well, but he seems to mean more than the basic claim that God doesn’t intrinsically enjoy the sickness and suffering of his people (a claim with which all Christians would agree). Wommack means that God never purposes anything other than the physical and financial well-being of his people. According to Wommack, it is ‘false teaching’ to claim that ‘God is the One who causes people to die’ or to say that God ‘puts sickness on you to humble you for some redemptive purpose and to perfect you through all this suffering’ (p. 23).

Wommack believes the cross of Jesus has already redeemed believers from sickness and disease and purchased complete physical healing for them. ‘Healing is a done deal, and is available to us now exactly the same as forgiveness of sins’ (p. 13). Moreover, the cross also redeems believers from financial poverty. In 2 Cor 8:9, Paul says that Jesus became poor so that through his poverty believers might become rich. Wommack takes Paul literally. Jesus’ death and resurrection provide for Christians ‘forgiveness of sins, healing, deliverance, and prosperity’ in this life (p. 20).

All this raises an enormous question: if God wants all believers to be well, why are so many believers notwell? Wommack’s answer is mercilessly logical, crystal-clear, and repeated frequently throughout the book. Here’s an example: ‘If God wants us well, and we aren’t, this means we have to accept some degree of responsibility’ (p. 41). Some people don’t experience healing ‘because they don’t understand how to receive healing properly’ (p. 43). Wommack hereby absolves God of responsibility for the sickness and poverty of believers, but in so doing, he lays that responsibility at the feet of the sick and the poor.

What are the pastoral results of this theology? The devastating consequences are clear in Wommack’s story of a young couple with a brain-damaged four-year old son who died despite fervent prayers for healing (pp. 44–47). Wommack told the grieving parents, ‘I don’t believe this was God’s will.… He didn’t allow this to happen.… It’s either my fault, your fault, both of our faults, or things that we don’t understand.’ The grieving couple prayed, ‘and God showed them some areas where they had allowed fear, doubt, and unbelief in. This had hindered their faith and kept them from receiving the miracle they needed. Because they received the truth, they repented and were able to overcome that fear.’ Note what Wommack says here: the parents’ sin of unbelief resulted in the death of their child. They were responsible and needed to ‘repent.’ What has gone wrong enough in Wommack’s thinking to lead to such cruelly devastating pastoral counsel? I’ll highlight here four significant problems with Wommack’s book.

First, Wommack embraces a terribly over-realized eschatology. He argues that illness and even death (p. 88) can be overcome in this age. The Bible never makes such a promise. It suggests, to the contrary, that the total removal of sickness and death must wait until the last day and the age to come, at which point God will swallow death and wipe away all tears (Isa 25:8). In this age, our ‘outer nature’ is wasting away (2 Cor 4:16), and only at the coming of Jesus will we receive resurrection bodies (1 Cor 15:23). That’s why Paul says we are waiting for the redemption of our bodies (Rom 8:23). Wommack’s theology is unable to account for the universal presence of human death, which is the ultimate and most radical form of sickness and disease. Does every human death imply a specific lack of faith for healing? Wommack appears to suggest just that (p. 88). But the Bible indicates that in this present, sinful age, men are appointed by God to die (e.g., Ps 90; Heb 9:27) and nowhere promises that death will be overcome in this age. In fact, even the people Wommack claims to have raised from the dead will all die one day. None has been granted a resurrection body in this age.

Second, Wommack ignores the many biblical passages that contradict his teaching. The clearest example of this is his complete lack of reference to Job. In Job’s view, his suffering is the will of God: ‘The Lord gave, and the Lord has taken away; blessed be the name of the Lord’ (Job 1:21). Job specifically attributes his sickness to God (2:10), and Job does not sin in what he says (1:22; 2:10). Equally striking is Wommack’s complete bypassing of 1 Cor 11:27–32. This passage demonstrates that in some cases the illness and even death of believers is the will of God. It therefore flatly contradicts Wommack’s claim that Jesus would not ‘put sickness on you’ (p. 23).

Third, Wommack argues that Christians are redeemed from sickness and poverty but not from persecution. This distinction does not hold up in the real world because persecution for the name of Jesus frequently causes poverty, lack of physical well-being, and sickness (Heb 10:34). Paul was certainly not prosperous (cf. 1 Cor 4:11), and in Rom 8:35 he places ‘famine’ alongside persecution as things that happen to Christians. If persecution still persists in this present age, why not sickness? Wommack’s answer is that God allows the persecution of Christians because he loves the persecutors and wants them to repent (pp. 76–77). But Luke 22:42 suggests another reason: Jesus understands that his crucifixion is the will of God. God did not want Jesus ‘well’—God wanted Jesus dead in order to accomplish his great redemptive purposes (Isa 53:6; Rom 8:32; Luke 22:42; Acts 2:23; 4:27–28). If God in his wisdom willed the suffering and death of his own Son, can he not will suffering and sickness for the followers of his Son in order to accomplish his sovereign purposes?

Fourth, Wommack’s interpretation of the Bible results in a strange and unbiblical portrait of a God removed from the details of life. God becomes remarkably absent in Wommack’s portrayal. Many Christians testify that much (or even most) of their growth in holiness has occurred through suffering (cf. Ps 119:67, 71). But according to Wommack, although someone may learn character-transforming lessons through illness, that was not God’s plan. Apparently all this character-transformation through suffering happens apart from God (pp. 75–76). Later in the book, Wommack presents an almost deistic vision of God, who sets up ‘laws’ of healing and is then severely limited by those laws. The healing of individuals is ‘not now up to God; there are laws through which our faith has to function’ (p. 140). In this highly mechanistic view, one just needs to know the laws of healing and apply them properly for the healing to ‘work.’ If you don’t follow the rules and say the right thing, God can’t heal you even though he wants to (p. 143).

Other critiques could be added, including Wommack’s lack of even basic knowledge concerning matters of biblical interpretation such as text criticism (see especially chs. 12 and 14). At the end of the day, Wommack’s pastoral concern in writing the book is genuine but misguided. He thinks the view that God wills sickness embitters people against God (p. 12) and makes them passively lie down under their illnesses (p. 24). But this is not necessarily the case. In fact, belief in God’s sovereignty over sickness and suffering has proven a tremendous comfort to countless Christians through the ages. Sarah Edwards’ letter upon learning of the death (through illness) of her husband Jonathan is one example: ‘Oh that we may kiss the rod, and lay our hands on our mouths! The Lord has done it. He has made me adore his goodness, that we had him so long.’ Again, the view that God wills sickness for his people clearly does not require a passive response to suffering. Wayne Grudem’s Systematic Theology is proof of this: it advocates both the view that God is sovereign over sickness and the view that believers should ‘eagerly and earnestly … seek God for healing’ (p. 1069).

Where the theology of God Wants You Well is embraced, Christians will come to have smaller views of God and an unbiblical, joy-killing, guilt-producing understanding of their responsibility for sufferings that are in fact beyond their control and totally within the control of a sovereign, loving God. For the protection and strengthening of God’s people, it is important for pastors to be aware of this book (and the theology it represents) and to be able to articulate a truly biblical understanding of the relationship between God, suffering, and sickness.

Stephen Witmer is the pastor of Pepperell Christian Fellowship in Pepperell, Massachusetts, is an editorial board member of Themelios, and teaches New Testament at Gordon-Conwell Theological Seminary.