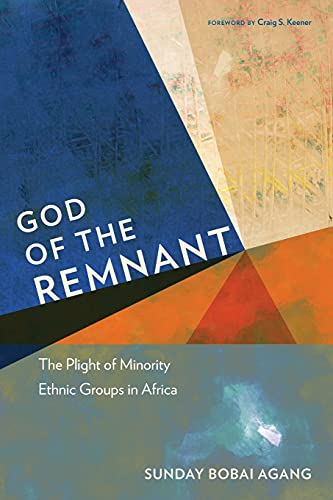 God of the Remnant: The Plight of Minority Ethnic Groups in Africa

Is there a unique significance for minority ethnic groups in the biblical theme of God’s preservation of a remnant? Sunday Bobai Agang, a Nigerian theology professor, explores this question in his concise book, God of the Remnant: The Plight of Minority Ethnic Groups in Africa. Agang argues that God, because of his character and covenants, preserved and used remnants in the past, and therefore can and will use remnants––minority African ethnic groups––today.

Agang’s pastoral tone communicates empathy for African minority groups who may feel ignored by God and uncared for by the world. The audience, appeal, and application go well beyond minority groups to encompass majority groups and the global church as Agang implores them to consider the implications of remnant theology in their lives.

Chapters 1–3 provide a basic background to remnant theology with select examples focusing on the Old Testament. While the book does not attempt an exhaustive analysis of remnant theology, the point is adequately made that God is sovereign in the preservation of his people, that God is gracious to save some from judgment, and that God is kind to provide hope of future renewal. Remnants in the Bible were small, vulnerable communities simply fighting for survival in harsh contexts. Agang serves his reader by showing the relevance and significance of biblical remnants to his contemporary context instead of trying to be comprehensive or academic in his analysis of remnant theology.

By applying the principles of the remnant to present day minorities, chapter 3 links the biblical category to contemporary peoples. Agang broadens the definition of those who may identify as a remnant by including sufferers of physical and emotional abuse (p. 18). General principles about the remnant of Israel are applied to minority groups today in order to provide encouragement and hope to oppressed peoples. Agang’s identification of survivors of personal trauma, life challenges, or minority groups with the title of remnant extends beyond the normative biblical usage of the term. Instead of a direct exegetical argument, he takes as a presupposition that “God does not ignore a remnant. And if he cares for remnants, he will undoubtedly also care for minorities” (p. 69). This book prefers to describe such minority groups using the language of remnant instead of employing other biblical terms such as sojourner, pilgrim, alien, or stranger that may better clarify the experiences of many Christians in a broken world. Agang humbly acknowledges some of these same questions in several chapter introductions while leading his readers to accept the broad application of biblical principles in the context of minorities (pp. 25–26).

Section 2 of the book (chs. 4–5) explains the relationship and implications of God’s character and covenants to remnants, thereby bolstering the overall theological argument. God has consistently chosen particular, minority people in order to preserve his people to be agents of universal blessing (Abraham, Israel, David). Agang acknowledges the undeserving, sinful nature of all peoples (including ethnic minorities), but points to the covenantal love and faithfulness of the Creator God who protects and preserves his people for his purposes.

God’s actions of preserving and blessing a remnant serves as a basis of hope to persecuted, suffering survivors and minorities. Agang reminds brothers and sisters in Christ that God sees, remembers, and loves them so they do not need to accept hardship as evidence of abandonment by God. Instead, he admonishes them to find hope in the fact that God consistently uses the outcast, weak, and lowly for his glory and name’s sake.

In chapter 6, Agang offers an honest assessment of the hardship and obstacles that minorities face. Suffering is caused by both personal disobedience that has brought God’s judgment as well as the willful sin brought on by others. Readers may be justified in viewing the seventh chapter’s discussion of general assumptions as tangential to Agang’s overall argument in that the chapter did not clearly connect to remnant or covenant theology.

The final chapters offer modest, practical advice for both majority and minority groups to self-assess their hearts and actions with the goal of personal, societal, and church transformation. Agang concludes with affirmations and challenges that offer hope in Christlikeness and not quick, easy fixes. Like the remnant of Israel, the desire of this book is to see minority remnants offer hope, light, and a future as they look to and point others to their sovereign covenant-keeping God. Readers who expect a comprehensive biblical theology of the theme of remnant may not be fully satisfied, while pastors seeking to minister to those who feel forgotten will find meaningful encouragement amply supplied.