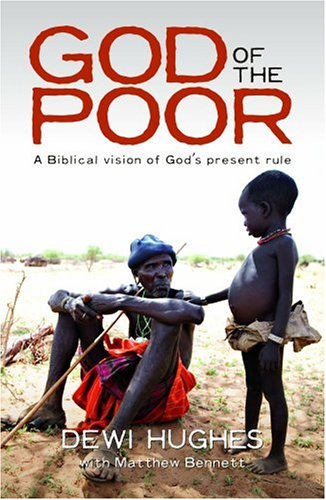 The daily bombardment on our screens of the atrocities suffered around the world makes God of the Poor of continuing relevance to readers of Themelios. Indeed, it is precisely because we don’t seem to be getting any better at dealing with conflict and poverty that this is such a timely, if sober, book with which to prepare ourselves, if you’ll forgive the cliché, for a new millennium.

It is clear from the title what the book is about and the fact that Hughes and Bennett are both theologians who work/have worked for Tear Fund means that it comes as no surprise to see them doing what they do best—theologising on issues such as overseas development, social justice, ethnic cleansing, population control and the environment.

The book takes as its overarching theme the Kingdom of God and explores the implications of this with regard to the world’s poor. Within this grand schema, the book is divided in two. In the first section, solid biblical foundations are laid. These include biblical views on the place of law, the role of the church, and the status of wealth within the Kingdom. In section two, our attention is directed to practical applications and each chapter lays out the big issues, illustrates them well with contemporary examples and then seeks to offer a biblical response. In each case the chapter closes by offering helpful guidance on further reading. The book ends with a six-page prayer which appropriately wraps up the conclusions reached.

It is clear from the outset that the authors are well informed and also clear communicators who succeed in providing balanced conclusions when they touch on controversial themes (which is most of the time!). In addition, they should be particularly congratulated for tackling head-on the subject of spiritual warfare. As they themselves recognise, it is a subject that is often glossed over in this context, yet they are persuasive in arguing for its relevance and point out that development workers dodge the issue to the detriment of their work. To illustrate this they tell the story of an Ugandan hospital that had recently identified three wells in nearby villages requiring protection from animal and human pollution. The clean water could then be piped to those in need, thus improving the health of the villagers. At first sight it would seem a straightforward project, but less so when we are made to understand that there is a local suspicion that the wells are haunted. Some believe that a creature, half man and half fish, visits at night and will cause the wells to dry up if they are interfered with. As Hughes and Bennett point out. ignoring these forces and the strong beliefs surrounding them would be to put the whole development process in jeopardy. It is for this reason that a discussion of the theology involved is so valuable, especially for development workers and ministers who regularly face such dilemmas.

On subjects such as this, the book unapologetically assumes evangelical premises, although it is not afraid to challenge assumptions when necessary. On occasions, however, it is a shame it makes so much of its evangelical roots since in doing so, it reduces the number of potential non-evangelical readers. Nevertheless, evangelical or otherwise, it is quite clear that readers cannot fail to be challenged by the issues presented and, though it is not particularly unique in its message, it is still one that desperately needs to be heard and particularly by those of us wishing to make practical use of our theology.