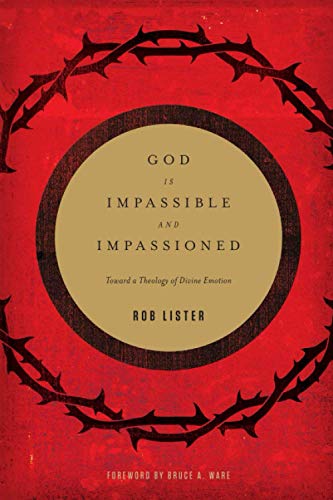 Rob Lister’s God Is Impassible and Impassioned is a compendious study of the difficult subject of divine impassibility. It is an informative book that surveys the eras of development and criticism of this doctrine starting from the Patristic era to the modern day. While this doctrine still suffers from much misunderstanding in both passibilist and impassibilist camps, Lister does the church a great service by recovering the early church fathers’ understanding of this perfection of God. While this work is worthy of high praise, there are some areas that perhaps need calibration.

First, one who is well-versed in this conversation may be initially disappointed with the lack of interaction with the wider breadth of scholarship (e.g., Hegel, Fichte, Schelling, liberation theology, feminist theologians, etc.). The monograph, however, is geared towards, and successfully accomplishes, representing underrepresented evangelical voices (e.g., Gerald Bray, Paul Helm, John Stott, John Feinberg, John Frame, and Millard Erickson). Lister aptly suggests that even some evangelicals have misrepresented divine impassibility by operating with passibilists’ assumptions regarding this attribute, namely, that an impassible God has no emotional capacity. This insight warrants commendation.

Chapter one begins with the thesis that the doctrine of God has undergone many revisions in the modern day due to false assumptions about impassibility. Passibilists have chided classic theists’ adherence to this “archaic” doctrine on the basis of (1) biblical depictions of divine passions, (2) the love of God, (3) a suffering Christ, and (4) objections based on the problem of evil—a God who does not suffer with us cannot be loving. This chapter takes the audience into historical debates concerning patripassianism and theopaschitism, though however brief, which builds the platform for the author’s main thesis: impassibility historically meant that God cannot be manipulated, overwhelmed, or surprised, not that God is devoid of proper affections. Lister thus far falls squarely within the orthodox camp.

Chapters two and three, however, are where experts in the Greco-Roman world and the early church may begin to second-guess Lister’s reading of these areas. Lister is correct to note that the Hellenization hypothesis—the early church fathers were taken captive to Greek metaphysics that contorted the identity of God as static—is a misrepresentation of the fathers. In order to prove his thesis, the author first surveys the Stoics, Middle Platonists, and Neo-Platonists along with a brief section on Philo. While the overall thesis is sound, the author’s dependence on secondary literature leads him to state that the Stoics never attributed apatheia to their god and that the Stoic deity knew no joy. Seneca’s Moral Essays (e.g., “On Providence”), however, reveal a different story. While an explicit application of the term is difficult to locate, the concept was clearly attributed to their deity.

In chapter three, Lister contends that Irenaeus, Tertullian, Origen, Gregory Thaumaturgus, Lactantius, Athanasius, Gregory Nazianzus, Gregory Nyssa, Augustine, and Cyril of Alexandria believed that impassibility and God’s self-determined affections work together—“The Qualified-Impassibility Model.” The reader, however, comes to wonder why Augustine is included in this model when it is well known that Augustine viewed God’s emotions as acts of providence which later theologians adopted (e.g., Anselm, Aquinas, and Calvin). Furthermore, in an attempt to demonstrate theological diversity in the early church, Lister categorizes Justin Martyr and Clement of Alexandria under “The Extreme-Impassibility Model”—impassibility and divine emotions cannot work together—which I find injudicious. A closer inspection of Justin’s works (e.g., First Apology, 28) along with Clement’s (e.g., Stromata, 2.16) reveal that these theologians deserve to be treated under the former heading while Augustine should go in the latter.

In chapter four, Lister surveys notable figures such as Anselm, Aquinas, Luther, Calvin, and Stephen Charnock. He rightly concludes that for many of the early fathers divine emotions were movements of the mind while for Anselm, Aquinas, and Calvin, God’s emotions were acts of the will. Yet, confoundingly, he still contends that the medieval and early church fathers’ views are similar. In chapter five, he addresses passibilists’ (e.g., Jürgen Moltmann) take on issues regarding theodicy, biblical interpretation, presuppositions regarding divine love, and their appropriation of Rahner’s Rule—“The economic Trinity is the immanent Trinity and the immanent Trinity is the economic Trinity” (p. 135). While Lister faults Moltmann for his “dependence” on Rahner’s rule, it is more accurate to critique Moltmann’s “radicalization” of Rahner’s Grundaxiom as Rahner himself evidenced areas in his writing that defended divine impassibility.

While chapter six surveys evangelical theologians, chapters seven through ten comprise his constructive sections. I concentrate on chapter ten, his Christological reflections. Lister’s main thesis is that “Jesus experienced human emotion during the incarnation, not because the divine nature is incapable of emotion, but . . . as a man in dependence on God” (p. 262). Two critiques can be raised. First, while Lister is correct to note that Jesus’ emotions are human emotions, he states that at Gethsemane Jesus was “overwhelmed” at the prospect of bearing the wrath of God. After advocating Cyril’s paradoxical Christology, one wonders why he contradicts it at this point. Second, Lister advocates “A Spirit-Regulated, Asymmetrically Accessing, Two-Minds Model,” where the Spirit regulates and restricts the human mind from accessing the divine mind. While this model is certainly interesting, it is difficult to prove exegetically and actually drives a wedge between the two natures of Christ.

While I have raised quite a number of critiques, to be frank, I find Lister’s book both informative and well-done. It is a recommended read for both novice and expert. The conversation on divine impassibility is a difficult one that crosses into many challenging subjects such as time and eternity, theodicy, hermeneutics, and so forth. Lister has brought these subject matters to a level that is both accessible and persuasive. I thank him for his valuable contribution to the academy and to the church.