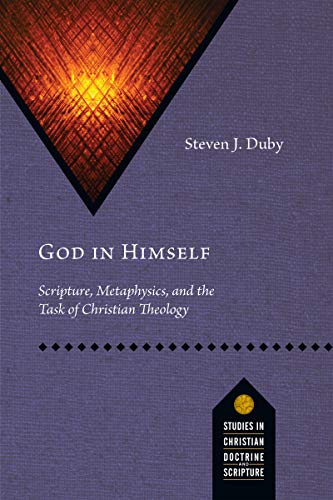 God in Himself: Scripture, Metaphysics, and the Task of Christian Theology

The volumes in the Studies in Christian Doctrine and Scripture series, edited by Daniel J. Treier and Kevin J. Vanhoozer, seek to foster the production of constructive material in systematic theology through a thoughtful engagement with Scripture as a foundational principle for Christian doctrine. Steven J. Duby, research fellow at Phoenix Seminary, is the author of God in Himself: Scripture, Metaphysics, and the Task of Christian Theology, the fourth book in the series.

Duby’s central argument in God in Himself is that natural theology, metaphysics, and the incarnation should be brought together appropriately to inform construals of Christian theologia, that is, the discourse about the life of God in Himself without taking the divine economy as its prime reference. Concurrently, God in Himself seeks to outline the rationale and practice of Christian theologia to rehabilitate the combined use of natural theology, metaphysics, and the incarnation in theology proper.

The book’s five chapters follow a sequential line of reasoning that establishes a cumulative case for its chief thesis and gradually weaves its intended objective. Chapter 1 explores aspects of theological knowledge, such as its purpose, object, nature, limitations, and developments, according to the scriptural narrative of redemptive history. The chapter ends with some theological considerations concerning the boundaries of human discourse about God in himself and the potential problems arising from Martin Luther’s notion of Deus absconditus (the hidden God).

In chapter 2, Duby discusses the role of natural theology (natural knowledge of God) as a foundational principle for the practice of Christian theologia. Duby exegetes several passages in Scripture to deploy a biblical concept of natural theology and offer some theological conclusions about its origin, content, and purpose. Chapter 2 also includes a historical overview of natural theology according to representative theologians from the patristic, medieval, Reformation, and post-Reformation eras, followed by a response to modern objections to natural theology.

Chapter 3 investigates the role of Christology—primarily expressed in the doctrine of the incarnation as understood within the context of supernatural revelation—in informing theology proper. Here, Duby weighs on the relation between Christology and theology proper by critically assessing and responding to the thought of notable contemporary theologians, including, among others, Karl Barth, Eberhard Jüngel, and Robert Jenson. Lastly, Duby expounds on the positive contributions of Christology in communicating knowledge of the Triune God in his transcendence of the economy.

Chapter 4 revises the relation between theology and metaphysics. This chapter includes a survey of common criticisms about the so-called “metaphysical” depictions of God. Then, it traces back in history the development of metaphysics in its philosophical and theological usages from Aristotle to the Early Modern era. This chapter argues for legitimate incursions of metaphysics in theology proper, namely, metaphysical reasoning without obfuscating the ontological distinction between Creator-creature.

Finally, chapter 5 retrieves a doctrine of analogical predication suitable for contemporary accounts of God. First, Duby explores the biblical teaching on the transcendence of God and his communicative activity and how these themes have been understood historically vis-á-vis analogical and univocal predication. In the last section, Duby analyses and retorts contemporary concerns regarding the construct of analogy (and its sufficiency) in light of divine otherness and sovereignty.

While God in Himself touches upon subjects such as the doctrines of the divine attributes, the Trinity, and the divine decree, these treatments are neither explanatory nor comprehensive. Instead, they support the central thesis and purpose of the book. Thus, it would be better to classify Duby’s book as a prolegomenon for the doctrine of God rather than as a study exclusively circumscribed to the construal and explanation of the classical themes included in systematic treatments of theology proper.

One of the most notable strengths in Duby’s book is the conscious appeal to Scripture (deployed as theological exegesis) for the formulation of Christian doctrine. This quality is observed throughout God in Himself insofar as Scripture functions as the epistemic principle from which the author draws to elaborate on his theological propositions. Another forte of the book is that it recognizes the importance of catholicity for Christian scholarship. Duby recurrently engages in theological retrieval from the patristic, medieval, and post-Reformation eras to inform his construals, which later are put to the test when he enters in critical dialogue with modern objectors to his theses. The insights about biblically compatible metaphysical principles for the construal of theology proper (chapter 4) and that of the reappraisal of analogical predication to speak of God (chapter 5) should be, by themselves, enough to prompt the interest of academics to Duby’s thesis.

Though lucid in its argumentation and pastoral in its tone, Duby’s book is not for popular consumption. Instead, God in Himself is a technical and sophisticated study primarily for the attention of theologians and biblical scholars.

Overall, Duby’s book is an outstanding achievement in the field of systematic theology. Emulating the works of the Reformed scholastics, God in Himself makes a compelling case for the legitimate use of natural theology, metaphysics, and Christology to talk about the inner life of God apart from the divine economy.