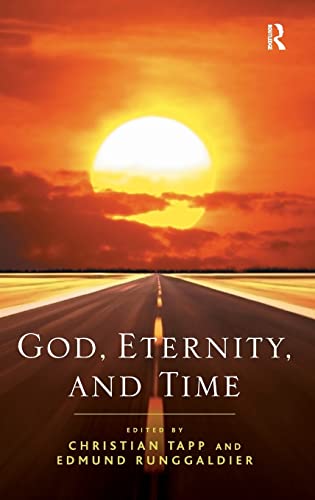 In 2008, a conference was held in Munich to discuss the philosophical and theological issues surrounding divine eternality. This volume collects the papers from that conference. The intent was to bring together an international group of scholars from various disciplines and perspectives. The papers in section 1 defend divine timelessness; section 2 deals with divine omniscience and human freedom; section 3 discusses the so-called “Third Way” between divine timelessness and divine temporality; and section 4 ends the volume with issues related to divine temporality and science.

The first paper of the volume is “On Existing All at Once” by Robert Pasnau. In my opinion this is the best paper of the book. It contains a much-needed careful reading of medieval and scholastic texts on divine eternality. In our day theologians and philosophers continue to force anachronistic theories on the philosophy of time onto the classical tradition. Pasnau’s paper takes a close look at the perfection of eternality. What is the perfection that classical theologians predicated of God? The perfection is existing all at once. This is a perfection found in creatures who endure through time by existing as a whole, or all at once, at the present (the only moment of time that exists).

Eleonore Stump defends divine simplicity and timelessness. One of the objections to divine timelessness comes from omnipresence. How can a timeless God be present to temporal creatures? Stump gives a fascinating discussion of the nature of personal presence. However, her defense of simplicity and timelessness are oddly quick and vague. It is not clear how her account of personal presence can be instantiated by a timeless and simple God.

Thomas Schartl ends the section on divine timelessness with his paper “Why We Need God’s Eternity.” He seeks to defend divine timelessness against divine temporality as seen in contemporary systematic theologians like Wolfhart Pannenberg and Robert Jenson. The accounts of divine temporality among contemporary systematic theologians are very different from those developed by contemporary philosophers of religion and are subject to unique critiques. For instance, Jenson places God in the future, which makes it impossible to explain how God is present to creatures. Jenson’s account also makes the Son eternally incarnate. Schartl attempts to avoid these problems by maintaining divine timelessness.

Linda Zagzebski’s “Eternity and Fatalism” starts off the section on omniscience and human freedom. The main thrust of her paper is to argue that divine timelessness does not have any advantage over temporalism in solving the problem of divine foreknowledge and libertarian free will. Zagzebski fans will find this essay to be a nice concise treatment of her previous work. Christoph Jager concludes this section by critiquing the standard accounts of Molinism. He offers a careful interpretation of Molina that will be important as the debates over Molinism continue.

Christian Tapp kicks off the section with a discussion of infinity and eternity. He distinguishes three types of infinity. There is quantitative, comparative, and metaphysical infinity. Temporalists see God’s eternity as quantitative in that God exists for an infinite amount of time: without beginning and without end. Atemporalists see eternity as metaphysical in that God is pure act and unsurpassable. Tapp points out that temporality fits with the biblical portrayal of God, yet he worries it may put God on the same level as creatures. Temporalists disagree and say, along with the atemporalist, that God is infinitely greater than creatures. Tapp notes, however, that this blurs the distinction between quantitative, comparative, and metaphysical infinity. He offers some ideas in mathematics that might help theologians disentangle these issues.

Alan Padgett’s paper updates his model of relative timelessness. I still find this such an unfortunate name because God, on Padgett’s model, is thoroughly temporal. On Padgett’s view God’s time is infinite and immeasurable. Prior to creation God exists in a temporal vacuum—a state of pure duration without change. Since time is the possibility of change, it can exist without change. When God creates, he brings succession and change into his life. Padgett deals with various biblical issues before offering a critique of William Lane Craig’s claim that God is timeless sans creation and temporal with creation.

Reinhold Berhardt ends this section with a model of timeless action. Instead of offering an analogy of the personal God’s action based on personal agency, Berhardt suggests an analogy based on the non-personal force field. He claims his own view is of a God who is non-timely, but not timeless, but he never clarifies the difference between non-timely and timeless. Berhardt also offers a Trinitarian approach to divine action that is equally obscure. The first divine Person is the atemporal aspect of God, the second Person is related to all of time simultaneously, and the third Person is present in time. After affirming the A-theory of time—on which the future does not yet exist—he places God in the future. I don’t understand why some systematic theologians want to place God in a non-existent future. This is basically asserting that God does not exist. I hope that Berhardt, just like Pannenberg and Jenson, does not really mean what he says.

The final section deals with issues related to divine temporality and science. William Lane Craig examines an argument for divine timelessness based on Einstein’s interpretation of the Special Theory of Relativity. His essay here is a concise treatment of his previous work and would be a nice place to start for those unfamiliar with Craig’s approach to this topic.

Hans Kraml concludes the volume with an essay on the process view of eternity. Despite offering an interpretation of classical theology that Pasnau’s paper refutes, Kraml’s essay presents a clear and brief account of process views on God and reality.

This volume is for advanced students. I would not recommend it as an introduction to divine eternality since it contains technical discussions that assume a familiarity with the philosophy of time and theology. Its strength lies in bringing together experts in systematic theology and philosophy of religion, something that is not easily done. The main weakness of the book is that many terms are left undefined. For instance, several authors assume a distinction between atemporality and timelessness, but no one states what such a distinction could be. Overall this is an important collection of essays on divine eternality, and a must-read for those who are invested in this topic.